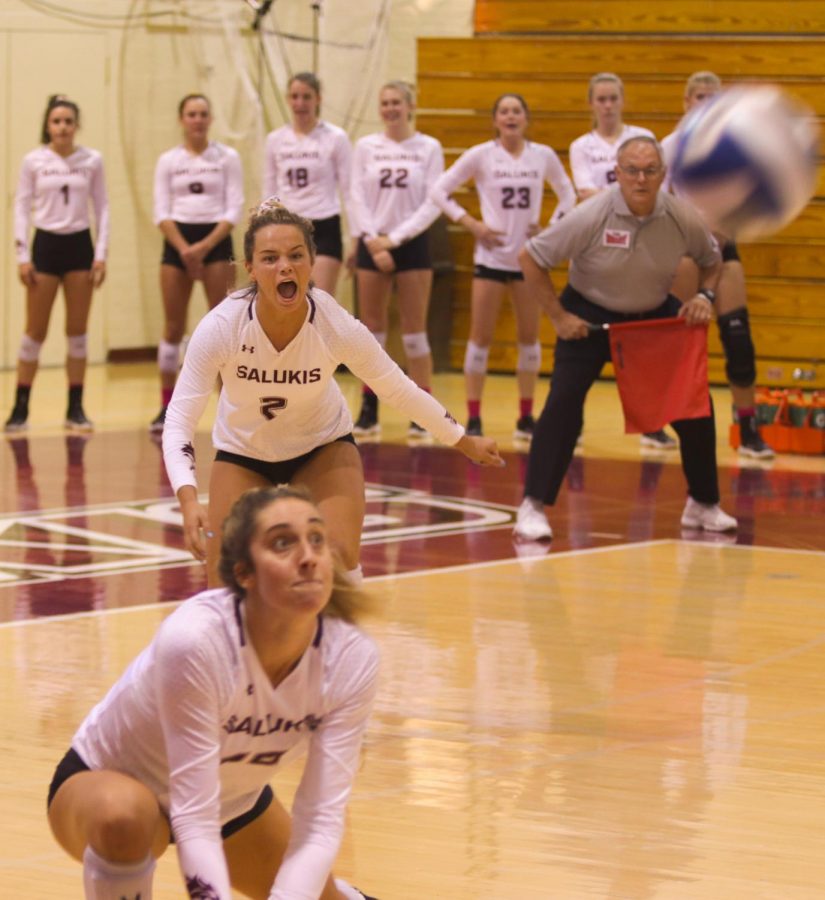 Saluki junior Lindsey Paulsen hits the ball on Friday, Oct. 4, 2018 during the Salukis 3-1 win against Drake University inside Davies' Gym.

In their first conference match at home, the Southern Illinois University Saluki volleyball team took down the Drake University Bulldogs in four sets.

SIU defeated the Bulldogs 25-19 and 25-20 in the first two sets before falling to Drake 25-22 in the third set. The Salukis, however, were able to rally to beat the Bulldogs 25-18 in the fourth set to secure the match.

First-year head coach Ed Allen said tonight’s win was made possible by the team’s ability to remain relentless throughout a match.

“Our [team] showed some resilience,” Allen said. “We’re not the kind of team that can play consistently for an entire match, so we’ve got to deal with the valleys, and I thought we managed that pretty well. We were able to come back and make a significant run there in the fourth set to put it away.”

Junior opposite hitter Hannah Becker had a career-best 19 kills for the night to lead the Salukis to the victory, which Allen attributed to her ability to make a smart and aggressive play.

“I thought it was an incredible match for her,” Allen said. “She’s been sick, she missed a practice earlier this week […] and she found a way to do exactly what needed to be done. She’s been highly aggressive and highly intelligent with what she does with the ball as well.”

Junior setter and outside hitter Rachel Maguire recorded yet another triple-double for the season as well, tallying 10 kills, 18 assists and 12 digs, which will allow her to remain a leader in triple-double stats in the conference as well as in the NCAA.

Tonight’s win over Drake, being the Salukis’ second conference win, beats out SIU’s 1-17 record in MVC play last year. In addition, their tenth season win now doubles the total amount of wins they were able to achieve last season.

Drake (7-10, 1-3 MVC) kicked off their conference season last weekend as well, and most recently has dropped a 3-1 match to the Loyola University Chicago Ramblers on Monday, Sept. 30.

Allen was impressed with his team’s performance to start off the match.

“I thought we played the first set as well as we’ve played any set all year long from start to finish. We had consistency for all 25 points,” Allen said.

In the first set, two kills from junior outside hitter Savannah Sheridan and a service ace from sophomore defender Katy Kluge forced Drake into an early timeout with Southern up 8-4.

The Salukis used a strong offensive effort to push further away from the Bulldogs; junior opposite hitter Hannah Becker put down two kills in a row and senior middle blocker Emma Baalman put down one to push SIU to the 13-6 advantage.

Drake continued to battle with the Salukis, with senior middle blocker Elle Tubbs finding four kills during the set and hitting at a .571 percentage.

The Bulldogs, down 22-16, forced the Salukis into a timeout after a 6-1 run brought them back in the game, but it was from here that SIU made their final push to take the first set.

The Salukis were a force at the net during the set; junior middle blocker Lindsey Paulsen recorded one solo block and three block assists, while junior setter and outside hitter Rachel Maguire had two block assists.

Southern also proved to be a threat at the service line in the set — Kluge had a total of three aces and Baalman added one.

It was Drake that found momentum early in the second set, taking an 8-3 advantage with the help of two kills from junior opposite hitter Emily Plock.

SIU worked to fight their way back in the game with the help of three kills from Paulsen as well as four consecutive kills from Becker, which lessened the deficit to 13-12.

Both teams continued back-and-forth from this point, but SIU was able to edge ahead to take set two.

The Bulldogs broke away from the Salukis 10-5 early into the third set, with freshmen outside hitters Haylee Kent and Michele Rabbitt working to keep the Bulldogs in the lead, both contributing three kills each early on.

SIU, down 19-12 to the Bulldogs, tried to find momentum as Becker put down four kills in a row, but Drake overpowered them to take the third set.

Southern trailed early in the fourth set, but were able to use a powerful 5-1 run to tie the set 13-13 with Drake.

The Bulldogs worked to stay in the game with SIU, Rabbitt finding two kills to keep Drake within two of SIU while down 18-16. Drake wouldn’t be able to find a way past the Salukis, however, as Southern made a 5-1 scoring run to finish the game.

SIU recorded a total of 10 blocks for the match, which Allen sees as an improvement.

“Our blocking is getting better. We’re recognizing situations better and positioning ourselves better […] and it’s certainly helping our defense a lot,” Allen said.

Looking for another conference win, Southern Illinois plays at home again tomorrow night with a match against the University of Northern Iowa Panthers (10-8, 4-0 MVC). First serve is set for 5 p.m. at Davies Gym.