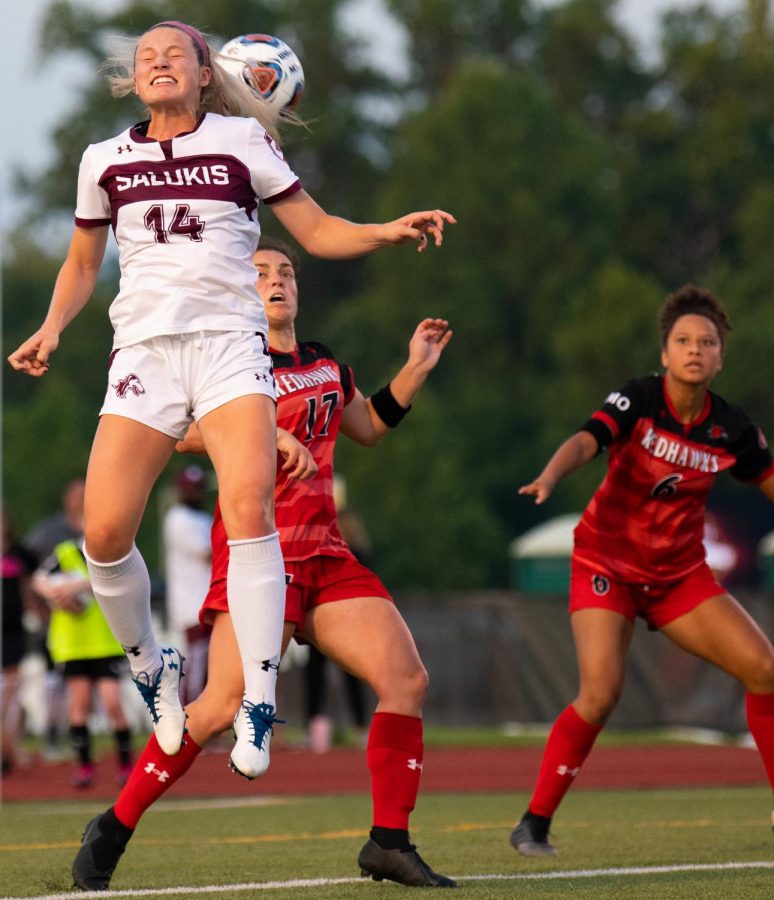 This Sunday, the Southern Illinois University Saluki women’s soccer team will travel to Cape Girardeau, Missouri, to face the Southeast Missouri State University Redhawks for a shot at redemption.

Earlier this season, the Salukis faced the Redhawks in an exhibition match held at SIU at the Lew Hartzog Track and Field Complex for Southern Illinois’ first women’s soccer event in history.

During the match, which was held on Aug. 17, SIU fell 2-1 to SEMO. Southeast Missouri jumped out to an early 1-0 lead during the first half, but Saluki freshman forward Liz Bretchel tied the game up with a goal early in the second half. The Redhawks, however, found a late goal that would score them the win.

Despite the loss, first-year head coach Grant Williams was pleased with how his team performed in their inaugural game in front of a crowd of over 2,100 people.

“I told the players that you can only make a first impression once. We just wanted to make sure that anyone who came out tonight recognized that we play the game the right way and work hard,” Williams said following the exhibition match against SEMO. “I have no complaints about the result.”

Since the exhibition match, the Salukis have compiled a 4-7-1 record, with two games lasting into overtime. Most recently, SIU suffered a 4-1 loss to the University of Texas Rio Grande Valley Vaqueros on Sunday, Sept. 29.

The Redhawks, who are in their twenty-first season as a program and who have been with head coach Heather Nelson and assistant coach Paul Nelson since the beginning, have recorded so far a 5-4 record for the season, and are 3-1 in the Ohio Valley Conference.

Prior to Sunday’s match, Southeast will take on the Southern Illinois University Edwardsville Cougars on Oct. 3, and the Redhawks are coming off of a 5-0 loss to the Murray State University Racers on Sept. 29.

Since facing one another, both SIU and SEMO have faced mutual opponent Belmont University. Southern was able to defeat the Bruins in a 1-0 shutout on Aug. 30 at home, while the Redhawks faced them on Sept. 20, taking the Bruins down 2-1.

Following Sunday’s loss to UTRGV, Williams said, for the Salukis, his team will need to have the attitude of playing to win in order to finish on top.

During the exhibition match against the Redhawks, SIU was able to allow all 27 athletes on the roster to see time on the field. In matches following, this has not been the case, but Williams said, while both teams have had time to work with different lineups, the Salukis’ isn’t perfect yet because they’re still improving.

“[SEMO has] had the same amount of time to solidify their lineup, to identify what’s working and not working, and those kinds of things,” Williams said, “[whereas] we are still in a process of just learning.”

Williams said overall, he expects SEMO to be even tougher competition this time around, especially with the home-turf advantage.

“When we saw them early on, everybody was a work in progress,” Williams said. “Obviously, they will be better […] and, they’re playing at home.”

The Salukis, looking for their fifth season win, will face the Redhawks at 2 p.m. at SEMO’s Houck Stadium.