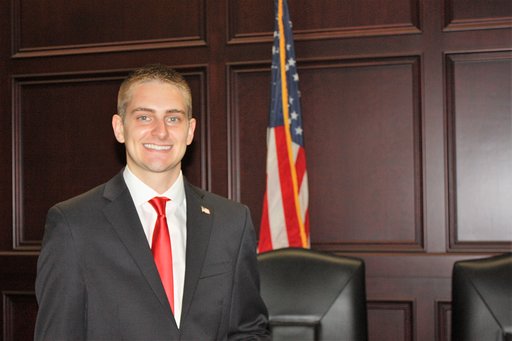 Zachary Meyer announces his running for State Rep in the 115th District on Oct. 2, 2019. Photo courtesy of Zachary Meyer.

SIU alumnus Zachary Meyer announced his plans to run for State Representative of District 115 on Wednesday.

District 115’s current representative is Republican Terri Bryant. Bryant announced she will be running for the 58th District State Senate seat on Aug. 27.

Meyer said he is a Republican and a lifelong Du Quoin resident.

“My experience as a resident of the community, a father and a small business owner have provided me with firsthand knowledge about the difficulties our region faces,” Meyer said. “I firmly believe I have the ideas to help advance southern Illinois, and specifically the 115th District.”

Meyer earned his bachelor’s degree from SIU and will graduate from the university’s law school with his Juris Doctor degree in December.

“I have experience serving the people of Perry County by helping the State’s Attorney’s Office for the past three years,” Meyer said. “The damage that crime and drugs have done to the district is real. I want to help those addicted to drugs, as well as protect our community from dangerous, habitual criminals.”