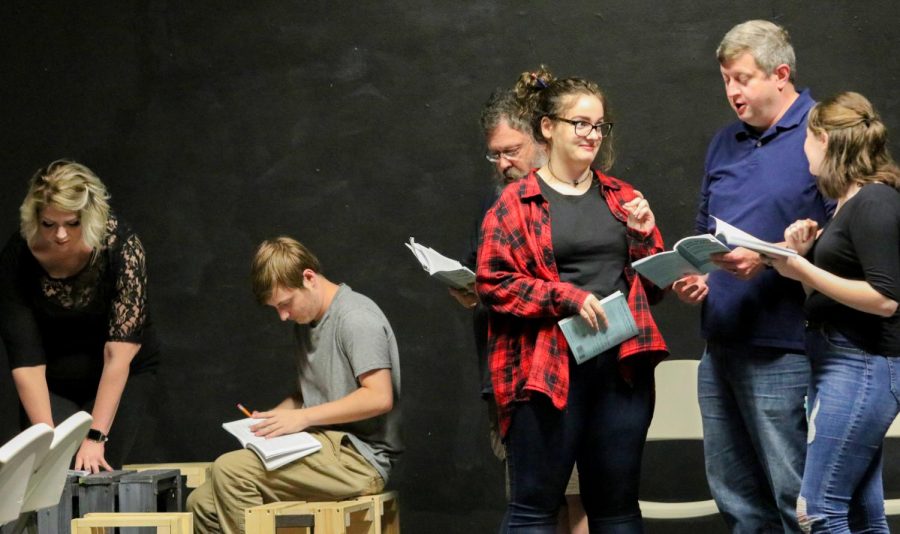 Actors take notes on Wednesday, Sept. 25, 2019 during rehearsal to prepare for their final performance at The Varsity Center in Carbondale.

The Stage Company in Carbondale is ringing in their 38th season with a stage production of the classic true story, “Diary of Anne Frank.”

The historic story of Anne Frank is one that is well-known to so many people, and this year marks the 60th anniversary of the book version.

The stage adaptation captures the realities of eight people hiding from the Nazis in a concealed, storage attic.

Many people remember the chilling story of the Jewish people who were hunted down by Nazis under the rule of Adolf Hitler. Frank’s story continues to stick in the minds of thousands of Americans who cannot imagine the pain and torture she endured.

“The legacy of the horrors that Anne Frank and her family faced continue to live with us now, nearly 75 years after the end of the war,” Tony Salazar, a cast member, said. “A group of people were hunted down, separated, stripped of their humanity and systematically destroyed, to rid the world of their kind because they were born with a specific ethnic membership.”

The show’s director, Jo Ann Hensley, said the stage version of this show is very important to her because of the historical relevance to what people are currently facing in today’s society regarding immigration and racial prejudice.

Hensley said this play holds a lot of importance to her because she remembered when her daughter read Anne Frank’s story for the first time.

“At a young age, [my daughter] could identify and make the connection with a very different time, a very different culture and a very different set of circumstances than she was going through,” Hensley said. “And yet, nowadays, she would absolutely relate to what is going on today with separating children from parents, isolating somebody simply because of their ethnicity. It’s all still there.”

Frank wrote in her diary that poor, helpless people were being dragged out of their homes and families were being torn apart and separated.

“Surely, these terrors are being experienced by young Latina girls hiding behind locked doors, praying for the mercy and salvation of their families,” Salazar said. “Anne’s contribution, and those of others, ensured that the historical narrative was not written based solely on official documents. Instead, it provided a voice to the voiceless, sharing with their descendants, testimonies of the hardships endured by the Jewish people.”

Both Hensley and her assistant director, Jen Goode, said this is a story that still needs to be told.

“I am a high school teacher, and when I first kicked around the idea of directing this play, I told my students that I was thinking about doing this show about Anne Frank, and they responded with ‘that’s great, who is that?’” Goode said.  “These are juniors and seniors in high school who I am sure have been introduced to the topic at some point, but it didn’t stick.”

Hensley and Goode said the Stage Company’s 38th season opener is going to have one matinee during the school day for high school students to attend for a reduced ticket price.

Hensley said the matinee for students will not be open to the public. Goode said she is bringing 60 students to the production as an educational experience for them.

“My students are going to be reading the play in class as well as writing their own journals about what they’ve read,” Goode said.

Not only does this year mark the 60th anniversary of Anne’s book, but Hensley said the dates of the production also coincides closely with the Jewish High Holy Days.

“Because of that, we are trying to make sure that the Hebrew in the play is pronounced correctly,” Hensley said. “There will be a translation so you can understand them, but the idea is that you are to use Hebrew.”

Goode said they have asked experts to help with the pronunciation of the Hebrew language in the show.