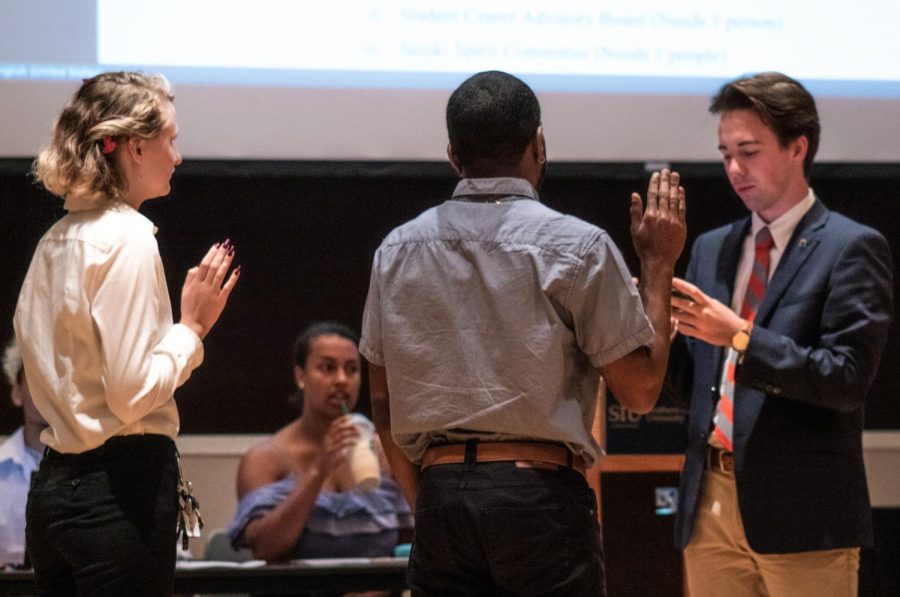 By Brandi Courtois and Keaton Yates

Undergraduate Student Government discussed the search for a permanent provost and vice chancellor of academic affairs on Tuesday at their regularly scheduled meeting.

As of November 2018, the Daily Egyptian reported there were 41 interim positions at the university.

(See more: With over 40 interim positions in administration, SIUC still can’t hire from outside the university to fill them)

President Colton Newlin said he was notified by Interim Chancellor John Dunn earlier today when Dunn said he wanted to start the searches.

Newlin said the search committees need three nominees from the undergraduate student body, and he asked fellow members of USG if they would be interested.

“Pretty much what that means is you would read through everyone’s application; determine their eligibility to come in and interview; and then eventually have a say in who gets to be in the next position,” Newlin said.

Student Trustee Brione Lockett said the positions were important and that senators at the meeting should use the opportunity to get on the committee.

Newlin said USG and Graduate Professional Student Council have been invited to speak with the company involved in the search for the permanent chancellor.

“We will talk with them about our expectations of what type of person they should be looking for to bring to our campus to interview as chancellor,” Newlin said.

In a news release from SIU on Sept. 12, SIU Board of Trustees Chair J. Phil Gilbert said the goal is to appoint a Carbondale chancellor in about six months.

“This is a great campus that deserves a permanent chancellor to guide it into the future,” Dunn said in the release. “We’ll continue to move forward until the next chancellor is appointed.”

Newlin announced the reinstatement of the Resident Assistant Task Force, which will be run by Executive Vice President Phynix Huhn-Simmons.

The task force started last January and in an article from May 22 by the Daily Egyptian, Newlin said a big part of what the task force did was reach out to RAs and Academic Peer Advisors to understand what they wanted USG to advocate for.

The force was also concerned with how these groups felt about their jobs and what changes they wanted beyond just being able to hold a second job, Newlin said.

Staff Reporter Keaton Yates can be reached at [email protected] or on Twitter @keatsians.