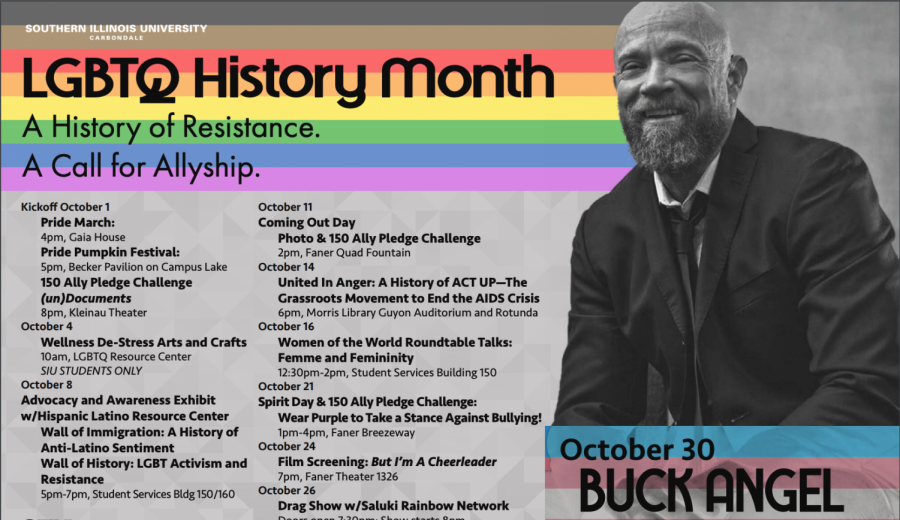 SIU students and community members assembled at the Gaia House on Tuesday to celebrate the community and kick start LGBTQ history month.

“We are here to make ourselves visible on campus,” Victor Arévalo, a senior studying political science and the president of Saluki Rainbow Network, said. “We are here to make sure everyone knows that we’re here, we’re queer, and it is our history month.”

The march ended at Becker Pavilion, where a celebration began the month with Pride Pumpkins that were painted in all colors of the rainbow and s’mores were provided by Oasis, a faith-based LGBTQ affirming group.

Vernon Cooper, the LGBTQ Resource Center Coordinator, gave a speech at the event about the subject of allyship.

“I have expectations for the LGBTQ Community that we are also allies,” Cooper said. “We are allies to other marginalized groups. There are groups right now whose social position and literal safety in the country is under threat.”

Cooper said what he considered to be “the famed gay agenda” is that it involves a lot of hairspray.

“The gay agenda is trying to increase the likelihood that people are going to be treated with the respect and fairness that they deserve,” Cooper said. “The goal of my position is to both help students create a community […] and help promote the likelihood that other folks will be allies to those students.”

Cooper said allies are a source of hope for the LGBTQ community.

The march was the first event on SIU’s history month calendar and over the course of the year, Cooper said he has set a goal of having more than 150 individuals sign an “Ally Pledge.”

This pledge can be signed by anyone who supports the LGBTQ Community and its members, Cooper said.

Two of the more notable events that will occur later in the month include a “Midsummers Nights Dream” themed drag show with the Saluki Rainbow Network on Oct. 26 and a visit and event with celebrity Buck Angel on Oct. 30.

Both the community and those who support them can attend the events.

Staff reporter Juniper Oxford can be reached at [email protected]