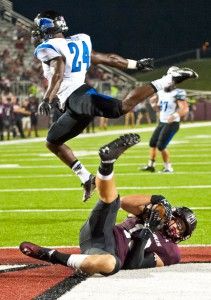 The SIU Football Team played host to Eastern Illinois Saturday in its home opener and fell against its intrastate foe 40-37 in a game for the ages.

The two teams combined to miss five field goals, but Eastern Illinois hit its most important one in double overtime to give the Panthers the nail-biting victory.

With a crowd of more than 10,000 at Saluki Stadium, the matchup gave the fans everything they could ask for—a lot of offense and a lot of suspense.

After the two teams shared touchdowns in the first overtime to tie the game at 37, the Salukis were forced to try a field goal in the second overtime to regain the lead. Junior place kicker Thomas Kinney missed a 37-yard field goal attempt, his third failed attempt of the night.

The Panthers regained possession, and, after failing three times to make it into the end zone, EIU place kicker Cameron Berra kicked the game winner from 36 yards.

Senior linebacker Bryan Presume had one word to describe the feeling after the Salukis came up just short of a victory.

“Heartbreaking,” Presume said. “All of the guys put their hearts into the game, and we just fought to the end, but we couldn’t get it done.”

After SIU scored a touchdown in the first overtime, Coach Dale Lennon said he considered going for the two-point conversion with a fake extra-point attempt to give the Salukis the win, but reconsidered.

“I had a call, and then I called a timeout,” Lennon said. “I thought too much about it. Maybe I should have went with my gut instinct, but that’s hindsight. I wanted to give our team a chance. That was the thing I was trying to figure more than anything.”

The Salukis then settled for the extra point to tie the game.

Down 30-23 with 3:40 left in the game, the Salukis drove the field and on fourth down with the game at stake, senior quarterback Kory Faulkner threw to senior wide receiver John Lantz, who slid into the end zone for the 17-yard Saluki touchdown to tie the game.

With 2:13 on the clock, the Panthers started their drive on their 11-yard line and drove down the field to set up a potential game-winning 20-yard field goal with 0:02 left in the game.

With Saluki fans gritting their teeth, Berra stepped into the kick and junior linebacker Tyler Williamson blocked the attempt, sending the game into overtime.

“The (blocked field goal) allowed us to stay alive,” Lennon said. “We talked defensively about fight, bite, scratch, claw or do whatever you have to do to make a play. You can’t fault the effort.

EIU quarterback Jimmy Garoppolo threw for 440 yards and four touchdowns. Three of his touchdowns came in the first half en route to the Panthers 21-10 halftime lead.

Presume said it was difficult playing against the Panthers’ no-huddle offense.

“It’s a struggle keeping up with their offense,” Presume said. “They are so up-tempo, the chains weren’t even set sometime when they were running the next play. We did better than most teams usually do against them. We just didn’t do enough to get the W.”

Faulkner completed 28 out of 50 passes for 294 yards and four touchdowns. This was Faulkner’s second consecutive game throwing for at least 250 yards and three touchdowns.

Despite Faulkner’s individual performance, he said he didn’t do enough for his team to win.

“I have to play better if we’re going to win,” Faulkner said. “It’s on me as the leader, the captain, and the quarterback of this team. I have to elevate my play or else maybe we’ll just keep coming up short every time and that’s not what I’m about.”  Despite the intensity, Lennon said he isn’t concerned about how exciting the game was.

“I’m mad!” Lennon said. “I’m upset we lost the ball game. We had a chance to win. This is nothing about a feel-good loss. It has nothing to do with what it ranks up with anything—I’m not happy about it.”

Although the game was dominated by both team’s offenses, EIU coach Dino Babers praised the Saluki defense.

“They are very, very good in the defensive line,” Babers said. “It was a physical game. This is a good football team. We’ll probably see them in the playoffs.”

The Salukis will remain home and face Division II University of Charleston Saturday at Saluki Stadium.