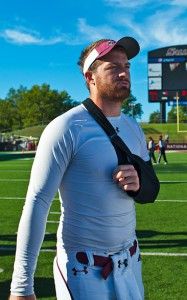 The Salukis came away with a convincing win Saturday at Saluki Stadium, but may have lost something that will play a major role in games to come—their starting quarterback.

Senior quarterback Kory Faulkner went down with a left shoulder injury after scrambling late in the second quarter in a 31- 10 victory against the University of Charleston.

Faulkner did not appear to take a hard hit when he was tackled, but laid on the field for several minutes before sitting up. He then walked off the field with Assistant Athletic Director Lee Land, who also serves as SIU Football’s head athletic trainer, holding his shoulder.

Faulkner was taken for X-rays to determine the severity of the injury and did not return to the game. He was later seen walking on the sidelines with his arm in a sling.

Fortunately for the Salukis, coach Dale Lennon said the injury didn’t appear to be season-ending.

“Nothing’s broke,” Lennon said. “That’s the positive. Now it’s just kind of how fast he can heal and that’s all guessing and speculating, so we’ll wait and see how he’s doing on Tuesday or Wednesday.”

As for Saturday’s Southeast Missouri State game, Lennon said he doubts if Faulkner will be ready.

“I’d be surprised if he played this upcoming Saturday,” Lennon said. “It’s too early. He may feel great (Sunday); he might be very sore (Sunday) so you just never know until the next couple of days.

Before the injury, Faulkner had another impressive outing. He completed 10 of 14 passes for 143 yards and a touchdown. With this injury, Faulkner is in danger of not starting at quarterback for the first time in the Salukis’ last 21 games.

Freshman quarterback Ryan West replaced Faulkner and made his presence felt after completing his first three passes of the game, including a 22-yard touchdown to junior wide receiver LaSteven McKinney. The leaping catch gave the Salukis a 21-3 lead at halftime.

West, who redshirted during the 2012 season, said he prepares every week as if he can be called on to enter the game at any time.

“Coach always tells me during the week that I’m one play away, and I always have to watch film like I am the starter,” West said. “That was a huge confidence boost for me. Just knowing that I can come in and produce good numbers if Kory (Faulkner) goes down was huge for me today.”

Lennon said he was relieved after West threw his first touchdown pass in his first career appearance for the Salukis.

“You always worry when you have your No. 1 quarterback go down and you have a freshman that has to come in and perform,” Lennon said. “He starts off and completed his first three passes so that’s encouraging.”

West finished the game completing five of 10 passes with one touchdown and an interception.

West said he would be prepared to start Saturday if Faulkner can’t play.

“This game was a huge confidence boost for me, and if Kory (Faulkner) can’t go, I want to be the guy who comes in and gets that win Saturday,” West said.

As for the win against Charleston, the Salukis were sloppy at times, totaling six fumbles. However, the defense held the Golden Eagles to 172 yards of total offense, which proved to be enough to give the Salukis their first win of the season.

Junior running back Malcolm Agnew ran for 98 yards on 14 carries.

He said although the team didn’t play as well as they would have liked, he is still happy the team could come away with the win.

“A win is a win,” Agnew said. “It may have not been the prettiest win or the win we wanted to get but a win is a win and we can build off that and keep getting better as the season goes on.”

Lennon said he saw room for improvement after his team turned the ball over three times in the fourth quarter.

“I think we let our guard down,” Lennon said. “And in football when you do that, you leave yourself open to strange occurrences. We didn’t make it an easy game for us.”

The Salukis also played in front of some of the best players and coaches in the history of the program Saturday.

Saluki Football honored its All-Century team during halftime of the game. A total of 26 members of the All-Century team were in attendance with six others represented by friends, family or former teammates.

Freshman linebacker Carl Bivens said he was inspired by the postgame speech given by All-Century coach Rey Dempsey, who led the Salukis to their only national championship in 1983.

“(Dempsey) said some things that really spoke to me a little bit,” Bivens said. “He talked about how we have to envision ourselves winning, and I feel like that’s what we need to do as a team, because we are right there.”

The Salukis will head to St. Louis Saturday in a non-conference matchup against Southeast Missouri State. It will be the first-ever football game at Busch Stadium, with kickoff set for 1 p.m.