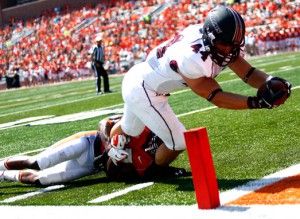 The SIU Football Team went into Champaign’s Memorial Stadium on a scorching hot Saturday, and nearly came away with an upset victory but fell just short as they lost to the Fighting Illini 42-34.

The temperature hit 95 degrees, with a heat index of 108 degrees, and players were seen removing themselves from the game with heat exhaustion. That didn’t stop Illini senior quarterback Nathan Scheelhasse from throwing for a career-high 416 yards; including a school record 340 yards in the first half.

Despite Scheelhasse’s Big Ten Offensive Player of the Week performance, the Salukis showed they were down, but never out. After being down 25-7 at halftime and facing a 39-17 deficit late in the third quarter; SIU outscored the Illini 17-3 in the final 20 minutes of the game to cut Illinois’ lead to eight causing Illini fans to grit their teeth hoping to avoid a 10th consecutive loss.

Trailing by eight points with three minutes left to play, senior quarterback Kory Faulkner drove the Salukis down the field for a first-and-goal at the 9-yard line. After three plays of failing to get into the end zone for a potential game-tying score, the Salukis faced a fourth-and-goal on the 3-yard line with 44 seconds left in the game. With Illinois on the ropes, Faulkner’s fourth down pass attempt sailed just out of the reach of sophomore tight end Adam Fuehne, allowing the Illini to take possession and run out the clock.

Despite the loss, Coach Dale Lennon said he liked the way his offense never gave up and fought until the end.

“I was very pleased with the way we battled back,” Lennon said. “We showed a toughness on offense that every coach wants to see.”

Faulkner said SIU was in the right position to score and potentially send the game into overtime, but the last play just didn’t work out in their favor.

“Coach (Kalen) DeBoer made a good call (on the final offensive play),” Faulkner said. “We put ourselves in the situation, and it was all we could really ask for. We battled and got the opportunity, but obviously we didn’t complete it so I wish I had it back.”

The Salukis’ first big play of the game came from a 39-yard pass to senior wide receiver John Lantz who dove into the end zone for what looked like the Salukis’ first touchdown of the season. The play was later reviewed and it was determined Lantz was downed at the 1-yard line. The next play, junior running back Mika’il McCall ran it in for the score, which gave the Salukis an early 7-3 lead.

The Salukis carried that lead into the second quarter until Scheelhaase completed a screen pass to sophomore running back Josh Ferguson who ran 53 yards for the Illinois touchdown, giving the Illini the 10-7 advantage.

On the Salukis’ next possession, McCall was given a handoff up the middle and ran for 2 yards before fumbling and giving the ball back to Illinois on the Saluki 30-yard line.

The Illini capitalized on SIU’s mistake by scoring a touchdown after two plays and 23 seconds to increase their lead to 17-7.

Illinois scored again on a 7 play touchdown drive with 17 seconds left to go in the first half and took a 25-7 advantage into halftime after also converting the 2-point conversion.

With an 18-point lead in the third quarter, Scheelhaase made his first mistake of the game when sophomore safety D.J. Cameron intercepted Scheelhasse’s pass and returned it to the Illinois 8-yard line.

The Illini followed with a touchdown, and SIU responded with a field goal to make the score 32-17, Illinois defensive back V’Angelo Bentley returned SIU’s kick 100 yards for the score, tying the Illinois school record for longest kick-off return for a touchdown.

After Illinois returned the kick for a touchdown with just over five minutes left in the third quarter to increase their lead to 39-17, fans were seen leaving the stadium.

Faulkner said despite Illinois’ big lead, the Salukis’ still believed they could get back in the game.

“We never even thought about giving up the whole time we were out there,” Faulkner said. “Maybe the Illinois fans thought it was over when they returned that kick, but we knew we just had to go out there and put points on the board, and that’s what we did.”

Faulkner’s words proved to be right as the Salukis outscored the Illini by 14 points to crawl back into the game and Saluki fans chanted “SIU” throughout the stadium to motivate the team to finish the comeback.

On SIU’s next possession, Faulkner connected with Lantz for a 35-yard touchdown pass to cut the deficit to 39-24. The catch was Lantz first career touchdown reception.

After the Illini and the Salukis traded field goals to make the score 42-27, senior linebacker Tyler Williamson forced an Illini fumble and a Saluki recovery. The following possession, Faulkner threw a touchdown to junior tight end MyCole Pruitt, who dove in the back of the end zone for the acrobatic catch to cut the lead to 42-24.

With 44 seconds to go, the Salukis had one final chance to tie the game and send it into overtime but fell just short with fourth-and-goal on the 3-yard line.

“Our guys never gave up and found a way to get it down to one score at the end,” Lennon said. “We just came up three yards short.”

The Salukis will face No. 23 Eastern Illinois, Saturday at 6 p.m. in their home opener.