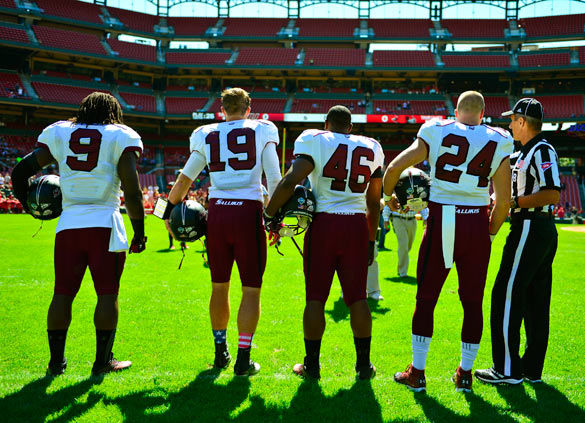 The Salukis came out of their non-conference schedule with a modest 2-2 record with agonizing defeats against Illinois and Eastern Illinois and impressive wins over the University of Charleston and Southeast Missouri State.

In the first four games, SIU competed with teams that posed a threat, and proved to run over teams that shouldn’t be in sniffing distance of a win.

The Salukis showed what they are capable of, and now the real season begins.

As senior quarterback Kory Faulkner said after defeating SEMO Saturday in St. Louis, it’s no secret, the Salukis play in arguably the best conference in the Football Championship Subdivision.

On Saturday, the Salukis will start their journey toward winning the Missouri Valley Football Conference for the first time since 2009.

Coach Dale Lennon said his team members found themselves after playing out the non-conference schedule.

“We now have a pretty good understanding of who we are and what we would like to do when Saturday comes,” Lennon said. “The previous four games have served us well, but I wish we were better than 2-2. However, there are still eight games in front of us.”

The journey won’t be easy, as the Salukis’ first three conference opponents have a combined 9-2 record with the only losses coming against Big Ten opponents Nebraska and Michigan State.

After SIU weathers that storm, they will have to face back-to-back national champion North Dakota State for homecoming. The Bison own a 31-2 record since 2010 and have won the MVFC the past two years.

But first, the Salukis will have to get through Youngstown State on Saturday.

The Penguins return with an experienced quarterback and have a rotation of running backs. Their defense lost a core of starters from the 2012 team, but brought back the bulk of their linebackers and most of their secondary.

“They’re very talented,” Lennon said. “They’re a little bit like us, and they are a balanced team.”

As is every season, the MVFC will be a dogfight and I doubt anyone will make it out unscathed.

The Salukis will suffer their fair share of losses, but what matters is how the Salukis bounce back each week.

This year’s team members recall how close they were to returning to the playoffs last season and wants to finish what the 2012 team could not.

However it is not that the Salukis need any added motivation for Saturday’s game. The Salukis should see a bigger crowd against Youngstown State because of the significance of the weekend.

Saturday’s matchup against Youngstown State comes on Family Weekend and is also the third-annual Saluki Black Out Cancer game.

Lennon said the game is a huge moment to raise money for a great cause.

“It’s a great opportunity to be involved with, and it’s a worthwhile fundraising activity to be a part of while giving back to the community, especially now with this being a pretty significant game,” Lennon said.

Lennon said the game was moved earlier in the season to better the attendance.

“The previous two years, we have had this game at the end of the season, and the attendance wasn’t what we had really hoped for,” Lennon said. We hope that we can benefit from an early-season game, the conference opener, and to really have an opportunity to raise some money for a worthwhile cause.”