An unconventional event: Saluki Con brings campus and community together 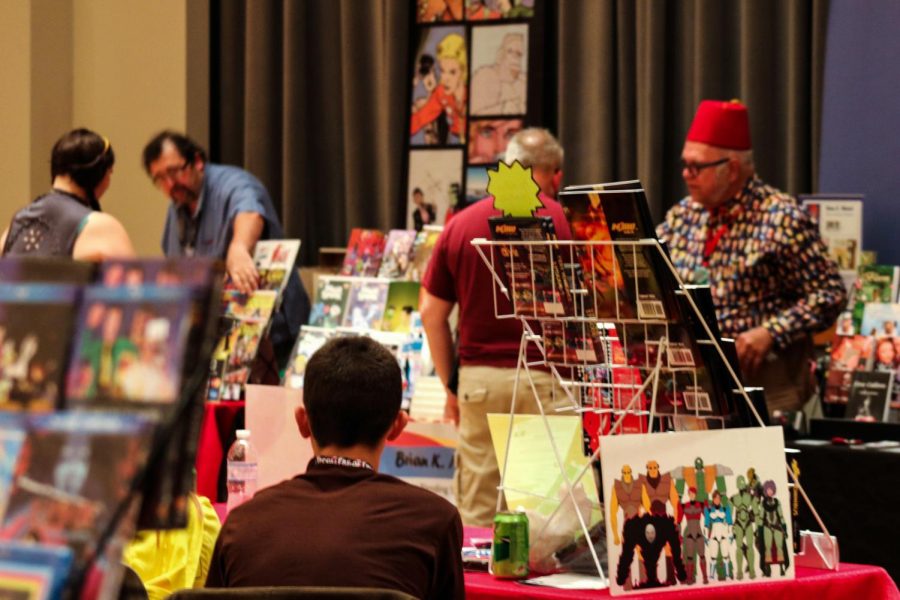 Attendees walk through the rows of booths on Saturday, Sept 28, 2019 during SalukiCon.

The 2019 Saluki Con took over the SIU Student Center on Sept. 28 and 29. Students, faculty and community members attended the annual convention for everything gaming, cosplay, artistry, pop culture and comic related.

The main attraction was in the Student Center ballrooms where rows of tables with local and non-local artists and vendors could show off their products.

Nearly everything related to nerd culture was on display. Local card shops selling games and a variety of dice; authors signing copies of their latest books; artists doing sketches on the spot for attendees and designers selling cosplay items.

One of the vendors, Brad Moore, a Carbondale resident and graduate of SIU, creates artwork for record companies and death metal/doom metal bands.

Moore said there are many ways he can get his art used by bands. He said they either come to him with a specific idea, ask him to make whatever he believes is best for the album, or Moore will pitch a piece of artwork to the band.

“As you can tell, it’s all macabre,” Moore said. “I considered it surrealism more than horror, but surrealism has a morbidity to it anyways.”

Moore said he has been coming to Saluki Con since 2016 and attended the Eclipse Con.

Two vendors and artists that aren’t from the area were Cullen Bunn and Jimmy “JimmyZ” Johnston.

JimmyZ and Bunn have co-authored comics like “Micronauts” and “The Tick.”

JimmyZ has been collecting comic books since 1986 and now owns a comic book shop in Cuba, Missouri, called Little Shop of Comics. He said he became a guest at Saluki Con because of his children.

“My daughter and oldest boy started going here about September of 2018,” JimmyZ said. “This convention was coming up, and my daughter asked me if I would be interested in being a guest.”

Along with JimmyZ was Cullen Bunn, a long time friend of JimmyZ and a full-time comic writer.

Bunn said he has been writing comics professionally for 15 years. He said he’s written for nearly every publisher including Marvel, DC, Dark Horse and Archie.

Bunn has written extensively about Deadpool. One of his earliest works for Marvel was “Deadpool Kills the Marvel Universe.”

Bunn said he draws his inspiration from everyday things and from the media he consumes.

“I’m pretty much drawing inspiration at all times,” Bunn said, “Just today talking to someone at the table we stumbled onto some little line of conversation and I was like, ‘oh, that’s interesting.’”

When writing Deadpool, Bunn said you always have to keep in mind that he kills people for a living and there’s a lot of darkness inside of him. Bunn said his version of Deadpool is a little darker than others.

When Marvel asked Bunn what he would do with a story called “Deadpool Kills the Marvel Universe,” he said he would make a Deadpool like Freddy Krueger and Jason Voorhees.

“I don’t want him to be goofy, I want to do a very dark take, a comedic Deadpool, but very dark,” Bunn said.

Saluki Con also featured special guests from popular TV shows and movies like actor Adrain Paul from “Arrow” and “Highlander: The Series” and Tracee Lee Cocco, an actress and stunt woman from the “Star Trek: The Next Generation” movies and TV series.

Another special guest was David J. Peterson. He is a language creator and is responsible for creating the Dothraki and High Valyrian languages in “Game of Thrones” and Trigedasleng from the TV show “The 100.”

Peterson said this was his first Saluki Con and he was invited by SIU linguist professor Jeff Punske.

Peterson said he doesn’t have a lot of people come up to him speaking Dothraki, but he is surprised by a dedicated fan group that speaks the language from “The 100.”

“The language I created, Trigedasleng, that has an actual, dedicated fanbase,” Peterson said. “People learn the language and use it, so that was really cool.”

“You’re not creating the entire language at once, you’re creating little bits at a time; spend an hour or two a day create a little bit,” Peterson said.

“When it comes to the system, the grammar, it’s not really anything like a novel. It’s much more like an engineer, because it’s a system that needs to work,” Peterson said. “It doesn’t need to work perfectly because human languages aren’t perfect, the way that a computer program is, but it still has those elements to it.”

The convention made use of SIU’s new Esports arena with multiple tournaments throughout the weekend. “Dance Dance Revolution,” “Hearthstone” and “League of Legends” were all played on Saturday, while “Super Smash Bros. Ultimate” and “Counterstrike: Global Offensive” were played on Sunday. River Radio’s Nora Inman streamed the tournaments on Twitch.