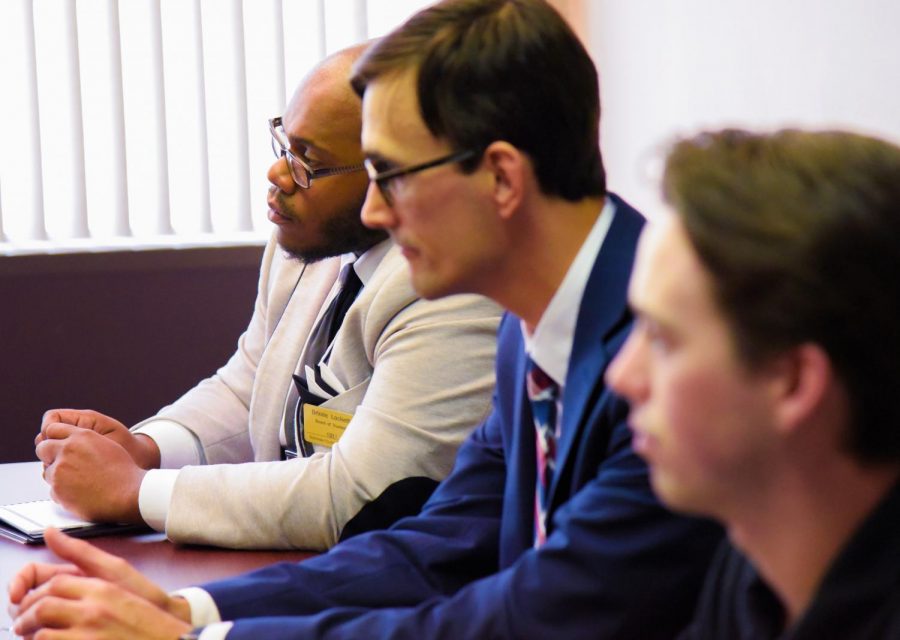 Brione Lockett leads the conversation on Wednesday, Sept. 25, 2019 during a campus conversations meeting in the Kaskaskia room in SIU’s Student Center.

Campus Conversations started up for the first time this semester with a panel discussion around the theme of “building the best SIUC.”

On-campus segregation in the dorms, the $200 bursar rule and how the administration listens to student voices were the topics of major concern at the meeting.

“We really don’t get opportunities as students, to give feedback, or provide information on what’s going on in our departments or our lifestyles here on campus,” Lockett said. “So coming up with this first [Campus Conversations] for this semester was to bring all student governing bodies together to listen.”

The first concern brought up at the meeting was whether or not the university is truly student focused.

“Recently I logged into brightspace in D2L and noticed that the university’s mission statement had been posted,” Jeremy Allen, a graduate doctoral student studying sociology, said. “I find it interesting that it’s not until the 23rd word that the word student appears in a university that is suffering from declining enrollment.”

Allen said he recognizes the university is not here to only serve students but he expected the word ‘student’ to appear before the 23rd word in the mission statement.

“What is the university’s primary purpose?” Allen said. “If it’s not to serve students then why are we surprised that we have a decline in enrollment?”

Allen said the $200 bursar rule, which prevents students from enrolling in classes if they have a bill above $200, is an unnecessary barrier to students.

“The idea that if you have a $200 balance you cannot register for classes, when they know that you are going to qualify for $26,000 in student aid in two weeks, is utterly ridiculous,” Allen said. “You are going to get your money, but not if you don’t let me enroll.”

Newlin responded to this concern and said USG is working on it.

“Our chief of staff, Jordan Hughes, is currently in talks with the financial aid department and other bodies to raise that from $200 to $500,” Newlin said. “As a way to kind of bridge that gap between that balance.”

Newlin said the university’s concern with raising the limit is fear that students won’t pay off the debt when they graduate.

“The bigger the number is, the more they are going to get nervous because they think students are going to graduate with this little bit of debt, they get their degree because it’s under the limit and they never pay it back,” Newlin said. “That’s the concern I’ve heard from that argument.”

Dianah McGreehan, vice president of Graduate School Affairs, spoke at the meeting and asked if racial segregation in the dorms was an issue on campus, based on concerns she heard from students.

“When I got to Neely Hall, it was a mixture of some people but it was mostly black people in Neely Hall and Mae Smith,” Wilkins said. “Thompson Point was white kids and affluent.”

Lockett said this segregation was around when he was an undergraduate at the university. He said when he lived in the dorms, the Thompson Point area was referred to as the “Suburbs” and the area where the towers and triads were was referred to as “vertical Africa.”

McGreehan said this segregation becomes part of SIU’s narrative and affects how the university recruits.

“There is a tension here as students are looking to become a Saluki or considering that,” McGreehan said. “I’m kind of curious what other things are hidden that might not be as openly spoken about.”

The meeting ended with Lockett, Awsumb and Newlin sharing their plans for the semester.

Newlin said he met with the USG executive board yesterday to decide what they wanted to accomplish on campus this semester and said they are in discussions to see if they have the resources to offer scholarships.

Newlin said USG was also going to take on the plus or minus grading scale at the university.

GPSC would continue to provide support to the campus through their typical programs and they plan to continue to do their research awards, graduate teacher awards and service awards, Awsumb said.

Awsumb said the group plans to focus on implementation gaps at the university throughout the semester.

“We have to stop being afraid of talking about the things that we are going to improve,” Awsumb said.

There has been hesitancy or fear, Awsumb said, to talk about things that need to be improved.

News Editor Kallie Cox can be reached at [email protected]