A heart second to none: Perseverance is the magic word for quarterback Karé Lyles 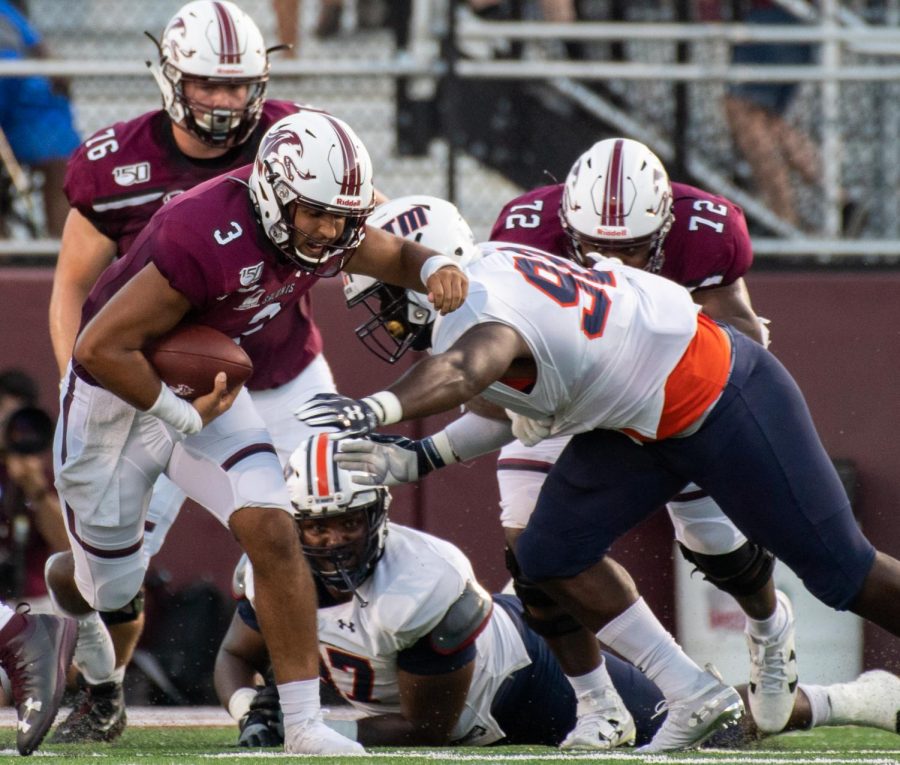 Saluki junior Karé Lyles protects the ball on Saturday, Sept. 14, 2019 at SIU Arena during the Salukis' 28-14 win against the Tennessee-Martin Skyhawks.

Much of Saluki nation may not recognize the name Karé Lyles, but after this Saturday’s football game at Arkansas State, they are sure to.

At the beginning of SIU’s football season, sophomore Stone Labanowitz emerged as the team’s starting quarterback, but in last Saturday’s game he suffered a shoulder injury in the first half that will keep him out of action for four to six weeks.

As a result, junior transfer quarterback Karé Lyles saw his first game in action as he replaced Labanowitz for the remainder of the game. During his time on the field against UT Martin, Lyles completed 10-of-12 passes for 92 yards.

Lyles hails from Madison, Wisconsin, but his family moved to Scottsdale, Arizona, when he reached eighth grade as his parents received job opportunities in the area.

He started playing football at a young age and was taught by his father.

While he started playing early on in his life, Lyles did not always play in the quarterback position.

“I first started playing in third grade,” Lyles said. “It’s funny because I played defensive end and offensive guard pretty much leading all the way up to my eighth grade year. I made the weight limit in eighth grade, and my dad asked if I wanted to play quarterback, so I made the switch.”

Lyles stuck with the quarterback position after being introduced to it, and he continued to excel as he got older.

In high school, he was an ESPN three-star prospect and ranked as the number 43 pro-style quarterback in the nation by 247Sports. He also led his team to back-to-back state championships during his junior and senior years. During his senior year, he passed for 3,561 yards and 47 touchdowns with a 70% completion average.

Football seems to run in Lyles’ blood as his father also played the sport collegiately for the University of Wisconsin.

Lyles decided to transfer to Scottsdale Community College in Arizona after spending two years at Wisconsin and the now junior described his experience in junior college as a stressful time, but a valuable learning experience.

“I think the junior college experience is very unique,” Lyles said. “I went from getting scholarship money and cost of attendance checks to getting none of that at junior college. I had to get a job, find my own food and housing, and make sure I got my degree while focusing on football and being in the recruiting process. It was a very stressful time, and there were plenty of dark moments, but I look back and I realized that it was a great experience for me to have.”

After playing last season at Scottsdale CC, Lyles committed to SIU and became a Saluki.

The Wisconsin native said that a major factor in his commitment to Southern was the community aspect of the university.

“I love the community here,” Lyles said. “It’s such a tight knit community, and it’s really unique. The small town feel definitely brings out the family atmosphere. It definitely reminds me of back home, but at the same time it’s very new to me.”

Amongst his fellow players and coaches, Lyles is known as someone who is dedicated to the game and bettering his abilities to help contribute to the team.

Saluki quarterback coach Blake Rolan described Lyles as someone who brings experience and a great attitude and work ethic to the team.

“I think that he brings a great deal of experience to the team,” Rolan said. “In terms of preparation, he comes into practice everyday with a great attitude to learn and he really dives in. He’s always around the office, and he’s always watching film. He eats it up and lives and breathes the game.”

“His arm, his accuracy, and his overall knowledge of the game makes him a good quarterback,” Sullivan said. “He’s very smart, which all of our quarterbacks are, but I think he excels over the rest because he’s older, and he understands the game a lot more. He brings the knowledge and experience we’ve been needing in the quarterback position.”

Rolan said he feels Lyles fits well into the leadership role the position requires of him.

“I think a lot of the hard work he does makes him a good quarterback,” Rolan said. “The job as a quarterback requires you to lead and bring people along with you. He brings the right attitude every day to practice and he understands the responsibility. He studies it and improves every day. He takes care of his body, and this pushes the other quarterbacks to do the same.”

This leadership aspect of playing quarterback is what Lyles said is one of his favorite things about playing the position.

“My favorite thing about the position is taking ownership in leading and harnessing the details to make sure you’re prepared to the best of your ability,” Lyles said. “I like to play for the guys next to me and when you know that you have ten guys that are willing to put in the grunt work for you, it’s the best feeling in the world.”

Even after facing adversity when he was moved into the back-up position, Sullivan said Lyles remained positive, and he praised him for this.

“He has a relentless work ethic that contributes a lot to his improvement on the field,” Sullivan said. “When he initially lost the starting job, he never quit. Most people would give up and settle into that back-up role, but he didn’t. His best quality is that he always has a smile on his face and keeps a positive attitude.”

Lyles said he attributes his work ethic to his early years playing basketball and the old film his father would show him growing up.

“I loved playing basketball growing up,” Lyles said. “I really learned about giving 100% effort from basketball. My dad would put on Dennis Rodman film and told me to be an effort guy like him. So, I was taught just to play with a lot of high intensity in everything I do and it brought out the best in me.”

Lyles said another major influence on his current work ethic was one of his old high school teammates.

“Christian Kirk has had a huge impact on me as a player,” Lyles said. “He is a wide receiver that is currently playing for the Arizona Cardinals. The way he would prepare himself and his work ethic is unmatched. He is a big brother to me, and I have learned so much from him. I think I try to model my work ethic and my attitude after him.”

With Labanowitz in recovery, Lyles was announced as the new starting quarterback, and Saturday, Sept. 21,  was the junior’s first start of the season, but he said he felt prepared to take on the responsibility.

“Perseverance has always been a big part of my life,” Lyles said. “The game is going to stay the same, but I‘m just going to be watching it from a different seat this time. I can say that I go into each and every single day with a purpose, and I want to make sure I gain the trust of the guys out there. The battle is won with the guys who prepare the most and who executes the best.”

Lyles’s teammates have no qualms about him stepping into the starting position again and Sullivan said he has faith in the junior quarterback.

“We all believed in him when he got in the game last Saturday,” Sullivan said. “We had no doubts in him. We knew exactly what he would do, and how he would react. I like his moxie and his go-get-it personality. He has this will to win. Whether it’s going to be a dirty win or a clean win, he’s going to get the job done.”

As far as goals for this season, Lyles just wants to help his team earn wins on the field.

“My goal for this season is just to win,” Lyles said. “I want to do whatever it takes to win because these guys on the team have earned the winning feeling. Getting to work with these guys, I’ve seen how many special people there are and you can see how bad they want it. That truly makes you want to play for the guy next to you, and that’s why I’m doing everything in my power to make sure I’m ready so when we leave the field on Saturday we’ll have a W.”

In his first start at quarterback, Lyles completed 19 of his 33 passing attempts putting up 288 yards along with one interception in Southern’s 41-28 loss to Arkansas State.

You can see Lyles and the Saluki football team return to the field on Oct. 5 in Brookings, South Dakota, where they will face-off against the South Dakota State Jackrabbits. Kick-off is set for 2 p.m.