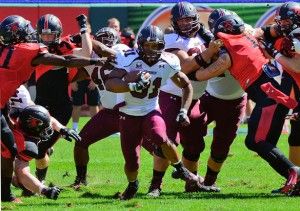 Some 14,000 fans witnessed the first football game at Busch Stadium Saturday as a Saluki running back rushed for more than 100 yards for the first time since 2011.

Of Agnew’s 127 rushing yards, 104 came in the second half against the Redhawks. Agnew’s 127-yard performance broke a streak of 14 consecutive games without a 100- yard rusher for the Salukis.

Coach Dale Lennon said he was happy to see the streak finally end.

“We’ve been talking about the running game all year long, so it was good to see it in full force today,” Lennon said. “Malcolm (Agnew) just had a good feel for it. He did a great job cutting on the field, and running the football seemed to come to him fairly easy. For us, it was an easy decision to keep feeding him.”

Lennon said he was impressed with the second-half performance his team displayed against SEMO.

“The guys had a very good second half,” he said. “We were very focused both offensively and defensively and that was very good to see, especially in the fourth quarter, where in the past we’ve let teams come back and make a game out of it.”

Senior linebacker Bryan Presume was named Missouri Valley Football Conference’s Defensive Player of the Week with his performance. Presume led the team with nine tackles—seven solo—and sealed the win with an interception on SEMO’s last possession of the game.

Presume said it was nice to see the defense get after the Redhawks.

“We made some plays out there today,” Presume said. “We had a few turnovers, a few sacks and that’s how we play defense. It’s good to finally get out here and play the style we actually play.”

The outfield grass at Busch Stadium seemed to play a factor as the game went on. Lumps of grass were seen coming up as multiple players left the game with injuries.

Junior tight end MyCole Pruitt said the team had to adjust to the field’s surface.

“It was sand-based and we usually play on turf,” Pruitt said. “It was a little slippery, and the field was coming up every time you tried to make a cut, but it’s all about being an athlete and being able to adjust to it, and I think we did that pretty well today.”

Multiple SIU players were recruited out of St. Louis and were given the chance to play in their hometown Saturday, including Pruitt, who said playing in his hometown was a great experience.

“I live about five minutes away from (Busch Stadium),” Pruitt said. “My whole family got to come out and see me play and it’s obviously a great place to play at and I enjoyed every minute of it.”

Lennon said playing on the big stage in St. Louis was important for both SIU and SEMO because of how heavily both programs recruit out of the area.

“We recruit a lot here,” Lennon said. “That’s why we got the number of St. Louis players on the team that we do, and we’ll continue to recruit here.”

There was speculation during the week that Faulkner would be unable to play Saturday after injuring his left shoulder against the University of Charleston. However, Faulkner got the start and threw his ninth and 10th touchdowns of the season.

“Kory practiced all Wednesday and Thursday,” Lennon said. “After Wednesday’s practice, we didn’t know if there would be any residue as far as being sore and not being able to do anything Thursday. When he came back Thursday and felt good, we knew then he was good to go.”

Faulkner said competitiveness and playing in his hometown factored into his decision to play.

“Being a competitor, being a senior and coming home to St. Louis to be able to play in front of friends and family, and being able to be out there with my (teammates), we looked at this game as a must win,” Faulkner said. “I didn’t want to sit, (Lennon) didn’t want me to sit, so I just did whatever I had to do.”

Faulkner said evening their record to 2-2 was important for the Salukis heading into their first conference matchup Saturday.

“It’s no secret we play in one of the best conferences in the FCS,” Faulkner said. “We’re going to have a tough game every week, so any time you can get a win is huge.”

The Salukis will return home and face Youngstown State Saturday on Family Weekend in their first conference matchup of the season.