Lenoir: More than a leader 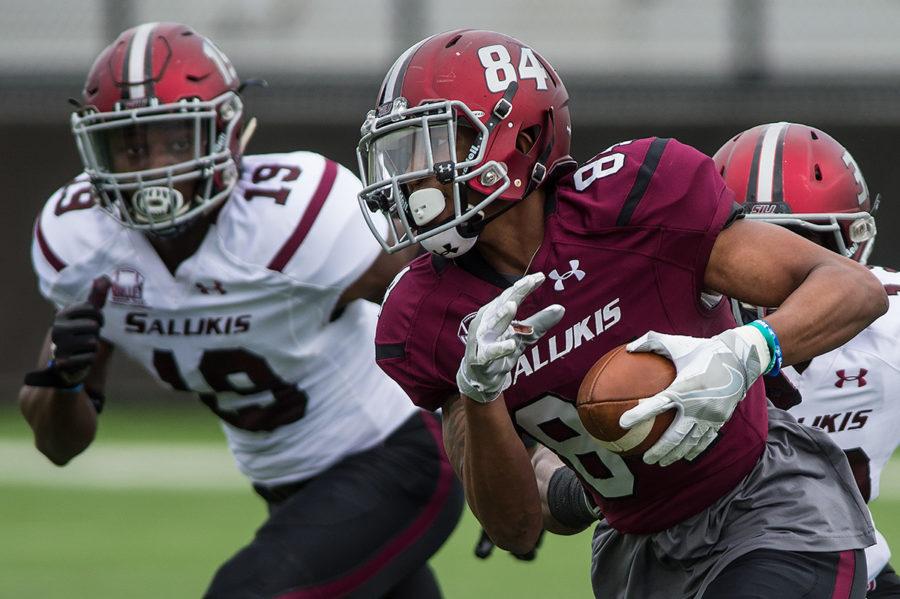 Junior wide receiver Landon Lenoir really means a lot to this Saluki team when it comes to leadership.

Lenoir is from Crete, IL. He is the second oldest of six with two brothers and one sister.

His 24-year-old brother played against him in the same conference when Lenoir was only a freshman.

Lenoir also has a cousin who is a wide receiver for the Minnesota Vikings.

There was a little bit of a family rivalry between him and his brother because they both played for the Missouri Valley Football Conference. His brother, Lance Lenoir, played at Western Illinois from 2013 through 2016, and signed on with the Dallas Cowboys in 2017.

“His senior year, when I was a freshman he actually came here to Southern to play,” Lenoir said. “That was our first time playing against each other, so I think that was considered a rivalry.”

In high school, having two NFL players that are related to him had a big influence on him.

“Me growing up in high school having Lance and Laquon both in my ear that played a big difference,” Lenoir said. “ Now we’re older and finding out our different ways, but they still help me for sure.”

Lenoir said wide receiver coach Nick Williams and coach Grier have had the biggest impact on him.

“Both of them are easy to talk to,” Lenoir said. “They give me great responses back and most importantly, they keep it honest with me. I’m very thankful for that.”

Williams said he admires the person Lenoir is. He really admires his attitude, and he loves the energy that he puts in day in and day out.

“He brings light to the room,” Williams said. “I love how great his attitude is. He comes to work every single day. He consistently inspires others, and he definitely makes a positive impact on the room every day. He’s a really good person.”

Williams said he likes that Lenoir is willing to listen to him.

“What motivates me is the fact that he takes my coaching advice,” Williams said. “His leadership and how mature he is at his age, he’s progressed every single year.”

Even in 2017, when Lenoir suffered a knee injury during his sophomore campaign where he was required to medical redshirt, Williams said he was impressed.

“He had a bad injury my first year here, which was his sophomore year,” Williams said. “He bounced back like nothing happened. He could have went a dark path, but he stuck with it.”

Williams said that he brings energy to practice along with an excellent attitude helping him become a better player.

“He loves to practice,” Williams said. “He loves the game of football every day. He comes out with a great attitude, and he comes with an aggressive attitude. He plays with a chip on his shoulder, so that definitely helps him become a great player.”

“He brings attitude and confidence” Cox said. “Every time he steps on the field, he knows he’s the best, and he’s going to get the ball.”

Zach Kramer, Sports Reporter, can be reached at [email protected]