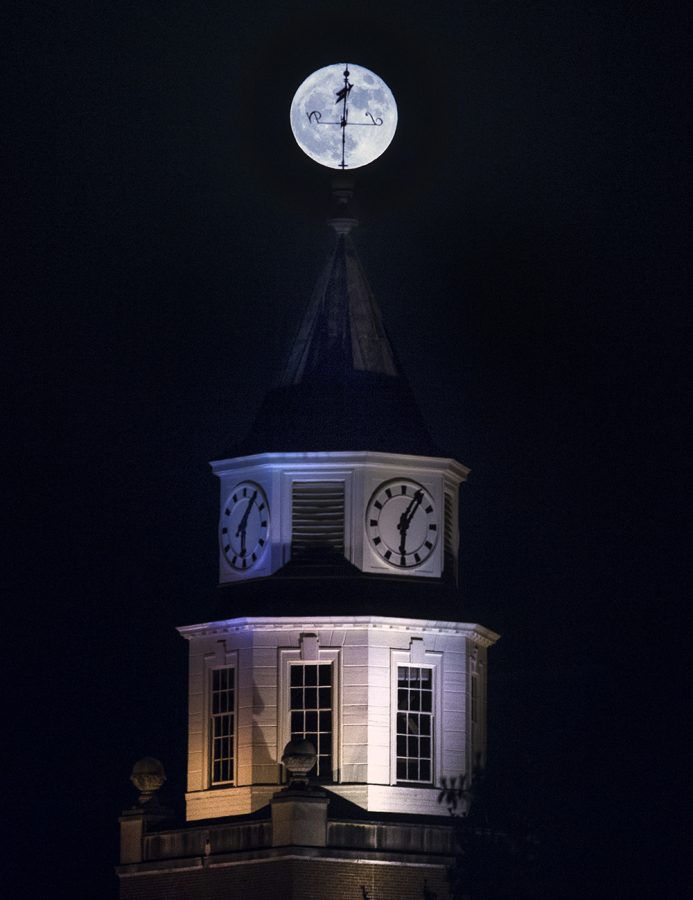 The Pulliam Hall clocktower weathervane sits silhouetted by the rising superman Monday, Nov. 14, 2016, in Carbondale. A perigee-syzygy, commonly dubbed as a “supermoon,” occurs when the moon becomes full on the same day as its perigee, the point in the moon’s orbit when it is closest to Earth. The 2016 supermoon appeared larger than at any other point in the last 68 years, and won’t appear this large again until 2034, according the NASA. (Ryan Michalesko | @photosbylesko)

By Brandi Courtois and Emily Cooper

“We’ve been up front, for several months now sharing with people that we anticipated [enrollment] being down,” interim chancellor John Dunn said at a Wednesday press conference. “Primarily related to the large graduation class not only in May but also in December.”

On-campus enrollment first dropped under 10,000 in the spring.

Enrollment on-campus looks at the amount of students who take classes on campus, while the overall looks at students enrolled on-campus, online and in remote locations.

SIU reached its peak enrollment in 1991 with almost 25,000 students. Since then enrollment has been on the decline.

Last fall, 10,698 students were enrolled on-campus, according to data retrieved from the SIU Registrar’s Office and provided by Jennifer DeHaemers, Associate Chancellor for Enrollment Management.

Both graduate and transfer student numbers remained relatively flat at 2,683 and 1,268 students respectively.

“The picture for first-time students and graduate students is significantly improved over the last two years,” Dunn said, “signalling that we are gaining traction and moving in the right direction.”

Freshman to sophomore retention has increased, according to the release, from 71% last year to 75% this year.

“Enrollment is as much about retaining students as it is about attracting new students,” Dunn said. “We are working hard at both.”

Dunn said the university is focusing on giving students hands-on experience and adding new programs in nursing and business analytics.

Other retention strategies include improving academic advisement, the First Saluki program for first-generation students and the implementation of an early warning system to identify struggling students, according to Dunn’s blog.

“Today, we are beginning to see some of these strategies pay off as we begin the lengthy process of turning enrollment around,” Dunn said.

This story is developing and will be updated as more information becomes available.