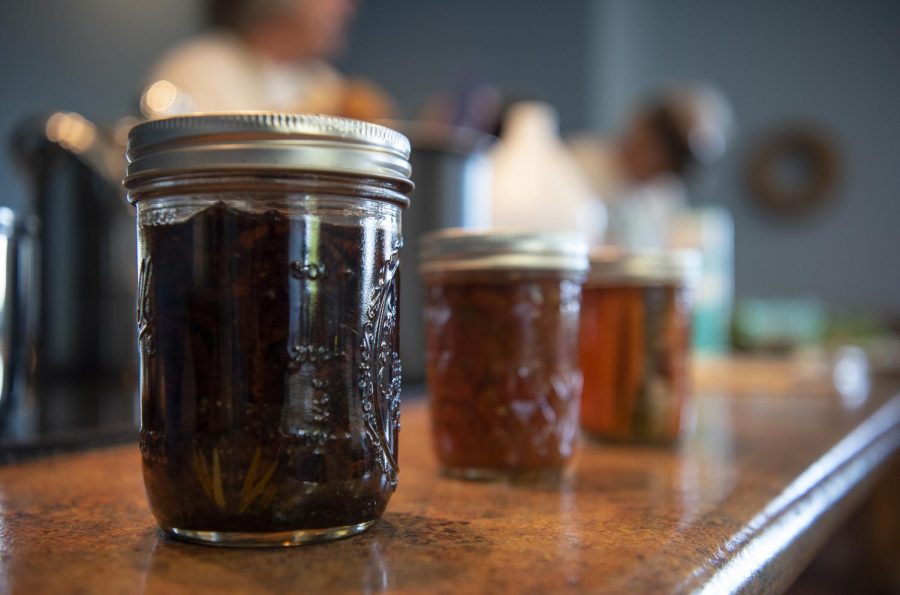 Ball jars filled with various vegetables and jams are put on display on Monday, Aug. 12, 2019, at an Intro To Canning demonstration at Kite Hill Vineyards in Etherton.

Turning green beans into dilly beans is much easier than you’d expect it to be.

Libby Ervin, the field coordinator for the southern Illinois farming alliance with Food Works, hosted an intro to canning demonstration at Kite Hill Vineyards to promote a sustainable food economy in southern Illinois

Canning is a method of preserving food in airtight containers that can be stored at room temperature, according to a post on Facebook from Kite Hill Vineyards.

“Food Works is a nonprofit here in Carbondale and it’s really dedicated to bringing a sustainable food economy to southern Illinois,” Ervin said. “So it’s working with farmers, people that are interested in farming [or] doing home gardens.”

This organization also does other “field days” similar to this one and they usually occur the second Monday of the month between March and October, Ervin said.

“So everybody that’s members of Food Works, we have an annual meeting in January and we usually have a theme discussion topic. Then we also vote on topics people are interested in for the field days,” Ervin said.

According to Ervin, they decided on a theme in January, which was preserving the harvest.

“Things come due all at once, you can’t really eat everything, or you can’t process it. So [we’re] looking at other ways to preserve your food so you have it year round,” Ervin said.

Intro to Canning was only one of the field days held this year by Food Works. The class was taught by Marjorie Sawicki, a registered dietician and retiree of St. Louis University. She demonstrated how to pickle green beans into dilly beans.

“[Canning] is a way of putting food by when it’s picked at the peak of ripeness,” Sawicki said.

“Usually you know where this [food] is coming from, either you’re making it or getting it from somebody local, you know how it’s being processed,” Ervin said. “It’s just keeping the money in the economy in southern Illinois.”

There were about 15 participants and each one of them brought back a jar of dilly beans they’d made themselves with the guidance of Sawicki. Many of the participants said they can food at home already or would like to start using the techniques.

Charlie Howe, a member of the Sustainability Commission in Carbondale said that he would love to use these techniques because of familial ties and to help the environment.

“My mother and grandparents used this kind of stuff who lived through the Great Depression,” Howe said.