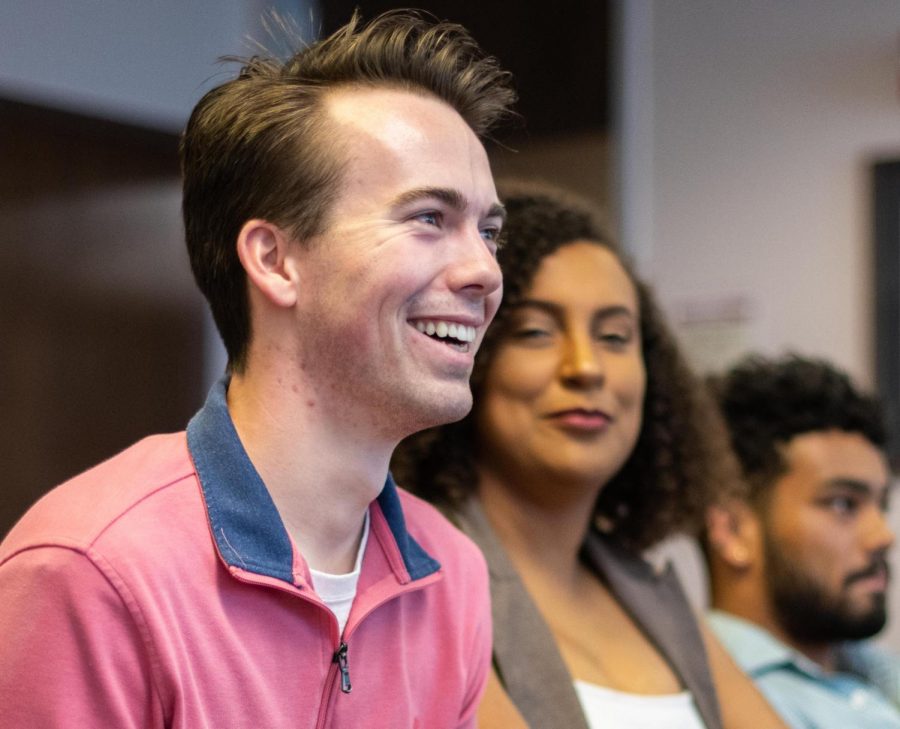 Colton Newlin smiles after winning the election for USG president on April 10, 2019 inside the Student Center.

Undergraduate Student Government’s executive board plans to take a more active role on campus and is preparing to enter the semester with plans to address iClickers, meeting visibility and touch on diversity in advertising.

Danny Vega, vice president of student affairs, said his first priority is to take a look at where everything is this year in order to have an idea of what’s possible. He also wants to improve diversity in campus advertising.

“Once I get back from break, I hope to try and address as many issues students have brought up as I can or direct them to others who can,” Vega said.

Newlin said the organization has both an advocate and financial support role for students and Registered Student Organizations.

USG has influence with administration, Newlin said, being able to have difficult conversations about issues on campus may be easier for USG members than students who don’t have a “quote, unquote title.”

Newlin said there are over three hundred RSO’s on campus, and USG is more than just a bank for them.

Ryan Reeverts, USG’s vice president of finance, said he’s extremely excited for the upcoming year on the executive board of USG.

“I want to ensure that students know that they can apply for funding through USG to expand opportunities to each and every RSO that needs financial assistance,” Reeverts said. “As well as ensuring that funding designated to help students is assisting organizations in the best ways and means that we can make possible within the USG funding board.”

“We’re also a resource for them to navigate through scheduling different types of events on campus,” Newlin said. “If they want to see a specific change that’s something that we could move forward in a resolution or an amendment in our constitution.”

Newlin said the +/- scale can be confusing for students because it’s not uniform. He wants to see a more standard application of the scale within a department or on a college level.

“I know some students, including myself, probably wouldn’t have taken a certain class because of the type of grading system, or vice versa,” Newlin said.

He said it’s kind of like students are going in blind to new classes because they don’t have access to syllabi before they register for new classes.

Newlin said it’s ridiculous that students not only have to buy an iClicker, but they also have to buy the access code, when there are free services available.

An iClicker is a handheld device used by teachers to receive quick answers, gauge participation or take attendance from students during classes.

“There’s just no sense in making a student pay extra for a class beyond [the] book, tuition and fees,” Newlin said. “It just seems like an unnecessary expense at the convenience of an instructor.”

One example of an alternative Newlin gave is ‘Kahoot!’, a free online platform which performs many of the same functions as iClickers but can be used by students on their phone or laptop.

USG will still be keeping their bi-weekly meetings in the student center, but Newlin said they also want to do alternate weeks in other areas of campus, such as Grinnell Hall or Becker Pavilion.

Newlin said having these special meetings will allow the conversation to be closer to students.

He said he also wants to improve the accessibility to students by keeping them updated on meeting times, dates and locations through their website and social media. Meeting agendas and minutes, what gets signed and funding bills will also be more accessible.

“So there’s that greater transparency as far as if a student can’t make it to a meeting, they can see exactly what we talked about, exactly what we passed,” Newlin said.

He said students would also be able to hold their senators more accountable this way.

In May, changes were made to allow RA’s to hold a second job on campus for a maximum of five hours a week.

Newlin said from what he’s heard from RA’s and Jon Shaffer, director of housing, there’s been support, indifference and negativity for the recent RA job policy changes.

“It’s something that we’re going to continue to look at,” Newlin said. “The main focus is that this is a trial period. It’s not the final say all as far as what the final policy is going to be.”

Newlin said there’s going to be room for change if it turns out well and an increase in hours or where RA’s are allowed to work may be possible.

Vega said his biggest project this year is TedxSIUC, an independently organized event.

According to the website set up for the upcoming event, Tedx is “an exciting environment that will challenge the way in which you view the world around you.”