Fall Sports 2019 Preview: We have high hopes for the Salukis 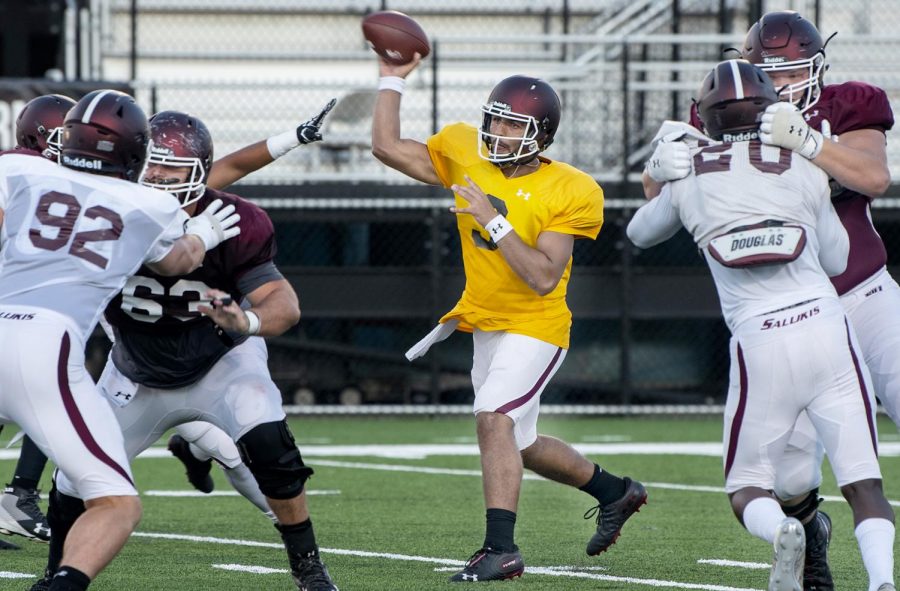 Kare Lyles, of Madison, Wis., attempts to throw a pass on on Thursday, August 15, 2019, at the SIU Football Scrimmage at Saluki Stadium. (Carson VanBuskirk | @carsonvanbDE)

While the 2018 season proved to be tough for a majority of Southern’s fall sports, Saluki fans have their hopes up for the upcoming 2019 season.

The upcoming season will feature the sports of football, women’s volleyball, men and women’s cross country and women’s soccer.

SIU football had a very rough go last season, as they only tallied one conference win and just two wins on the entire season.

The overall record for the Dawgs in 2018 was 2-9 with none of the wins being earned on their home turf.

While there have been no major staffing changes in the football program, we will be seeing several new faces on the field, including a new quarterback to replace former seniors Matt DeSomer and Sam Straub.

Each of these players have a different approach to the quarterback position and this could positively impact the Saluki Football Program.

Some definite holes will need to be filled in the roster with the exits of solid players like Raphael Leonard and Darrell James, but strong returners like D.J. Davis, Jeremy Chinn and Landon Lenoir will aid in closing the gap.

With strong returners and a new quarterback, things may very well be looking up for the Dawgs this season.

Similar to football, Saluki volleyball had a hard time adding wins to their record last season as they went 5-26 overall, winning just one of the 18 conference matchups they played in.

After the unsuccessful season, staffing changes were made when head coach Kari Thompson was replaced by former University of Alabama head coach Ed Allen.

SIU is hoping that Allen will turn the team’s luck around, and he seems to be the man for the job as he helped develop a winning team at Alabama, taking them to two NCAA Tournament appearances.

Last season the team lost its star player, outside hitter Maggie Nedoma, when she decided to transfer to another program. The program also lost senior powerhouse Patience Brown as she graduated in spring 2019.

A combination of a fresh coaching staff, seasoned veterans and energetic newcomers could set the Dawgs up for a successful season this fall.

Unlike a majority of the other fall sports at Southern, cross country had a rather successful season in 2018.

Many of the Saluki runners had tremendous performances during the season and took home wins at various meets.

Top performers for SIU included seniors Megan Krolak and Josh Maier. Losing these runners does set the team back quite a bit, but many of the younger runners on the team are showing that they are capable of filling the shoes of the former seniors.

Sophomore Kayla Schiera will be the one to watch this season as she put on an amazing performance during the 2019 track and field season.

As a freshman, Schiera was not only a runner up at the MVC outdoor championships, she qualified for NCAA Regionals and earned a fourth place finish at the USA U20 Championships.

Since the change in staffing in the track and field/cross country program, the Dawgs have seen a tremendous amount of progress, and we can only hope to see more in this upcoming season.

This 2019 season, women’s soccer will play its very first season at SIU. This new program is a little bit of a mystery for SIU fans, but one thing is for certain: it has brought about a great deal of excitement among Saluki nation.

The women will compete in 20 games this fall with 11 of them taking place at Southern.

Saluki Soccer will be coached by Grant Williams, who has been involved in coaching Division I soccer for 13 years.

While we aren’t certain what will come of the new program’s season, we are sure it will be full of surprises.

Despite last years performances, the Dawgs have a chance to turn things around, and the changes made to each program tells us that we just might have something to look forward to this fall.