Salukis need players to step up beside West 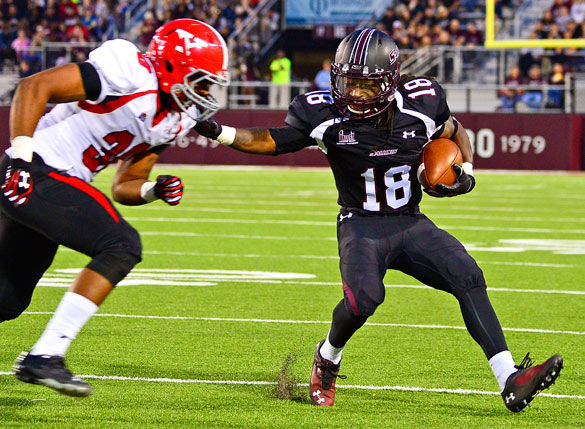 Throw him to the wolves.

This was coach Dale Lennon’s response to how he would prepare redshirt freshman quarterback Ryan West for the possibility of the teams’ excessive pressure based on his lack of experience.

“That’s the only way to see if he’s ready or not,” Lennon said.

Only time will tell if West is ready to handle the pressures of being the Salukis’ first-string quarterback. As he prepares for that daunting responsibility, star players, role players, backups—every player must elevate their game to take some of the spotlight off West.

“In these types of situations, you ask the other players to step it up a notch to support Ryan,” Lennon said. “We have to make sure he’s not getting hit to shake his confidence. Our receivers also have to be spot on. You just basically have everyone pick up their level of play.”

The offensive line has performed well all season, which was a big reason why senior quarterback Kory Faulkner was having such a great year under center. The line must perform at an even higher level now that a quarterback with such little experience is leading the huddle.

Receivers and running backs must make big plays to take the burden off West. Senior receiver John Lantz and junior tight end MyCole Pruitt ranks third and fifth, respectively, in the Missouri Valley Football Conference in receiving yards per game. They must continue that level of production in Faulkner’s absence.

Lennon said despite the bye week, players like Lantz and Pruitt handled the week just like any other to try and get on the same page as West.

“Going back to this past week, these guys really didn’t have the opportunity to get the week off because they were trying to get comfortable with Ryan,” Lennon said. “So that’s part of the confidence that we are trying to build within that unit.”

Junior running back Malcom Agnew averages 110 rushing yards per game in SIU’s four wins. He averages 34 yards per game in the three losses in which he has played in. Agnew as well as junior running backs Ken Malcome and Tay Willis must all produce in the running game because as is the case all season, when the Salukis produce on the ground, the Salukis come away with wins.

Still, West must be poised enough to direct the offense.

Lennon said he has sensed change in West this week in his ability to run the offense.

“He seems more comfortable and calm and is establishing himself as the quarterback of the offensive unit,” Lennon said.

Regardless, it is up to the more experienced players to lead the Salukis to victory, and Lennon said that includes the help of injured senior quarterback Kory Faulkner.

Faulkner endured the same situation as West in 2011, when then senior quarterback Paul McIntosh went down because of a shoulder injury. As a sophomore, Faulkner was called upon to lead the Salukis and has started every game until suffering the fractured index finger against North Dakota State University.

“I think Kory is going to be a very big help, just because he went through it himself,” Lennon said. “I think Kory can give (West) some insight and be that calming element. Naturally, Kory will be pretty involved on the sideline.”

Lennon said the team has moved on from Faulkner’s injury and expects West to play well and develop as the leader of the offense for years to come. This could be the start of West’s reign as Saluki starting quarterback and Lennon said there are multiple positives he sees in West’s game.

“I think he has the full package,” Lennon said. “I think the thing I like about Ryan is that as the backup quarterback he has spent a lot of time watching film. I think he can make the throws he needs in our offense. There is no reason for us not to expect the same things from Ryan as we would with Kory.”