The Big Ride for EB passes through Carbondale 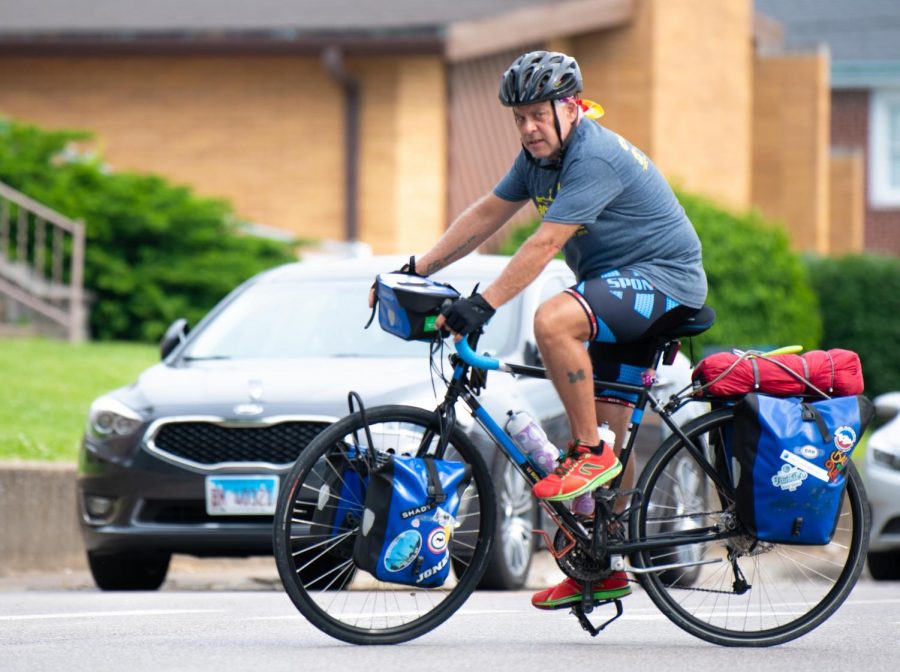 Rob Freed pulls out of Home2 Suites on Saturday, May 25, 2019 on Elm Street in Carbondale, Illinois.

By Emily Cooper , Editor in Chief

The Big Ride for EB 2019-2.0 started on April 24 in Yorktown, VA heading to Seattle, WA, and then back to Yorktown, according to the ride’s website.

The ride is to raise awareness for Epidermolysis Bullosa, which is a generic connective tissue disorder according to Leslie Rader, a volunteer board of director at Debra of America.

Debra of America is a non-profit providing support to the EB community through funding research for a cure and providing free programs and services, according to debra.org.

“If you think of the skin as Velcro, [people with EB are] missing the loops that holds the tops to the bottoms,” she said. “Anything that touches them, their skin blisters or sluffs off.

In the United States, an estimated 1 out of every 20 thousand births are affected by EB, Rader said.

Freed said he planned his route to be in Carbondale on May 24.

“My son Drake E was born with a very severe type of EB in 2007,” Freed said. “From complications from EB, he passed away at the age of 13 months.”

Biking became Freed’s outlet to try to cope with the loss of Drake E, he said.

“There was something about my time riding that became a very necessary part of my life,” Freed said.

Last year, Freed said he rode solo, unsupported for 225 days, 8,700 miles. His trip ranged from Jacksonville Beach, FL, to Seattle, WA, and then back to Coney Island, NY.

“Last year’s journey and this journey are very well received in the EB community and have become another loud voice for our hope,” he said.

Freed said the 2018 journey took approximately 8 months, and he hopes this journey will be finished by Halloween.

Rader said both she and Freed lost children to EB. She said she thinks the ride is amazing and she can’t imagine riding her bicycle every day for over 200 days.

“It is the hope of The Big Ride for EB to gain as much possible awareness for the rare skin disorder that claimed the life of my son,” Freed said.

Rader said Freed has an amazing effort to try and go from city to city on his bicycle to just raise awareness.

“It is a fundraising campaign as well,” Freed said. “Debra.org is a nonprofit that supports families, treatments, programs, wound care and research for Epidermolysis Bullosa.”

Rader said when you have a baby with EB, you have this little person that you can’t hold.

“There’s special medical supplies,” she said. “They’re treated like burn patients, they get their dressings done every day or every other day.”

Rader said she graduated in 1996 with a degree in athletic training.

“Being an athletic trainer I knew wound care, how to tape ankles and wrap legs,” she said. “Doing her dressings were something I was very proficient at.”

Freed’s route takes him to companies that are participating in trying to find better treatments for EB, he said.

“It’s very important to partner with them and be a voice,” he said.

Meeting families with EB kids along the way has been amazing, he said.

“Through the journey last year and the journey this year, there continues to be great interest in the EB community,” Freed said. “These journeys and the awareness help us find hope in coping with a truly horrific disease.”

Emily Cooper, Editor in Chief, can be reached at [email protected] or on Twitter at @ecooper212.