The Daily Egyptian • May 1, 2019 • https://dailyegyptian.com/94185/arts-entertainment/guebert-booksmart-earns-top-marks-leading-to-may-24-release/ 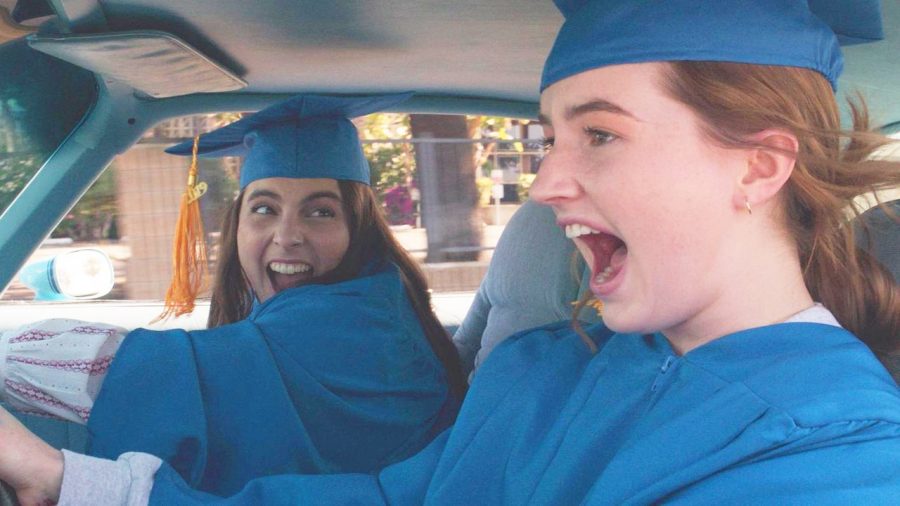 Coming of age films are, in my opinion, some of the hardest films to make.

As a filmmaker who just went through nearly eleven months of screenwriting, rewriting and production on a coming-of-age short film, I promise this genre is incredibly hard to perfect – or even do well.

For every successful one, there are dozens more which collect dust. In full honesty, I haven’t seen a really good coming of age film based in high school in a very long time. Enter Booksmart, the directorial debut of actress Olivia Wilde.

The film centers on Amy (Kaitlyn Dever) and Molly (Beanie Feldstein), two straight-A students who, after learning all of their peers will be attending elite colleges despite their lack of work ethic and love of parties, decide to have one night of partying. What they get instead is an insane night filled with yachts, drugs, turmoil and a lot of self-realization.

The best thing about Booksmart is the performances.

Every single performer in this movie brings their best and embodies each character in a way which makes you understand who they are without having tons of exposition to set them up.

The two standouts, however, are easily the film’s two stars. Beanie Feldstein is a comedic tour-de-force, delivering each line with almost perfect timing every single time. Feldstein also does an amazing job of showing Molly’s growth throughout the film, allowing the audience to slowly understand her intentions and her interactions as the film progresses.

Her costar, Kaitlyn Dever, delivers one of my favorite performances in a while. Amy has to balance her social awkwardness with her desire to be with her friend before leaving for the entire summer in a way which Dever absolutely nails.

Amy is also a lesbian, which becomes an important plot point for the film and gives Amy the opportunity for a lot more character development and growth throughout the movie. Also, I gotta give a shout out to Billie Lorde, who is sheer comedic perfection in this movie and never once does one of her beats miss.

The film is also just genuinely funny. The script is incredibly tight with joke after joke hitting at the perfect time for the film (I feel it’s worth noting the entire screenwriting team was female). Nothing ever feels out of place or rushed, not even an entire sequence where the two leads become dolls.

The film’s two lead characters are strong feminists, and the script never allows that to become the butt of a joke. Instead, it places Amy and Molly in situations which challenge their beliefs and brings humor to societal norms and opinions on certain matters. It’s an incredibly well-executed film throughout, and, for me, that all comes from Olivia Wilde.

Wilde’s direction of the actors and the scenes helps to keep the story flowing as well as it does. She also shows her chops at dramatic filmmaking, with the last half hour containing a lot of emotionally charged and important moments which never once fall flat.

Many have criticized Booksmart for being a “female Superbad” or “lesbian Superbad”, as one of my friends, who also loved the film, put it. And, yes, it’s very similar in style to Superbad (which, interestingly enough, Feldstein’s older brother, Jonah Hill, starred in). But what sets this film apart from all of the raunchy comedies share similar ideas is that Booksmart allows for the characters to really grow, and you really feel as if everything you’re seeing is believable.

It’s that very believability which makes Booksmart so good on every level. It feels like high school and it feels like real life. It’s everything a coming-of-age film with this setting should be, and so so much more.

Booksmart is set to be released nationwide on May 24th.