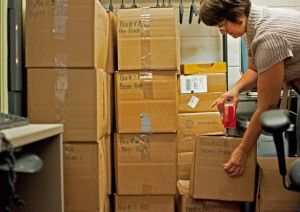 A major campus building since the 1950s will see new purpose as several of its staple offices have begun transitioning into a new centralized location.

Most offices in Woody Hall’s various wings have started moving to the newly constructed Student Services building. The moving process began during the weekend and will continue throughout the following weeks. Offices that serve as a major focal point during the admission process, such as Financial Aid, will no longer reside in Woody Hall but rather a more convenient location for students.

“I started my career here, and my parents used to have their morning coffee here when they were students,” Suski said. “So it’s a little emotional for me to leave the old Woody Hall because this is where I came to get admitted when I became a student.”

Although many offices are moving into the new building, a few offices and programs will remain in Woody Hall. The Disability Support Services office will not be joining its fellow offices in the big move.

Jalisa Coleman, a senior from Chicago studying journalism and a student employee in the Disability Support Services office, said she wishes her office would move into the new building because it is beautiful, but moving into a bigger Woody Hall office would be more convenient.

“I am excited for the offices and programs that are moving this month,” she said.

The Woody Shuffle is a paperwork hiring process new student hires undergo to finalize their employment, and many consider it an exasperating tradition that may not be sad to bid farewell.

Kevin Bame, executive director for finance, said the move’s main goal is to completely repurpose Woody Hall, and navigating the building was difficult for many students. With this move, he said, the Woody Shuffle would ideally be eliminated all together.

“This upcoming weekend, we have plans to move the Registrar office and the Financial Aid office,” he said. “Then Monday, we will be moving the Bursar’s office, and that will complete the first moving installments.”

Although the enrollment management offices will move, Suski said some offices that are not moving may relocate to a new area in Woody or different buildings altogether.

Bame said architecture and engineering firms were hired to go through Woody Hall and figure out ways to repurpose the area.

“It may take some time, but eventually the Center of International Excellence will be placed in Admission’s old location,” he said. “Some financial services and Human Resources will be moving. The Center for Inclusive Excellence (will) also be moved and will be taking up a fair amount of space.”

The Student Services building, located by the Student Center, is slated to open for business during Homecoming weekend.

Charinder Thompson can be reached at [email protected]