The Daily Egyptian • May 2, 2019 • https://dailyegyptian.com/94127/uncategorized/in-the-war-room-with-warfel-spring-summary-fall-look-ahead/

In the War Room with Warfel: Spring summary, Fall look ahead 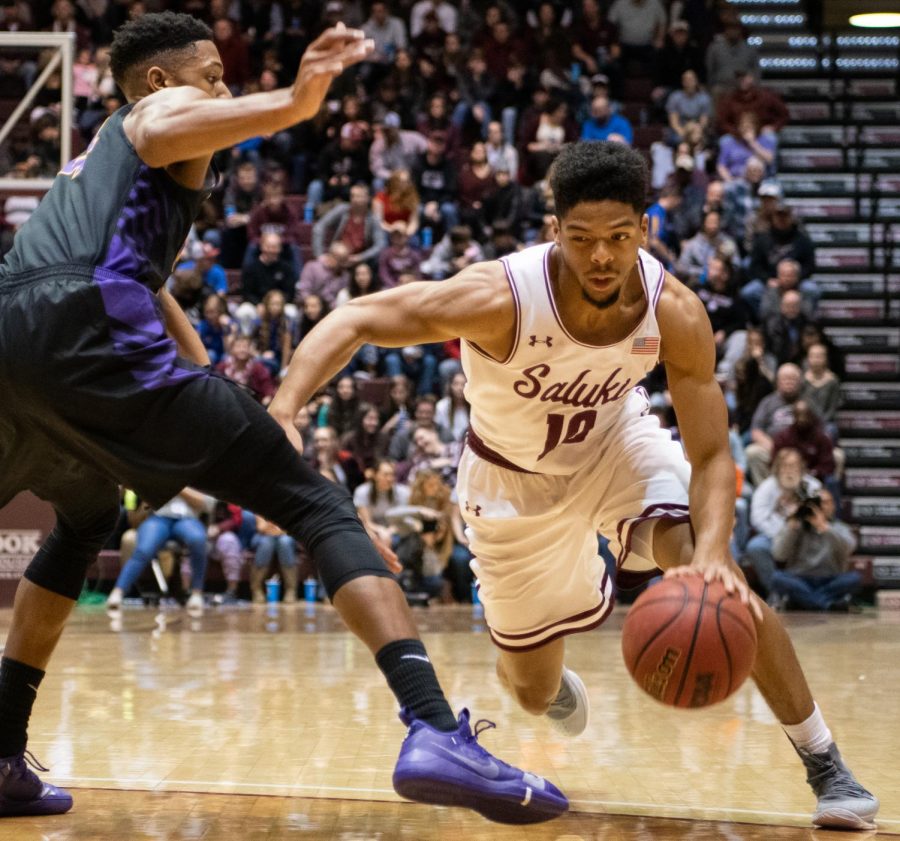 Junior guard Aaron Cook advances the ball on Wednesday, Jan. 23, 2019 during the Salukis' 70-62 win over the Northern Iowa Panthers at SIU Arena.

There are five teams remaining playing out the rest of their spring schedule, with men’s and women’s golf advancing to the postseason, softball, track and field and baseball coming to a close.

Looking at the rest of this season, excluding the golf teams, I expect the softball team to make the NCAA tournament and some of the athletes from the track and field team shattering records as well.

Fans should not be surprised to see a rematch of the Missouri Valley Championship final from last year when SIU fell to Drake, 4-1.

The softball team up to this point has won 31 games this season with four left to play and if you have not had the chance to see this team play there are four home games left in the season.

From mashing the ball with four players on the team to having five home runs or more with freshman Ashley Wood leading the way with eight home runs.

As for baseball at 1-9 in the MVC and riding a 10 game losing streak, I just want a win at this point and with Illinois and Murray State coming to town this week I hope they take one of the two.

The sport to kick off the fall season for Southern will be the women’s soccer team with their first year in action, I set no expectations for those women other than to go out and compete – that’s all I ask for in the first year of a program.

I expect cross country to still be running strong despite the loss of Josh Maier, junior Megan Krolak will continue on the women’s side for that team but another man will be left to fill Maier’s shoes.

Turning the eyes to basketball, for the men’s team it will be the first year under new head coach Brian Mullins and they have yet to release their schedule but I would expect this Saluki team to finish anywhere between fourth and seventh in the conference.

The contributions of Aaron Cook and Eric McGill in their final season will be key to Southern’s success next year, under Mullins’ system.

For women’s basketball this young team had this season to get experience, but between junior Nicole Martin and sophomores Makenzie Silvey and Abby Brockmeyer a top three finish in the Valley would not be unexpected.

Regardless of how the golf teams finishes or the softball or baseball team, or track and field, it has been a fun Spring for SIU athletics.

Looking ahead into the fall, I urge all fans of Southern come out and support this women’s soccer team on August 17th in their exhibition game against SEMO as they kick off the fall season of sports with a kickoff set for 7:00 P.M.