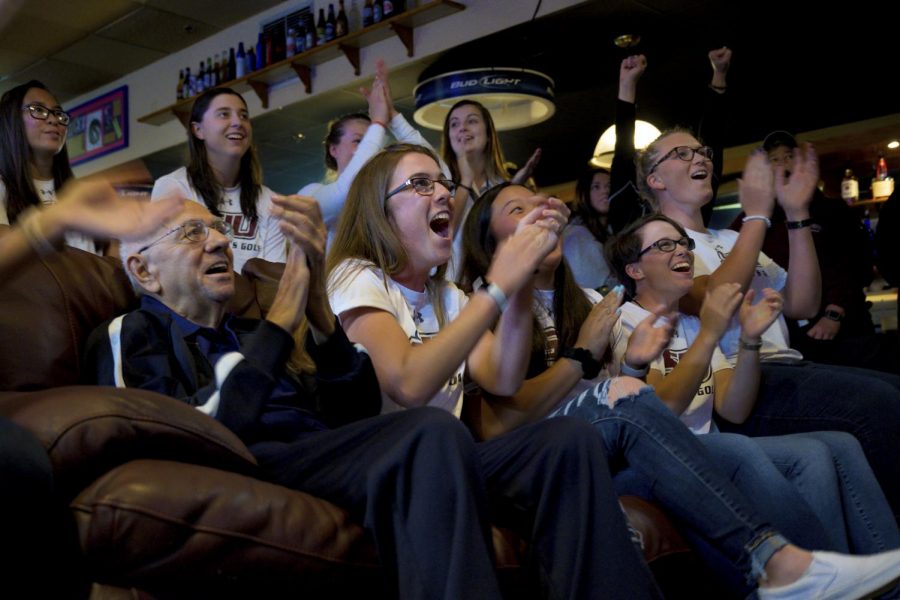 All eyes were turned to the television screen while fans and members of the women’s golf team waited to see “Southern Illinois” flash across the screen. Cheers erupt and fill Copper Dragon – the team is heading to Washington.

Jackie Biggs, a graduate student from Englewood, Colorado, said she is looking forward to the opportunity to play on a large stage.

“I am speechless, honestly I don’t know how to describe it,” Biggs said.” It still hasn’t even quite hit me yet that we’re going there even though I just saw on the screen we are.”

Southern was announced as the 18 seed and they are set to play in the Cle Elum Regional in Washington. The University of Southern California is set as the one seed.

Even knowing that the Salukis had secured their spot in the tournament by winning the conference tournament, Biggs was still curious as to where they would be playing.

Moyea Russell, a sophomore from Lake Orion, Michigan, described the opportunity to play in the NCAA regionals as “unreal.”

“Honestly, it’s unreal, we won conference last week on Tuesday and today we found out we’re going to Washington for regionals,” Russell said. “I can’t wrap my head around it – we’ve come a long way from the beginning of the season to now.”

Head coach Danielle Kaufman said she saw the potential this group of women had to win the tournament with the opportunity to advance to regionals as early as the first tournament.

“At the beginning, our first tournament, I could see the determination in their eyes,” Kaufman said.” That right there was a lot of help for me , the kids had the drive so we just had to get them mentally prepared.”

Kaufman credited the short game and how much they worked on it over the season as a primary reason as to how the Salukis now find themselves off to Washington.

The team overall is fairly young with a lone graduate student in Biggs and one senior in Sun Jung and Kaufman credited this young team with determination.

“Very impressive, but that just goes back with the fact that they had the drive,” Kaufman said. “They listened, they worked outside of practice, they just did whatever it took.”

The team initially thought they would be playing in Alabama, even though Kaufman told the team she thought it would be fun to go to Washington.

“I kept telling them, wouldn’t it be cool to go to Washington,” Kaufman said. “We’re excited about Washington, we all thought Alabama, for some reason that’s just where we thought we were going.”

Kaufman assured now that the team knows where they will be teeing off come tomorrow they will be examining the course.

“They have a lot of great teams, I’m still confident that this team can make that top six,” Kaufman said. “If we continue to do what we have been doing these last few tournaments, I think we can make top six.”

Kaufman, was named 2019 MVC Coach of the Year, in a vote held by all the other coaches in the conference and looking back on this season with the regionals ahead she said the girls have had their goal in sight.

“It’s just been awesome there is no words to describe how I feel about this season,” Kaufman said. “The kids are just remarkable kids, we just all clicked, we knew what our goal was.”

Russell said she saw how the team has clicked, especially after coming back from Christmas break and how they came together to reach their goal.

“From the beginning of the season as a team, we were all kind of individualized,” Russell said. “Really when we got back from Christmas break, we all were like in order to win we need to be a team and a family.”

Russell believed that the family mindset helped even on the course knowing that no matter what happened each girl would pick each other up.

“We had no worries, we knew if I make a double [bogey] one of my teammates will make a birdie,” Russell said.

Aside from the rain outside, the only water found in Copper Dragon were the tears of joy for the women’s golf team knowing that their season is still ongoing.