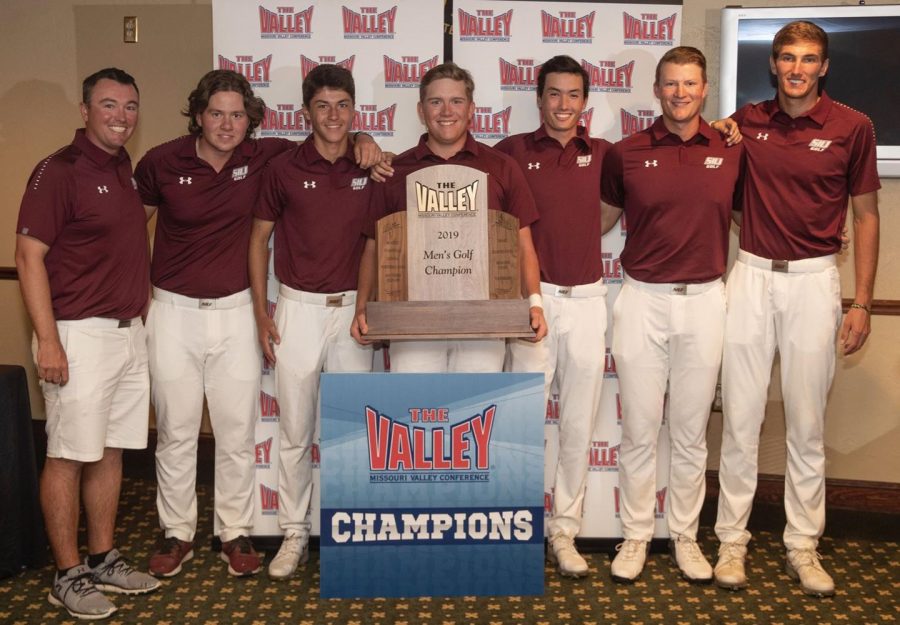 The SIU Men's Golf Team poses for a portrait on Tuesday, April 23, 2019, after winning the 2019 Missouri Valley Conference.

With the conference win, Southern claimed the conference’s automatic bid to the NCAA Men’s Golf Championships and will represent the MVC at the NCAA Regionals, May 12-15.

“This moment, this opportunity is exactly what we trained for all year long,” Justin Fetcho, SIU head coach, said. “I couldn’t be any more proud of how this team stayed mentally tough and executed golf shots down the stretch. It’s just a testament to their talent and belief in themselves.”

Wilhoit (-3) finished third on the leaderboard, while Gannon and Besard tied for fifth place. All three golfers earned All-Conference honors and Besard was named Newcomer of the Year. York tied for 10th place and had the tournament’s low score of the day with a 4-under par 68.

“Everybody was excited and chomping at the bit to play this morning,” Wilhoit said. “There was no doubt in my mind that these guys were going to play well.”

Seniors Gannon and Wilhoit came into the tournament looking to end their SIU career way in the same way they started it, having both won the tournament their freshman year in 2016.

“We were hoping for at least three [championships],”Gannon said. “We took second last year, that would be nice, it would be a nice way to close it all out.”

The Salukis were looking to complete a clean sweep in the MVC Championship for golf as the women had won last week in their tournament.

Gannon was hoping to add another trophy to the case for golf at SIU and in turn, outpace the seniors on the women’s golf team with titles in his freshman and senior year.

“We both want each other to do well,”Gannon said.”It’d be nice if we could say us seniors have two versus their one.”

On day one of the tournament on Monday Illinois State pushed out to a six stroke lead early over SIU, but the Salukis cut that lead to one stroke being led by Besard.

Besard finished day one in second overall and one stroke behind the leader in Illinois State’s senior David Raue, after he carded 75 in the first round then rebounded with a score of 67 in the second round.

“Like most freshmen, Matt pressed a little bit early and tried to make things happen, but late in that first round he started to relax, and all of the sudden, there’s when the birdies come,” head coach Justin Fetcho said. “He hits it so straight and the course sets up well for him, because there’s a premium on accuracy.”

Wilhoit and Gannon kept the team even in the first round with both combining to go three under par, finishing day one in fourth and eighth respectively.

“We’ve trained all year for a moment like this and we’ll do our best to rise to the occasion,” Fetcho said. “We have to stay patient. We can’t go out there and try to force things and make a move. We have to take the Tiger Woods approach — stay in position and stay patient, wait for an opportunity and cash in.”

Starting day two just one stroke behind Illinois State, Southern took the lead early in the day and finished with a 10 stroke lead over the Redbirds, as SIU finished at minus seven in the final round.

Wilhoit was the top finisher for SIU coming in at third with a total three round score of 213, Besard dropped down into a tie for fifth after shooting a 74 in the final round, Gannon finished in sixth with a score of 70 in the final round.

“The great thing about these guys is this is just the start of their postseason run,” Fetcho said. “We’re not going to Regionals for a celebration. Our team and our seniors believe we can get to the national championship.”