‘Pooch’ gets off on the right foot 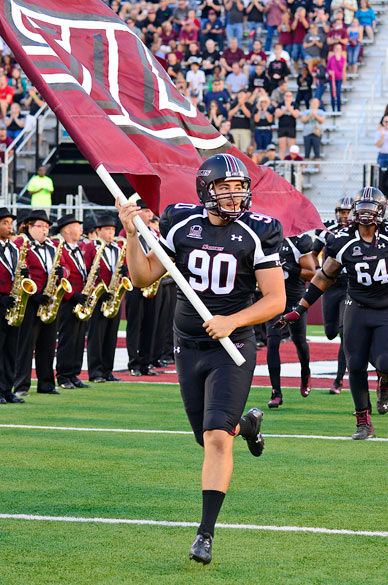 Senior punter Austin Pucylowski has been pinning opponents inside the 20 since he arrived at SIU.

Pucylowski, who is referred to as “Pooch” by his teammates, is a four-year starter and the leader of the special teams unit. He was named to the Missouri Valley Football Conference All-Newcomer Team as a freshman; by the time he was a junior, he was named All-MVFC Honorable Mention. For his career, Pucylowski is sixth all-time at SIU in career punt attempts, sixth in career punting average, and seventh in career punting yardage.

It is safe to say Pucylowski does the bulk of his damage with his right foot, but Pooch considers himself a hands-on type of guy.

“When I was a kid, I always liked to build things, I was very handy,” Pucylowski said. “I get it from my dad. He was an electrician, he’s very handy. He would never call someone and have someone else do something, he would always do it and he was like that with me.”

For this reason, Pucylowski has dreams of becoming an orthopedic surgeon.

“With the ability I have to go to medical school, an orthopedic surgeon would be the closest thing to being a ‘handy man,'” Pucylowski said. “(People) coin orthopedic surgeons as the carpenters of medicine, this way I’ll be able to fix people’s body’s, bones and knees.”

Pucylowski is on the right track of having his dream come true — he carries a 4.0 grade point average in biological sciences on a biomedical sciences track.

“It’s really long, but that major is mostly geared towards people who are looking for professional school like PA (physician assistant) school or med school,” he said. “With my aspirations of med school, I would need to have a very good GPA and I’ve kept a 4.0 and hopefully I’ll get one this fall.”

With the demands of collegiate athletics, any student athlete would struggle balancing athletics and academics, let alone someone with a major as difficult as Pucylowski’s — Pooch said he was no exception.

“(Time management) was probably the toughest thing that happened to me when I first got here,” he said. “My first fall semester playing I struggled with my time management skills just because football demanded a lot more time than it did in high school and some of these classes I was taking were a lot more difficult than what I took in high school, so that semester I really struggled.”

After enduring a tough first semester, Pucylowski did what any great athlete would do when faced with adversity — he adjusted his game plan to what works for him.

“That first semester I really struggled, but I was able to kind of get into a rhythm and I really haven’t got out of that rhythm and I’ve been able to just focus,” he said.

For the past four years, Pucylowski has been able to develop a rhythm on the gridiron as well. He was selected to the College Football Performance Awards preseason punter award watch list as well as honorable mention on the MVFC Preseason Team. Pucylowski has pinned 10 punts inside the 20-yard line this season, which ranks fourth in the conference.

However, as good as Pucylowski is, Coach Dale Lennon said he would rather not be in a situation to use him.

“Austin is at the position where I don’t want to see him on the field, therefore he’s probably underappreciated,” Lennon said. “He is an extremely valuable weapon for us as far as creating field position. Your punter can help your overall performance as a football team and can be a difference between a win or a loss.”

Junior long snapper Thor Hadfield has a close relationship with Pucylowski. Not only is Hadfield Pooch’s long snapper, his is also one of his best friends.

Hadfield said Pooch garners much respect inside the locker room.

“(Pucylowski) is a big special teams factor for us,” Hadfield said. “The way he’s able to punt and give the other team poor field position is huge, so other guys being able to see that respect him on the field and as a senior he has paid his dues.”

As for Pucylowski’s grades, Hadfield said Pooch rarely acknowledges them.

“(Pucylowski) does it the right way,” Hadfield said. “He goes to school like everyone else and he does his assignments. He keeps it hush hush and does his thing and obviously does pretty well at it.”

Although Pucylowski’s goal is to become a surgeon, he said he would not ignore the opportunity if an NFL team comes calling. It is always good to have a backup plan, he said.

“If the opportunity (of playing in the NFL) was presented to me, who wouldn’t want to take it, even if it’s a tryout,” he said. “It’s good because I have two plans, so obviously if the NFL doesn’t work out, hopefully I get into med school.”