In the War Room with Warfel: Lebron James made the Lakers worse 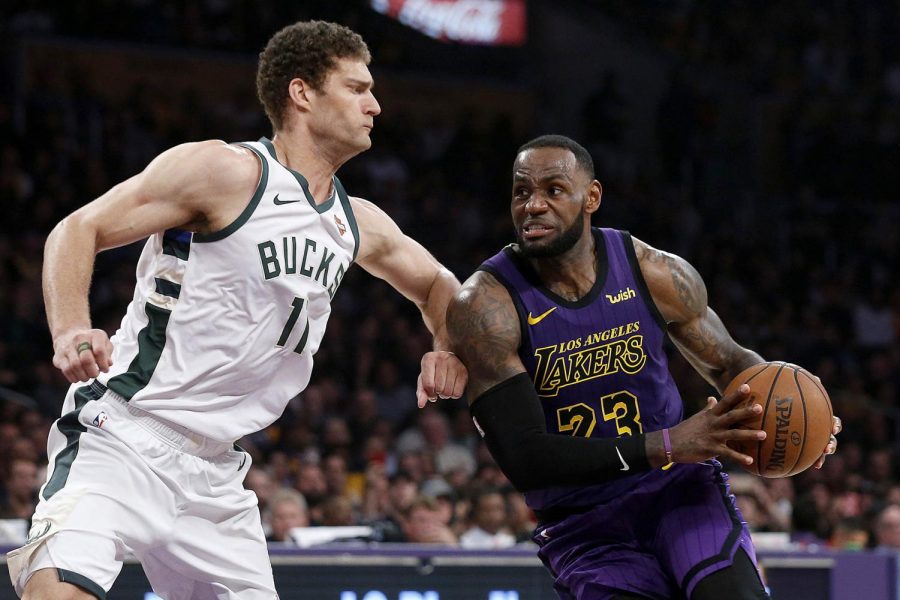 The Los Angeles Lakers' LeBron James (23) drives to the basket against the Milwaukee Bucks' Brook Lopez (11) in the second half at Staples Center in Los Angeles on Friday, March 1, 2019.

Lebron James has made the Lakers worse – with the official end of the NBA Regular Season last week and now in playoffs, I’m confident on this.

During 55 games played, a season shortened due to a groin injury, James averaged 27.4 points per game, 8.5 rebounds per game and 8.3 assists per game which is a good line for any basketball player.

The Lakers announced they were resting James for the rest of the season on March 30. In the six games they played without James, the Lakers went 3-3, losing to the OKC Thunder, the Golden State Warriors and the Portland Trailblazers.

James suffered a groin injury on Christmas and left a game where the Lakers beat the Warriors – he went on to miss 17 games while recovering from the injury and the Lakers only won six during his absence.

The Lakers, without James, finished their 2017-2018 season with a 35-47 record. A record which held the 11th place spot for the team in the NBA Western Conference.

This year, with James, the Lakers finished with a 37-45 record holding the 10th place spot in the conference.

During the 55 games James played with the Lakers and excluding the 23 games not played, the Lakers were 20-14 before his injury and 8-13 in the 21 games he played returning from his leave.

Looking even deeper into the stats, James was the leading point scorer for the Lakers in 20 of the 28 games the Lakers won when he was playing.

My argument however does not hinge on James not being an elite player and clearly having the ability to make his team better. The argument is James made the Lakers worse by stunting the development of young players who started last season, especially Kyle Kuzma.

Kuzma, along with his fellow teammate Brandon Ingram, averaged 16.1 points per game in the 2017-2018 season as leaders in that year’s Lakers team.

This season you did see a slight uptake in their points per game with Kuzma’s being 18.7 and Ingrams being 18.1, however their shot attempts also went up by two shots per game so the slight increase is not unexpected.

But you ask anyone what is most important for the development of young players like Kuzma or Ingram is how much time they spent on the court and both players minutes played went up by about two minutes per game.

Kentavius Caldwell-Pope was another rookie whose playing time drastically decreased with the  addition of James.

Another thing that is important when it comes to the development of rookie players is continuity, and with that your eyes turn towards former head coach Luke Walton.

While Luke Walton may best be remembered for 39-4 start he helped to lead the Warriors to in the 2015-2016 season, his time in Los Angeles was short-lived in my opinion.

Walton and now former president of basketball operations Magic Johnson fell as casualties in what I title as the “Lebron Effect.”

The “Lebron Effect” is James running the team how he wants it to be ran such as the additions of veteran players like Rajon Rondo and Lance Stephenson.

What also comes under the “Lebron Effect” is the head coaches in 2016 David Blatt was fired by the Cleveland Cavaliers after what many in the media saw was a clear distaste by James for Blatt.

So, the Cavaliers organization rather than discipline James because he was their star player decided to get rid of the “problem” for James, and Walton was a casualty to James much as Blatt was.

At the midpoint of the Lakers season, I was saying James had made the present Lakers worse, but I thought he had the chance to better the future.

Now as the season has ended and I look back especially with the firing of Walton and Johnson mysteriously stepping down quickly not only did James hurt the present team, but he has hurt the future team as the Lakers organization is in search of a coach that will be a yes-man to James.