‘This is about power:’ Faculty Association discusses academic reorganization 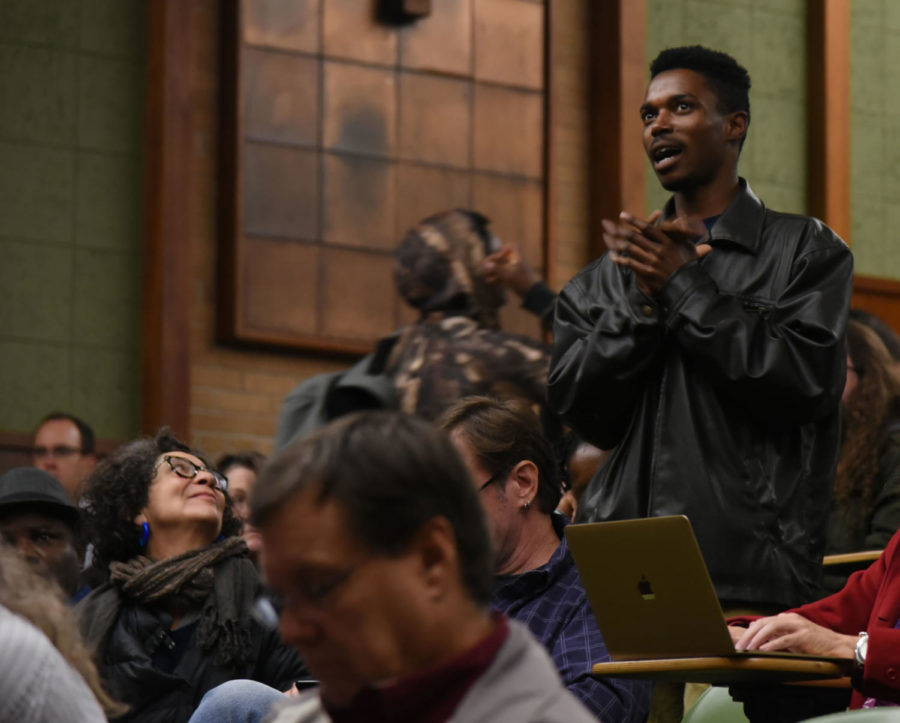 Daniel Drummer, a sophomore from Chicago studying hospitality and tourism administration, expresses his concerns regarding late Chancellor Carlo Montemagno's Reorganization Plan Wednesday, Oct. 25, 2017, during an open forum at Parkinson Hall. "A school where you're bringing in a police academy but not putting as much focus on Africana studies is only perpetuating that we're fighting against," Drummer said.

The SIUC Faculty Association, a union for tenured faculty members, met Monday to discuss the reorganization, which they referred to as a “troubling new phase in the campus restructuring process.”

According to a memo sent out by the association, the proposed School of Education and the School of Analytics, Finance and Economics have been sent to interim president J. Kevin Dorsey for approval despite negative faculty votes of 16-7 and 9-6 respectively.

Dave Johnson, president of the Faculty Association, said some of the faculty concerns about the reorganization include lack of organized logistics and rather than reporting to deans, new schools directly reporting to interim provost, Meera Komarraju.

Johnson said the administration is setting a precedent of not listening to faculty and believes the precedent will affect more faculty in the future.

Clay Awsumb, president of the Graduate Professional Student Council, said plans moving forward without the support of faculty should concern everyone.

“What is going to hinge on whether something succeeds or doesn’t is whether the persons actually believe in what they are going to be tasked with doing,” Awsumb said.

George Boulukos, an English professor at SIU, gave the audience updates and his report on the faculty proposed “School for Social Sciences and Humanities.”

Boulukos said organizers for the proposed school recently met with the interim provost in regards to their push to retaining chairs and the department structure in the new school.

“We believe that gives us the best ability to control our own curriculum and to work within our disciplines as they have been defined,” Boulukos said.

Boulukos said representatives from the interim provost’s office told the group they would never allow department chair structures as part of a new college.

“They told us that they think the idea of sectors is terrible because it creates a structure that is in place and once structures are in place, they become difficult to dismantle,” Boulukos said.

Boulukos said the bottom line of the meeting was power.

“They told us directly and indirectly that this is about power,” Boulukos said. “They want to preserve the maximum power to make decisions and to override any considerations we bring forward.”

Patrick Dilley, a professor in the Educational Administration and Higher Education department, said this plan is “as ethically and conceptually vapid as the notion that somehow faculty need to take place of the administration.”

Dilley said he agreed with Boulukos.

“This is entirely, entirely, about power and inept leadership,” Dilley said. “We have not been able to have a qualified person actually take an advanced position in leadership in this university for at least a decade.”

Brione Lockett, SIUC Student Trustee, said he has a problem with individuals with interim titles making permanent decisions for the university.

“The university does what it wants and gets what it needs but they don’t give the students what they deserve,” Lockett said. “If proper protocol and requirements were not followed for hiring, how can hired individuals make long-term decisions for the university?”

Virginia Tilley, a professor of Political Science at SIU, asked at what point the administration will be held responsible or when faculty will take drastic action.

“At what point does this whole thing break?” Tilley said. “At what point is either the administration held responsible for an abysmal performance that has led to this [the enrollment crisis] […] and at what point the faculty might consider drastic action.”

Tilley said she does not see the situation turning around and said she believes it will only get worse from here.

In a statement to the Daily Egyptian, Komarraju said the reorganization process has included many meetings with faculty, staff and students to hear their concerns/suggestions and to work collaboratively toward solutions.

“It is not realistic to expect everyone to agree on all aspects of a proposal, and it has been understood by all parties from the beginning that faculty input is advisory,” Komarraju said. “However, we believe that the significant faculty input we have sought and welcomed has shaped nearly all of the proposals for the better.”

Komarraju said the reorganization is about re-envisioning the university and creating more opportunities for students and faculty.

“It does not give any entity more or less “power” than exists in our current structure,” Komarraju said. “We recognize that organizational change is not easy and requires all members of an organization to be collaborative, to be respectful and to be willing to consider change.”

Staff reporter Kallie Cox can be reached at [email protected] and on Twitter at @KallieECox.