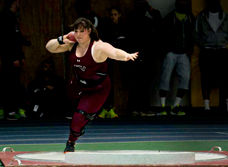 After breaking the American collegiate record in the hammer throw, senior DeAnna Price was named Missouri Valley Conference Women’s Field Athlete of the Week for the sixth time in the past seven weeks.

Price set the record last weekend against SIUE in the inaugural Southern Clash with a throw of 72.66 meters breaking the previous record of 72.52 meters held by former SIU thrower Brittany Riley.

She also broke the SIU record for hammer throw as well as the Korte Stadium record in Edwardsville and moved up to No. 2 on the all-time NCAA hammer throw list.

The Troy Buchanan High (Troy, Mo.) alumna also finished first in discus and second in shot put with a season-best throw of 16.18 meters — the 19th-best throw in the NCAA West Region.