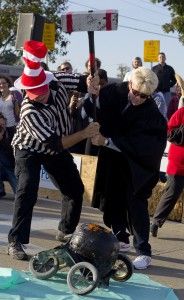 A 120-pound pumpkin painted red and decorated with “Toy Story” characters hurtled down Mill Street Saturday, slowing only when it bounced off a makeshift wall. When the pumpkin on wheels got back on track, it pushed a pumpkin about a third of its size past the finish line.

Eli Jacobs’ pumpkin was a little beat up after the first heat.

“I have some fixing to do,” he said as he looked over his bruised pumpkin sponsored by his family’s business, Jacobs Air Conditioning and Heating.

Jacobs fixed the pumpkin enough to race in the winner’s heat and took home the first place prize at the first-ever Carbondale Pumpkin Race.

The event was spearheaded by Rotary Club of Carbondale-Breakfast member Marcia Sinnott, whose son helped put on

a similar event in Oswego based off the popular Manhattan Beach, Calif. race.

A member of the Rotary Club dressed as the Cat in the Hat read the rules, which were few, before the heats started at the blocked off section of Mill Street.

“Pumpkins must travel unassisted on wheels inserted onto axles that penetrate completely through the melon. No caster wheels. And no support frame or chassis will be allowed,” the rules read.

About 30 pumpkins were entered in the race, but not all of them made the trek down the underpass.

If a cheater was found, their gourd was smashed in front of the jeering crowd by “the judge,” former SIU women’s golf coach Diane Daugherty, who wore a judge’s robe.

“The judge has no mercy,” Daugherty said to the crowd when she found the first cheating pumpkin racer.

Those young and old let go of pumpkins with names such as Old Grandpa, El Diablo, Lance Gourd-strong, and also pumpkins with themes like Disney princesses and the float made in “Animal House”.

“I thought it was a very enthusiastic crowd,” Sinnot said. “People really got into the spirit, which is what we wanted.”

Participants paid $5 for each heat and those under 18 had the option to enter with two canned food items.

“At some point it would be nice if this was a fundraising event for Rotary Club of Carbondale, but right now our intent is just to provide a family-friendly, fun event and I think we did that,” Sinnot said.

Several Carbondale businesses sponsored pumpkins with themes relating to their industry. After Wells Fargo’s pumpkin, Money Train, lost to Jacobs, they challenged three other banks to a race.

While Sinnot said she was pleased with the turnout, she hopes the event will grow next year. She said the event would not have been possible without the help of Carbondale Main Street, the Carbondale Convention and Tourism Bureau, and the city who closed the street and provided law enforcement.