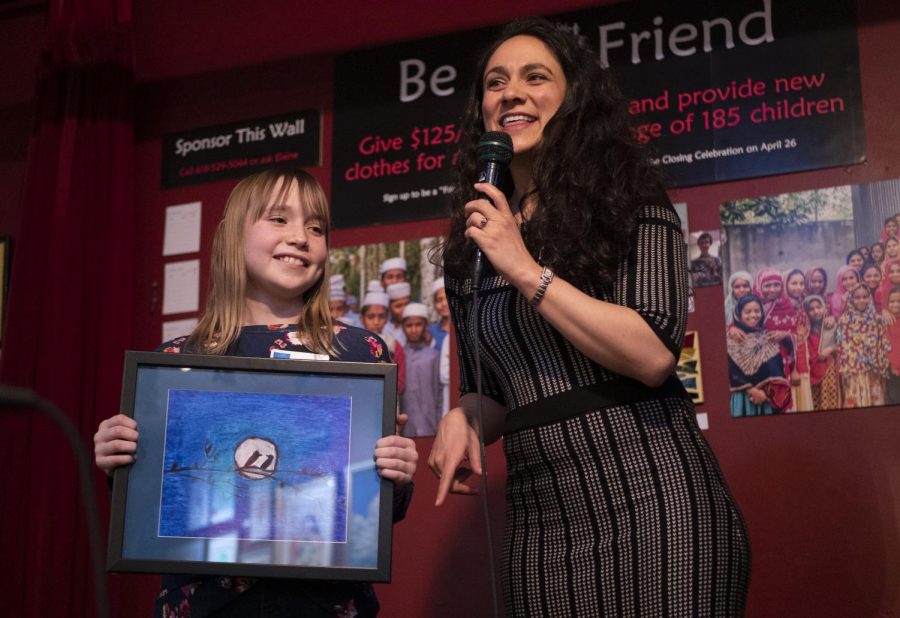 Elise Warshawsky presents her art alongside For Kids’ Sake Director, Shema Ruperto, at the For Kids’ Sake Art Auction on Friday, March 22, 2019, in Longbranch Cafe and Bakery.

Over 100 artists have contributed pieces to this year’s For Kids’ Sake Art Auction which opened on March 23 at Longbranch Cafe.

All the proceeds from the paintings, which will be displayed for six weeks, will go towards helping orphaned children in Bangladesh, one of the poorest countries in the world, said Shema Ruperto, For Kids’ Sake director and art auction coordinator.

For Kids’ Sake targets helping children, schools and orphanages in Bangladesh, according to the organization’s website.

“Through our assistance, thousands of lives are transformed in one of the poorest countries in the world,” according to the site.

The goal of the art auction is to raise $30,000 and the funds raised will help contribute to providing food, shelter, education and basic necessities to the children in the program, Ruperto said.

“Financial contributions are the way that we ultimately conserve the kid’s best in Bangladesh and that comes in all kinds of ways. You can buy artwork [or] you can become a wall sponsor,” Ruperto said.

Many people in the community and at SIU volunteer for the event, including an RSO run by president Gabby O’Brien, a senior at Southern Illinois University studying communication disorders and sciences, called Students For Kids’ Sake.

O’Brien has been involved with For Kids’ Sake since her freshman year and the RSO is dedicated to raising awareness to the events happening in Bangladesh and making it known to the public.

“Organizations like this can help people know the issues that are out there that people might not even know about,” O’Brien said.

Artists between the ages of 4 and 94 years old donated their art to the auction this year, Ruperto said.

According to Ruperto, the kids get really excited, often coming up to her and asking how many kids their art will be able to help.

Nova Morris, an 8-year-old in second grade at Unity Point, showed her enthusiasm on stage with Ruperto at the event talking about her three projects that are up for auction.

“I made it because I wanted to make people smile,” Morris said.

Ruperto said she firmly believes children are the best advocates for this cause because there is no limit to their desire to help kids their own age.

Community members can stop by Longbranch until the closing auction on April 26 to bid on art or contribute to the auction.

Staff reporter Elizabeth Biernacki can be reached at [email protected] or on Twitter at @EBiernacki_DE.