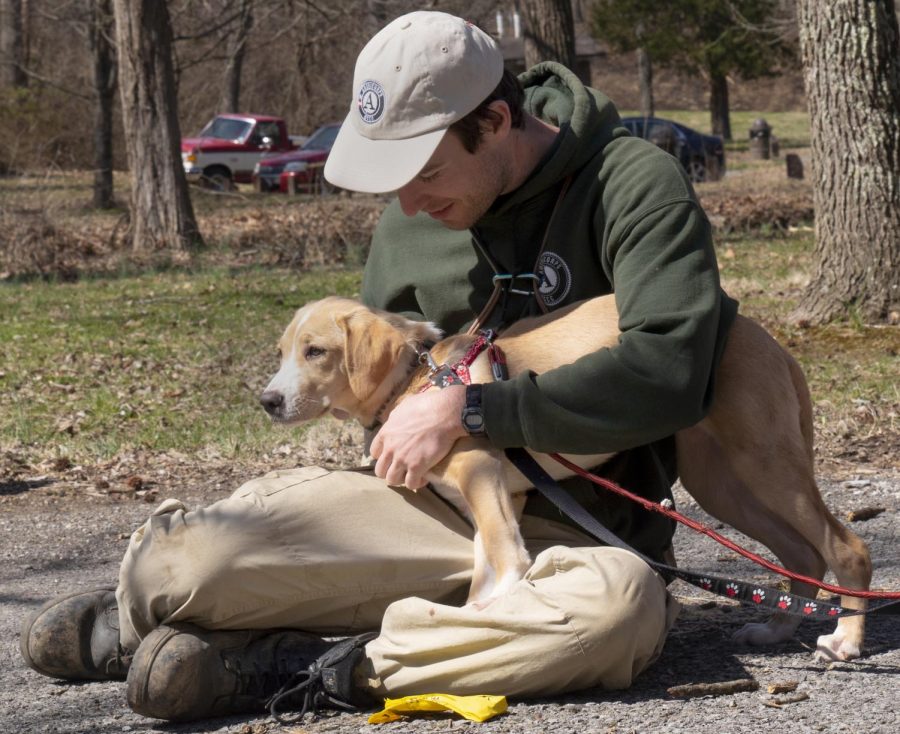 Giant City State Park partnered with Wright-Way Animal Rescue for the biannual “Hike with a Homeless Dog” event where volunteers around the southern Illinois area walk the trails with a dog from the shelter.

“We’ve done four of these before,” Jennifer Randolph-Bollinger, natural resources coordinator for the park, said. “A few years ago, I was doing research online and came across a state park in Texas that was doing something that was called ‘Hike with a Homeless Dog,’ so I looked into it a little more, and thought it would be a perfect fit for Giant City.”

The event is a great way to get the dogs outside and get them some exercise as well as getting people outside, Randolph-Bollinger said.

The possibility for an adoption is just icing on the cake.

“We usually have about 25 dogs,” Randolph-Bollinger said. “We offer two different sessions. We’ll do a 10 a.m. to 11 a.m. and an 11 a.m. to 12 p.m., 50 people usually register. We have several more that call that we put on a waitlist. Wright-Way has several volunteers that come out to help unload the dogs.”

Randolph-Bollinger said she knows the owners of Wright-Way, so she thought it would be a great fit for them to come out.

Erin Ellison, a staff member at Wright-Way, said Wright-Way is a non-profit, no-kill rescue which is located off of Old Highway 13, between Carbondale and Murphysboro.

“The goal is always 25 [dogs], but I believe we have 29 this year, that does include four alumni dogs that have been previously been adopted out, but they’re still here to enjoy the nice weather,” Ellison said.

She said it takes a couple weeks to plan out an event like this.

“We have to make sure that we have volunteers, staff, dogs and getting all of our gear together to get out here,” Ellison said.

She said this event is a good opportunity to get Wright-Way’s name out there.

“It seems like a lot of people don’t know who Wright-Way is, but when we come out here we get a lot of support,” Ellison said.

She said this event is good for the dogs socially because they get to see what it is like having a family who takes them out on hikes.

“This year we have NCCC AmeriCorps that is here, and they’re here from all over the United States that have been helping me in the park,” Randolph-Bollinger said. “They came today, and it’s a good opportunity for them as well.”

“Why we’re here is simply because it’s a service learning opportunity,” Hipp said. “This is something we want to do because there’s so many valuable resources and people here.”

Hipp said their group didn’t have to do this, but they wanted to because they worked with dogs.

“This event benefits the dogs because it gives them exercise and potentially a future home,” Randolph-Bollinger said. “It’s a win-win situation for both the volunteers and the dogs.”

Since it is such a popular program, there will be another “Hike with a Homeless Dog,” in September, and people can find information on Illinois department of natural resources website for Giant City.

“I would say sign up as soon as possible, we already have people calling for September,” Randolph-Bollinger said. “The sooner the better.”