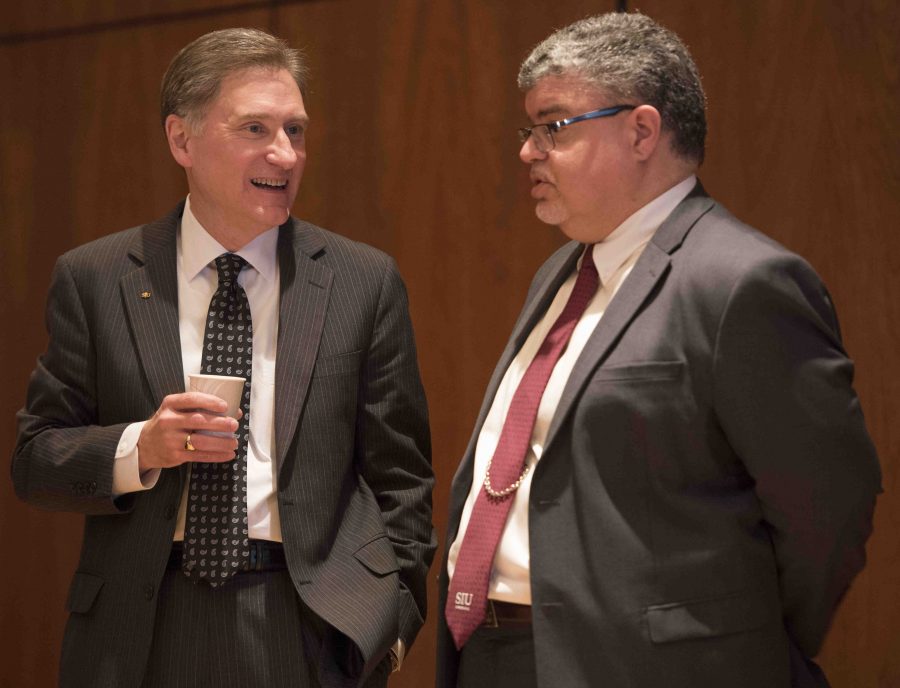 SIU President Randy Dunn speaks to interim Chancellor Brad Colwell on Thursday, April 6, 2017, during a recess of the SIU Board of Trustees meeting in the Student Center ballrooms. (Bill Lukitsch | @lukitsbill)

By Brian Munoz, Editor in Chief

Former SIU President Randy J. Dunn improperly hired late Chancellor Carlo Montemagno’s daughter and son-in-law as well as SIU’s vice president for academic affairs, according to an Illinois Office of the Executive Inspector General report, the findings of which were obtained by the Daily Egyptian.

Dunn entered a separation agreement with the Board of Trustees last July after it was discovered he coordinated with SIU Edwardsville administrators and legislators in an attempt to dissolve the university system.

The agreement stated Dunn would be entitled to a visiting professor position at SIUE for at least 18 months unless an external agency made a finding of his wrongdoing.

The agreement also stated Dunn’s employment would cease immediately and automatically upon the issuance of any findings showing he violated SIU System or Illinois policy.

The Office of the Executive Inspector General recommended Dunn not be rehired within the SIU system due to the violation of his contract.

Doug Mcllhaga, SIU Edwardsville spokesman, announced Dunn would not teach at the Edwardsville campus this semester early January, but would not comment on the reason why.

The investigation found Dunn improperly negotiated with and hired Melissa and Jeffrey Germain.

Melissa Germain made $52,000 annually during her time at the university, where she promoted the theater department as a staff member in university communications.

Both Germains no longer work at the university, according to the 2018-2019 university salary database.

The university was found to have violated hiring procedures by not maintaining an acceptable candidate list for extra help appointments, according to the report.

Furthermore, Dunn was found to have violated hiring procedures when hiring former interim Chancellor Brad Colwell as the system’s latest vice president for academic affairs – a position that had been vacant for four years. He is paid roughly $232,000 per year and was appointed to his position in 2017.

The office also recommended all pertinent employees complete training on extra help appointments and on administrative or professional position hiring procedures — including how to conduct position searches and the appropriate use of search waivers.

The office further recommended the system consider implementing a review system for administrative or professional hires, in order to avoid issues regarding improper use of search waivers.

The report, a portion of which was obtained by the Daily Egyptian, said Dunn bypassed search processes by signing his own search waiver request forms. The investigators suggested the board implement rules curbing the president’s ability to do so.

Dunn said he decided to pass the inquiries on to the state, in order to ensure an independent review, according to a February 2018 press release.

The OEIG report contains other findings, whose meaning is unclear as the Daily Egyptian has obtained only a portion of the report and is continuing to look into the matter.

Randy Dunn could not be reached for comment; his previous phone number has been disconnected.

Rae Goldsmith, SIUC spokeswoman, said she had not seen the report and could not comment on the matter.

The SIU Office of the President did not return phone calls with comment.

The Office of the Executive Inspector General declined to comment on the investigation, citing official policy in which they cannot disclose the existence of a case.

This is a developing story and will be updated as more information becomes available.

Brian Munoz, Editor in Chief, can be reached by email at [email protected] and on Twitter at @BrianMMunoz.