Playoffs in doubt for Salukis after loss 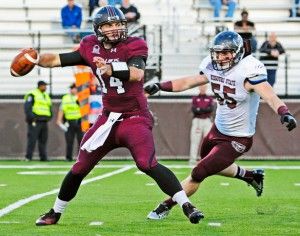 The SIU football team walked off the field and into the locker room following Saturday’s loss, knowing that their playoff chances are likely shattered.

The Salukis (5-5, 3-3 Missouri Valley Football Conference) built a 14-0 first quarter lead and all signs were looking up. However, Missouri State University (5-6, 5-2 MVFC) outscored the Salukis 24-3 the rest of the half to take a 24-17 advantage and maintained the lead for the 37-27 road win.

Senior receiver John Lantz set a career-high with 139 receiving yards and also threw a touchdown pass in the loss.

Lantz said knowing that what they worked so hard to achieve may now be out of reach is a tough pill to swallow.

“Right after the game when the clock hit zero, we knew we were out of the playoffs,” Lantz said. “As a senior it’s hard for me because I wanted it bad. I know the team wanted it bad because we worked hard for it all year.”

There were times in the game when players pressed to make big plays, but cost the Salukis valuable field position.

“In the locker room, you express your disappointment, but at the same time our guys, they are heartbroken right now,” Lennon said. “It’s not a situation where anybody wanted to fail out there. It was probably wanting something too much and just playing out of character from what you would normally do.”

On fourth down with just under six minutes left to play and the Bears up 31-27, SIU ran a fake punt to try to keep the drive alive with hopes of taking the lead. Senior punter Austin Pucylowski nearly completed a pass to junior linebacker Tyler Williamson, but the Bear’s Jeremiah Plowden broke up the pass.

Missouri State Coach Terry Allen said with the Salukis’ play calling early in the game, his team knew to expect some trickery on that play.

“(SIU) came out with trick plays in the beginning of the game, and you knew they were probably going to try something,” Allen said. “But it was a nice job by Plowden there. We reacted to it.”

Key factors in the Salukis’ loss were the big plays given up by the defense. The Bears executed three plays that gained 40 yards or more. Two of those plays came in the second quarter.

“It just comes down to fundamental football; blocking, tackling and doing assignments so you’re in position not to give up big plays,” Lennon said. “We gave up way too many big plays and easy scores.”

SIU’s defense allowed 510 yards of total offense, their second-highest total of the season. The Bears were also helped in the second half by a few costly penalties and missed tackles.

Williamson said the defense needed to be better disciplined.

“We just beat ourselves,” Williamson said. “We didn’t make the plays we needed to make and at the time didn’t put ourselves in position to make the plays. Mental mistakes will cost you.”

Lennon said his team needed to be better fundamentally to beat a playoff-caliber team like Missouri State.

“I was disappointed with our fundamentals,” Lennon said. “The things we are normally good at we failed at, especially defensively. We have to be better than what we were that first half. Anytime you give up 348 yards in a half there are some problems.”

SIU will play its final home game of the season Saturday against Illinois State University during senior day at Saluki Stadium.

Terrance Peacock can be reached to [email protected]