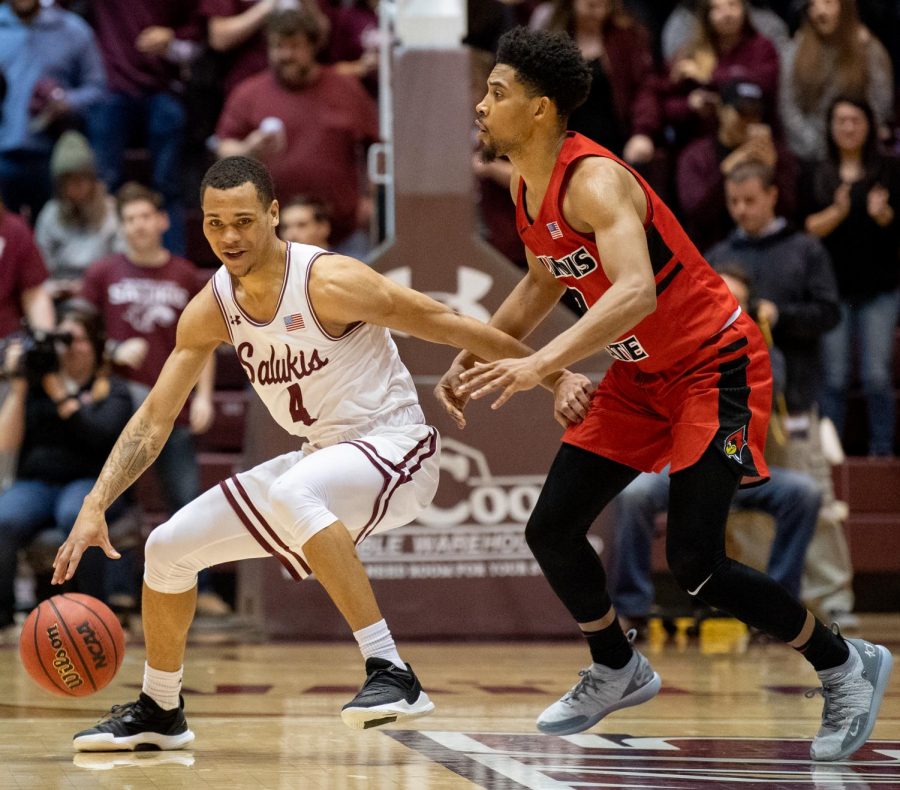 Southern’s defense played big in the final three minutes holding Illinois State to four points as the Salukis went on a 13-3 run to close out a 72-63 win on senior night.

This game was the last home game of the season – marking this year’s senior night. The group was honored before the start of the game.

“These guys turned this program around headed in the right direction,” Barry Hinson, Saluki Head Coach, said.”I couldn’t be a prouder father, coach, mentor than I am of these six seniors and their contribution they have made to Saluki basketball.”

The game was big on where Southern would end up playing during the conference tournament, with a win guarantee the Salukis would not play during the opening night of the tournament.

For the first two minutes of the game both Illinois State and Southern answered buckets back and forth with senior center Kavion Pippen scoring first as the Salukis led 6-4.

A three-pointer by Sean Lloyd Jr. pushed the lead out to as many as five but the Redbirds answered back and eventually had a short-lived one point lead until Fletcher made a layup to pull back out to a 13-12 lead.

Illinois State answered back with a three-pointer by senior guard Keyshawn Evans and a mid range jumper to push out a six point lead with 11:18 left in the game.

Junior guard Eric McGill drove to the basket and passed it to Fletcher who made the dunk as SIU trailed 19-15.

SIU was able to pull briefly ahead by one point with a wide open three-pointer by McGill but the Redbirds answered with a three of their own to pull back out to a 22-20 lead.

Southern went on a 6-0 run which was enunciated with a dunk by Pippen to take a one point lead but Evans answered for Illinois State as they led 27-26 with 3:08 left in the first half.

Fletcher was fouled on his layup attempt and he made one of his two free throws to knot the game up at 27-27.

Pippen made a jumper and Fletcher made a layup in which he was fouled and missed his fourth free throw of the day as SIU led 31-27. Pippen finished the game with a double-double with 17 points and grabbing ten points.

Fletcher attempted a three-pointer with hands in his face as SIU led 31-29 heading into halftime.

Illinois State got the ball to start the second half in which senior forward Phil Fayne opened the scoring with a jumper to tie the game, but Pippen answered with a tip-in off of junior guard Aaron Cook’s missed jumper to keep it at 33-33.

McGill layed it off the backboard for a dunk by Cook to pull within three but two three pointers by Illinois State pushed their lead out to nine.

Southern’s defense started to pick it up as they held Illinois State scoreless for over a minute coming back within four after a dunk by Pippen and a layup by Lloyd.

Fletcher attacked the basket with SIU down four and made his layup and he made his free throw to pull the Salukis within one at 48-47.

Both teams traded one point leads back and forth on four consecutive possessions after a Fayne layup pushed Illinois State back out to a 59-58 lead with 3:57 left in the game.

Pippen fouled Fayne and he made both of his free throws to give the Redbirds a two point lead but a three-pointer by Lloyd allowed for Southern to retake a one point lead.

Fayne finished the game with 21 points to pace the Redbirds as well as grabbing two rebounds.

After the Lloyd three-pointer Pippen blocked Fayne and Fletcher added a three-pointer to push the SIU lead out to 65-61 with 2:29 left in the game. Fletcher finished the game with the team lead in points with 26 and grabbed nine rebounds.

Fletcher made another three-pointer and McGill added two made free throws as the Salukis pushed out to a nine point lead with one minute remaining.

Lloyd really thought the two consecutive threes by Fletcher were huge for Southern near the end of the game.

“Real big, I think both of them were daggers, I [had] seen it in their face they all quit after he hit the second one,” Lloyd said.

Fletcher added two more free throws to push out to an 11 point lead, Illinois State made a layup for their final score as SIU won 72-63.

“Now I can celebrate Senior Day, enjoy my family and spend the rest of the day with my teammates,” Fletcher said.

SIU will be back in action during this year’s edition of Arch Madness at the Enterprise Center in St. Louis, Missouri. Southern will learn who they face at the end of tonight’s matchups.