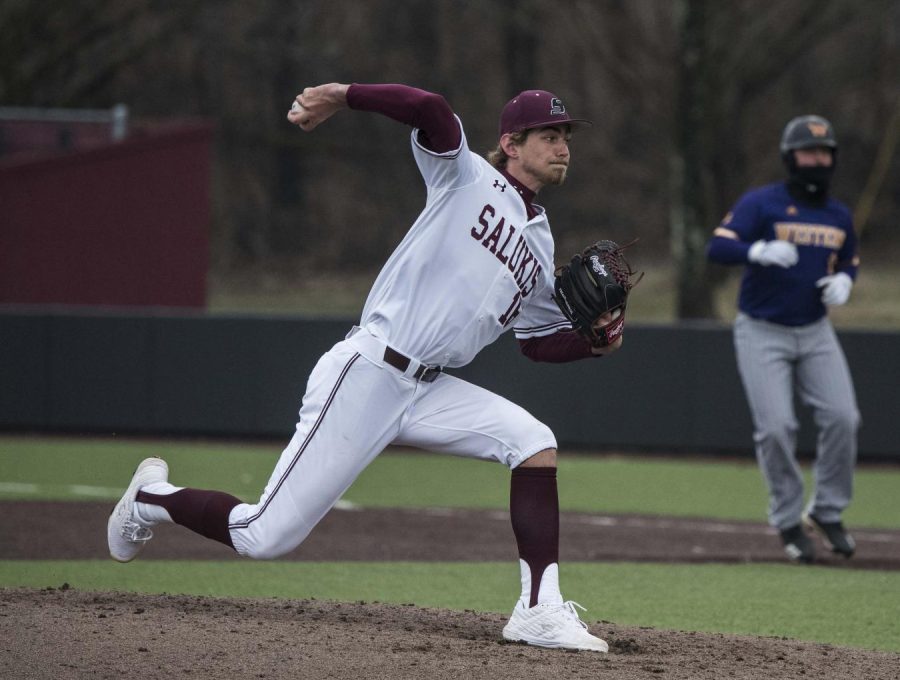 Saluki pitcher Matthew Steidl pitches the ball to the Western Illinois Leathernecks in the ninth inning on Friday, March 1, 2019 during the Salukis' 8-1 win against Western Illinois.

Southern took two in their home opener doubleheader against the Western Illinois Leathernecks at Itchy Jones Stadium on Friday. The weekend series was intended to be a three-game series spread across the weekend, but weather turned the series into a Friday doubleheader and a third game on Saturday.

Junior pitcher Brad Harrison was on the mound for the Dawgs and in his first inning of work as he set the Leathernecks (2-6) batters down in order with a flyout and two groundouts.

After Harrison set down the side in his first half inning, senior infielder poked an infield single to the shortshop, then senior outfielder Will Larue singled to right field.

A double steal by Larue and Vasic and an error by the Western second baseman brought home Vasic for the first run of the game.

A sacrifice groundout to the second baseman by junior infielder Ian Walters brought Archer home from third to push the Southern lead out to 2-0 after one inning.

Southern (5-3) added four more runs in the second inning after Harrison set down all three batters he faced in the first half of the inning.

Three of the four runs by SIU in their half of the second inning came off of a triple into right field by Larue.

Western got their first hit off of Harrison in the fifth and had runners on second and third with an error by junior outfielder Addison Fugitt, but Harrison then struck out two straight as the Salukis lead 6-0 heading into the bottom of the fifth inning.

After five innings of zeroes, the Salukis tacked on two more runs in the bottom of the eighth inning after two consecutive walks and an error by the Leathernecks second baseman loaded the bases sophomore infielder JT Weber poked a single through the right side brought home two.

Harrison came out of the game after throwing 88 pitches giving up three hits and eight strikeouts, freshman pitcher Matthew Steidl came in to pitch the ninth to replace Harrison.

” I felt really good today, didn’t really have a great outing on Sunday,” Harrison said.”I was able to attack the zone get ahead of guys and kind of force their hand a little bit.”

Steidl gave up a walk, a hit by pitch and a single to open the ninth, but retired three out of his next four hitters giving up one run as SIU won the first game of the doubleheader 8-1.

Sophomore pitcher Blake Begner was on the mound for Southern to start game two of the doubleheader.

Begner made quick work of the Leathernecks in the first inning  getting one batter to ground out and one to fly out to center and he also added a strikeout.

In the Salukis half of the first inning LaRue singled and stole second base and advanced to third on a passed ball, but senior outfielder Alex Lyon struck out looking to end the inning.

SIU broke through for a run in the fifth inning off an infielders choice where Ulick scored after he tripled to begin the inning, Larue added a two run homerun as the Dawgs led 3-0 after the fifth inning.

Larue finished the day going four for eight at the plate and having five runs batted in.

“I saw the ball well the whole game, just go up there and stick to my approach and good things happen,”LaRue said.

The Dawgs caught a Leatherneck runner stealing in the sixth inning, but one run scored on the same play as Southern led 3-1.

Freshman pitcher Sam Grace replaced Begner in the eighth inning after Begner gave up one run with four strikeouts to go along with three hits.

Sophomore pitcher Trey McDaniel entered in the ninth inning to close out the game as the Salukis led 6-1 as he shut the door ending the game with a strikeout.

Coach Henderson was impressed by the length of both his starters today in Harrison and Begner.

“When you watch two guys go 15 innings that’s where it all starts,” head coach Ken Henderson said,”those guys were both pretty special today.”

SIU will be back in action tomorrow against Western Illinois to close out the three game series, first pitch is set for 1pm at Itchy Jones Stadium.