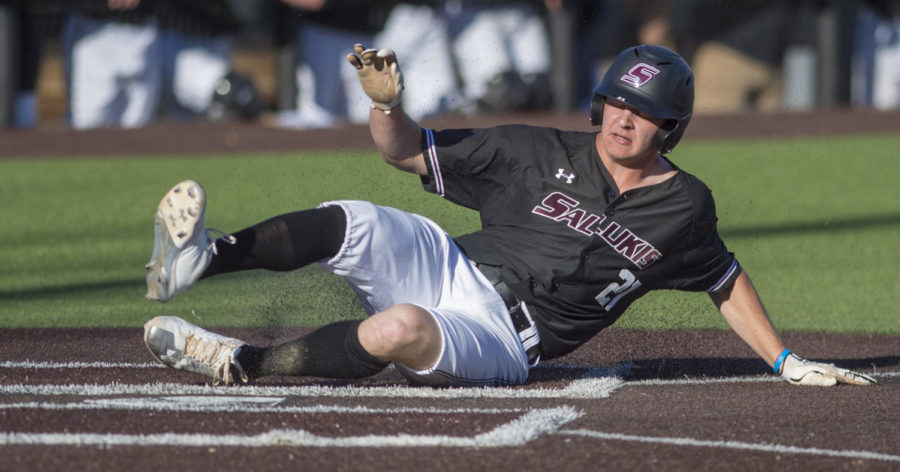 Southern split the series against Memphis this weekend after rain shortened what was supposed to be a three game series into two.

The three pitchers from Memphis (2-4), senior Hunter Smith, junior Takoda Metoxen and senior Alex Smith then held the Salukis scoreless the rest of the game.

Junior Brad Harrison started the game for Southern, and he gave up three runs on seven hits striking out six across five innings, sophomore Blake Begner replaced Harrison and he gave up four more runs across two innings as Southern fell in the first game 7-2.

In the second game of the day, three straight hits, led by Archer turned into a 2-0 advantage for SIU in the second inning.

Junior Dylan Givens earned the start in the second game, and while the Saluki offense was held in check he held the Tigers in check allowing five hits no earned runs and one walk across eight innings of work.

The lone run given up by Givens came in the sixth inning when the leadoff hitter for Memphis made it to third on an outfield throwing error. He was later brought home with a sacrifice fly to center field.

After Givens made it through the sixth inning he pitched through the eighth with Southern (2-3) leading 2-1, sophomore Trey McDaniel came in to replace Givens.

McDaniel walked the first batter he faced but he then retired the next three batters he faced to seal the victory for SIU and collected his second save on the season.

Southern will be back in action Wednesday against Belmont with first pitch set for 4 p.m.