Volleyball comes together at right time 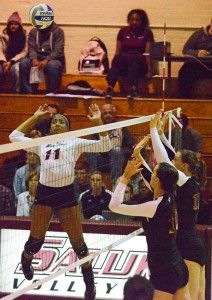 More than 500 fans packed Davies Gymnasium Friday night as the Salukis won their fourth straight match in a sweep of the University of Evansville.

“It was the best crowd since I’ve been a Saluki,” Coach Justin Ingram said. “I was amazed by the student support because they were rock solid all night. They got that energy going and we fed from it.”

The Purple Aces came to SIU without any hope of making the Missouri Valley Conference tournament while the Salukis are in prime position to make a run.

A sluggish start from the Salukis had them trailing 19-11 until they were able to serve and freshman setter Hannah Kaminsky stepped up to the line.

Kaminsky served six straight points to close the gap and helped set up a rally to end the set.

“We always talk about putting it on them and we’re a serving team. As a team we get a lot of aces; we put people out of their system,” Kaminsky said. “I was just focusing on hitting the zone coach was giving me.”

The Salukis ended the first set on a 14-3 run to win the opening game 25-22. Evansville kept the second set close until Kaminsky reeled off four straight serves that earned points. SIU took the second set 25-18.

SIU controlled the third set and was able to get the sweep with a 25-16 win in the final game. Junior defensive specialist Alex Rivera helped add key serves in the set which was the highlight of the match for the Salukis.

Freshman setter Meg Viggars has been all over the court for the Salukis this season, whether it is getting kills, digs or setting up teammates.

Viggars said she needed to minimize her mistakes, but was happy with the result of the game.

“I think I made too many errors, but it was a good game for me personally,” Viggars said. “I just go out and play, to be honest; I love playing.”

The Salukis had a sideout percentage of 34 percent in the opening set which is well below their average.

“First set was a pretty odd set. When you see sideout efficiencies that are that low, that means people are sitting back there on their serve for quite a long time,” Ingram said.

SIU has only three seniors on its roster this season and they have all stepped up at different times.

Ingram said the three seniors each bring different things on and off the court.

“It’s their team,” Ingram said. “They’ve worked at it since last spring and developed all year.”

The Salukis are guaranteed a spot in the MVC Tournament Nov. 28 through Nov. 30 in Wichita, Kan., hosted at Wichita State University. The top six teams in the standings will enter the tournament, but the top five teams are already locked in.

Illinois State University is one of those teams that will head to Kansas at the end of the month. On Friday, the Redbirds come into Carbondale with a record of 10-6 in the MVC. The Salukis welcome Indiana State University Saturday in the final game of the regular season.

Tyler Dixon can be reached at