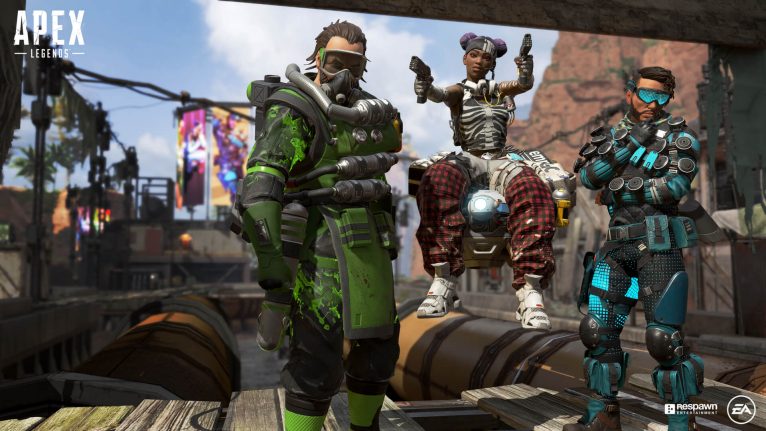 Unless you have $20 to spend, two of these characters are going to take hours to unlock.

Respawn Entertainment’s latest game, the free-to-play battle royale Apex Legends, has been the new kid on the block for all of February. With all its improvements to the inherently chance-based monetization of loot boxes, the grind is still manipulative and scummy.

There are genuine strides forward in loot box design which do not make me feel like I’m inserting my debit card into the PS4 and have shards spit out. No duplicate items and openly displayed statistics for your chances in each drop are way better than Overwatch’s current model.

Let me be clear: Apex Legends is freaking fun, and I recommend you at least try it. This column is about the negatives to Respawn’s monetization of the game, which still feel like Respawn wanting to stick a cattle prod up my ass until I cough up dollars.

While you can’t get the “Midnight” skin for the RE-45 twice, you can be stuck unlocking it for five other guns. Also, the “Midnight” skin is just painting the entire gun black, which doesn’t feel like a unique skin you should be crossing my fingers for.

They know you want epic/legendary skins, but you also have to unlock “epic” poses for your banner. These are weak cosmetics devalue the meaning of “epic” items–Bloodhound looking at their knife for a two-second animation is not epic, Respawn.

Each rank up gets you 600 Legend Tokens (more on these duds later) and an Apex Pack. Except, at around rank 20, you stop getting an Apex Pack every rank. Now it’s every other rank up. Respawn has said between rank 1 and 100 a player will get 45 free Apex Packs.

Since it takes longer with each subsequent time to rank up, this feels made to pressure players who’ve dedicated dozens of hours into buying Apex Packs because they haven’t gotten the reward as much any more.

It’s like an alcoholic developed an immunity to booze, so they need to switch to something harder like absinthe. Even then, because Apex Packs can have aforementioned garbage rewards, sometimes they just stay sober and depressed holding the empty bottle.

Crafting Materials are mislabeled and undervalued

There’s absolutely no crafting elements in Apex Legends. The crafting materials in Apex are just money you get solely from Apex Packs to buy the items you want outright instead of taking a chance on the Packs.

Except, getting “rare” crafting materials only gets you 30 parts. Whereas a “rare” skin from a Apex Pack, if you wanted to use crafting materials to buy it, costs 60 parts. So, when they say you have a 100 percent chance to get a rare item in every pack, you actually could get something the game itself literally values as half as good.

Legend Tokens are near pointless

Legend Tokens help you unlock two characters, Caustic and Mirage. Because you get a steady addition of 600 tokens every rank up with no other way to get tokens, it takes until rank 23 to get one of these.

Rank 23 takes a long time to reach alone. When your ranks take longer as they get higher, getting to rank 46 for your second character will take at least over 25 hours.

This requirement is stupid–remember when we all hated it in DICE’s Star Wars Battlefront II to unlock Darth Vader? It’s the same crap then and now. What makes it more frustrating is after you’ve got both Mirage and Caustic, they’re basically pointless.

There is one other dumb way to use them in the Featured Store to buy weapon skins, but you need to spend over $10 on a separate skin you’re not even asking for.

I love Apex Legends, but with the innovative leaps beyond Fortnite and PlayerUnknown’s Battlegrounds in gameplay, the pressure to spend real money feels worse than the monetization models in its competitors put together.

You’re Dumb and Wrong is a weekly column about video games, movies and popular entertainment from Arts & Entertainment editor Jeremy Brown. Brown can be reached at [email protected]