The Daily Egyptian • May 2, 2016 • https://dailyegyptian.com/917/news/missouri-lawmakers-want-to-loosen-gun-laws-while-illinois-legislators-seek-to-tighten-them/ 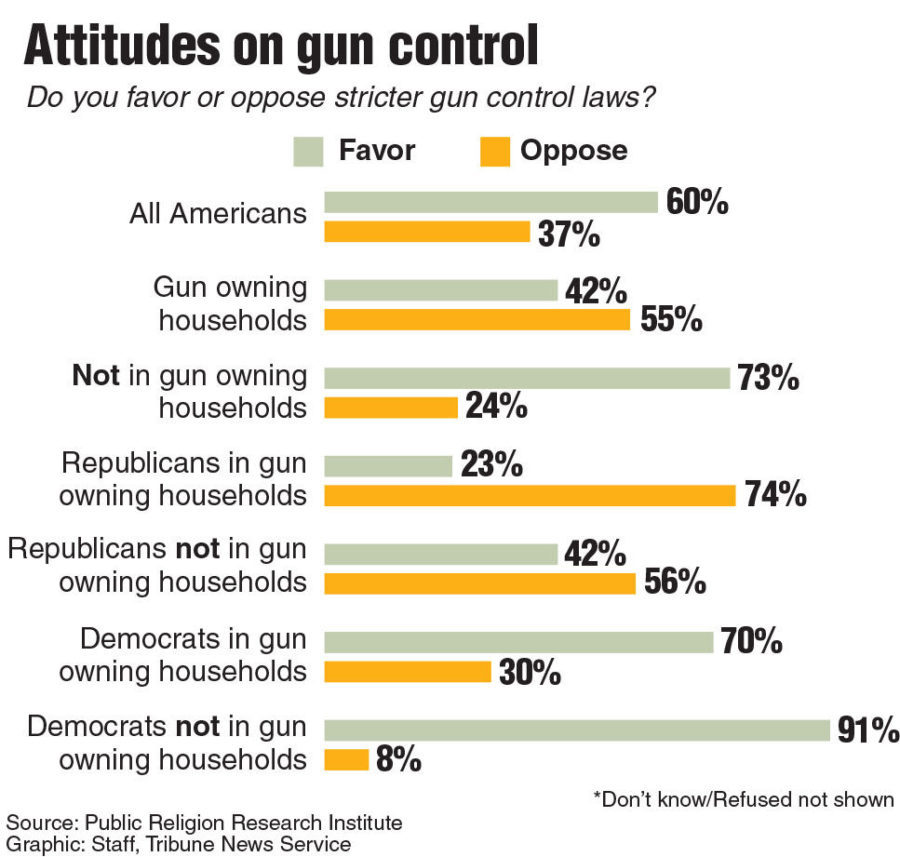 Although Missouri is already ranked as a top-10 lenient state for gun owners, lawmakers are moving closer to further loosening the state’s firearms laws.

As the legislative session enters its final two weeks, the House and Senate are considering making it legal for people to carry concealed weapons without a permit anywhere they now can carry guns openly.

And, the Republican-led majorities also are considering an expansion of Missouri’s self-defense laws by allowing a person to use deadly force in public places if they believe a reasonable threat exists.

The two proposals are the front-runners among a handful of gun bills to make it across the finish line before the Legislature adjourns on May 13. Other firearms legislation appears mostly stalled, including initiatives to allow firearms on college campuses and public transportation.

It is not clear where Democratic Gov. Jay Nixon stands on the proposals. Earlier in the session, Nixon said he was opposed to a bill that would allow guns on college campuses, saying, “Gunfights on the quadrangle will not solve problems.”

His office said Friday that the governor was not going to comment on the two bills.

In July, Guns and Ammo magazine ranked Missouri as No. 9 among the 50 states and the District of Columbia in terms of laws friendly to firearms owners. Tops in the nation was Arizona, which has permitless and permitted carry and “strong self-defense laws,” the magazine noted.

In contrast, President Barack Obama singled out Missouri this year when he cited a 2014 study that found Missouri’s gun homicide rate increased by 14 percent after lawmakers in 2007 removed a requirement that all handgun buyers obtain a license verifying they had passed a background check.

In a sometimes testy debate on the Senate floor last week, Sen. Jason Holsman, D-Kansas City, questioned whether the state should enact a “stand your ground” law. The proposal would expand Missouri’s “castle doctrine,” which allows a person to use deadly force to defend themselves at home or on their property.

House guests, such as a baby sitter, also would be covered if an intruder entered a home.

Holsman said there are other options besides using a gun when feeling threatened.

“Diplomacy with somebody that’s pointing a gun at you or your kids in a dark alley as you walk to your car? You want to rely on diplomacy?” asked Schaefer, who is a candidate for attorney general.

Becky Morgan, leader of the Missouri chapter of Moms Demand Action, said the proposal, which was adopted as part of an amendment to a larger crime package, would turn conflicts into deadly encounters.

“Do not be misled: Stand Your Ground laws do not deter crime, they make everyday situations more dangerous by allowing people to shoot first and ask questions later,” Morgan said in a statement.

Rep. Eric Burlison, R-Springfield, meanwhile, contends his plan to make Missouri a so-called “open carry” state will help people who don’t have enough money or time to go through the standard permitting process.

“Simply to say that you cannot defend yourself unless you pay expensive fees and take a course is not in my opinion appropriate,” Burlison said.

He said the move, if adopted, will not make Missouri less safe.

“I think we do it in a responsible way. We aren’t letting citizens carry in a place where they can’t carry today,” Burlison said.

The first-time application fee for a concealed carry permit is $100. Training classes, which are required, typically cost between $60 and $130.

The Missouri bills run counter to measures being considered in the Illinois Legislature, where lawmakers may strengthen the state’s ability to keep guns out of the hands of people who are mentally ill or pose a danger.

Some of the Democrat-sponsored plans would remove a person’s right to hold a Firearm Owners Identification card, which is necessary to buy a gun in Illinois, if the individual has an order of protection against him or her or if a family member successfully petitions a court. Another plan would require better reporting of cases in which a judge has deemed someone mentally disabled.

Each measure tightens a loophole in existing law, which some lawmakers said could prevent more gun deaths and keep potentially dangerous people from possessing firearms. But some gun rights advocates say a couple of the plans are too severe and that stricter gun laws disregard the rights of responsible gun owners.

In Missouri, the president of the state’s Fraternal Order of Police said the organization is strongly opposed to both measures pending in Jefferson City. In particular, St. Louis Police Department Sgt. Kevin Ahlbrand said the permitless carry proposal was “irresponsible.”

“People need to have training. Allowing anybody to carry is ludicrous,” Ahlbrand said.

He added that the police group also is hopeful the “stand your ground” legislation is quashed.

“I think it would hurt us, especially in urban areas,” Ahlbrand said.