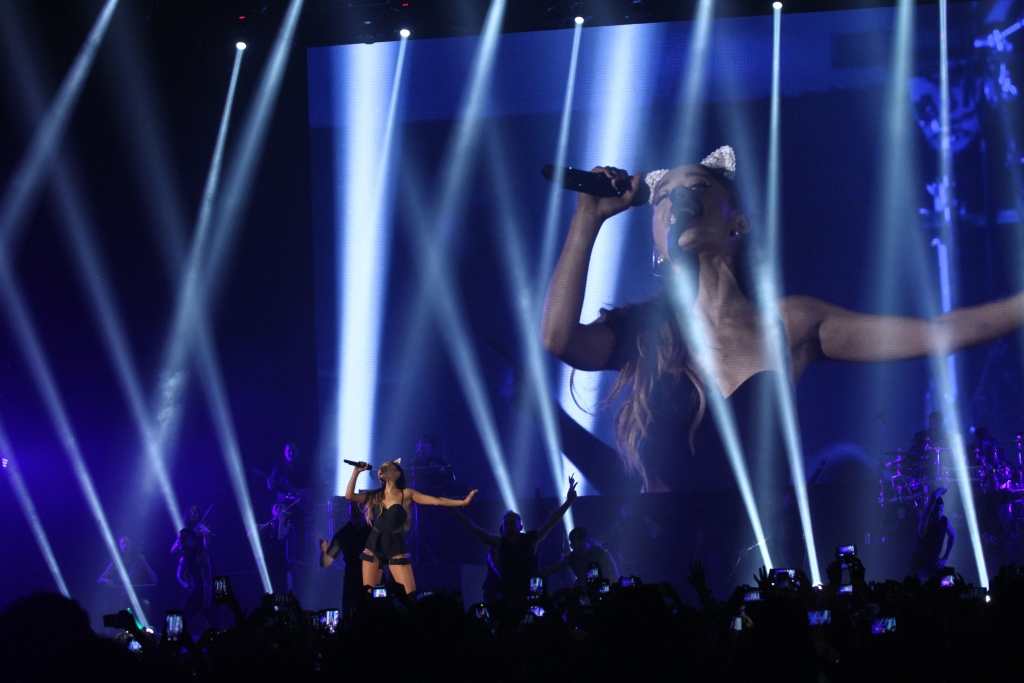 Ariana Grande performed in Jakarta in 2015 for her Honeymoon Tour.

Ariana Grande, whose personal life has been under close watch since the release of her last album, “Sweetener”, debuts a more personal side with her fifth studio album “thank u, next” – her second new album in less than six months.

“thank u, next” tells a complete story from beginning to end focused on love, heartbreak and growth invites the world into her life and feelings.

Each track focuses on a different aspect of a relationship and her own participation in her love life and in the world as a whole in a way Grande has never done before.

The album is easily her best, showing lyrical growth and production value unlike anything any other pop artist could pull off. In what proved to be a nearly impossible task, I decided to rank each track on the album based on lyrical content, production and overall appeal.

12. bad idea: The beat feels uninspired with this track, which is easily one of the more heavily produced songs on the album. The song focuses on finding someone random and running away with them. The lyrics also don’t resonate well and Ariana’s vocals don’t get much of a chance to shine, save for the final chorus. The interlude at the end is great but the rest of the song makes it hard to get to the point in the song. I never thought I’d be one to say this, but perhaps throwing another artist onto this track for a verse could have helped it reach the full potential the song clearly shows it has.

11. make up: This song is forgettable for me. Focusing on dealing with the ups and downs of a relationship, this track comes right before the emotional epicenter of the album. The track seems to scream “ignorance is bliss” throughout by showcasing Grande’s love of making up with her lover after a fight. The lyrical content and production value work well but the track doesn’t seem to inspire to be anything more than it is. It leaves everything on the table in a way other songs on the album don’t and unfortunately works against this song.

10. thank u, next: Maybe it’s because of the mass exposure this song received but it doesn’t hit the same way it used to. This isn’t to say it’s a bad song, just easily one of the weakest on this album. That says a lot because “thank u, next” is one of Ariana’s quintessential songs, focusing on moving on and self love more than any other track she has done. Still, the lyrical content and production value is easily the weakest on the album but the message still holds strong, especially with its placement right near the bottom of the album.

9. bloodline: Arguably the most pop sounding song on the album, “bloodline” focuses on finding someone and having a good time with them without wanting commitment. It’s a great radio hit and, if the album has the legs it seems to, it will be huge this summer. The song is reminiscent of “sweetener” in so many ways but it still works very well for this album. Still, it doesn’t have the weight other tracks on the album do. It sounds like an “Ariana Grande song” – in this case, puts it near the bottom of the pack despite being a certifiable pop hit.

8. 7 rings: The rich cousin of “thank u, next”, “7 rings” is an incredibly strong track and one of her best singles. So why is it so low? Frankly, it doesn’t help the rest of the album. This song lacks the emotional weight other songs on the album have and in an album relies heavily on emotions, it kind of drags the track down. Ariana spitting bars will never get old and the production is heavy and amazing. Compared to the other tracks on the album, it doesn’t hold water.

7. imagine: The strongest of the pre-album release tracks, “imagine” starts out the album with haunting production and strong lyrical content. Grande wishes for love is far from the limelight but realizes this love is unattainable for her. Many believe this track to be about Mac Miller, Grande’s ex who died last September. It’s beautiful without understanding the real life correlation but having an understanding of Grande’s life is what makes this album work so well and this track is proof Grande has range as an artist in so many ways.

6. ghostin: Ariana Grande has always been good at creating emotionally charged tracks. After all, she is the “girl with a whole lot of baggage.” Her haunting vocals on the track sound ghostly and the production, filled with strings and minimal electronic sound, make this song stand out above the rest as the emotional core of the album. It’s one of her most personal and emotional tracks and it showcases Ariana’s true capability as an emotional artist.

5. NASA: This song is a grower. It started out near the bottom of the album for me but it slowly made its way onto my favorite list on the album. The production is slick and Ariana’s vocals are strong, but restrained. This would be a perfect choice for a single later down the line. Independence and space are both showcased in the lyrics, allowing the celestial sounds make up the track to blend well and create a true experience when listening makes you want to cancel all your plans and dance by yourself all night. My only critique would be I still wish there was a more prevalent bass line in the chorus.

4. break up with your girlfriend, i’m bored: Talk about a certifiable bop. Based on the title, it seemed like the song would be trying to ride a fine line between being funny and being snarky. Instead, what we get is a cool 90s pop/rhythm and blues closer for the album perfectly shows us exactly where Ariana is going from here: changed, confident, powerful and ready for the world. It feels like a self-confidence track wrapped up in a perfect package all but forces you out of your seat. It’s the most fun track on the album and it’s probably one of the songs I’ve listened to most from the album.

3. fake smile: From the moment the song starts with a sample of “After Laughter” by Wendy Rene, you get a perfect feel for where the track will go. Focusing on dealing with the pressures of appearing happy all the time, Ariana gives a full anthem for anyone who is tired of having to act like everything is fine. The production on the track changes multiple times and the lyrical content is incredibly strong and relatable. This song feels like Ariana Grande covering Paramore, exuding joy and sadness while never allowing the upbeat rhythm to be taken over by the sadness lies at the heart of the song.

2. needy: A true gut punch of a record, “needy” shows a side of Ariana we haven’t gotten to see. It’s full of apology for loving someone – sometimes in ways someone could never possibly fulfill. The haunting and simple production never overpower the incredibly strong lyrics allow this song to ascend above the other “slow” songs on the album. It gives us a look into who Ariana truly is beyond the fame and the material substances and allows for the simple theme of loving someone, often too much at times, to rise above everything else exists in the song.

1. in my head: The crown jewel of the album. This track begins with a voice memo which perfectly sets up this emotionally charged record. The production is strong and steady, accompanied by some of Grande’s best and most powerful lyrics centered on understanding people are not what we perceive them to be. Opening with a voice recording tells us exactly what to expect, the first verse speaks to discovering someone is bad for you despite everything you thought. The post chorus contains easily her strongest lyrics center on realizing the person you loved is someone you created in your head. It’s the perfect anthem for this generation obsessed with appearing as someone you aren’t truly. If there’s one thing this song accomplishes, it shows we need to try and see people for who they really are instead of who we want them to be.

Arts & Entertainment columnist Kyler Guebert can be reached at [email protected] or on Twitter at @kguebert88.