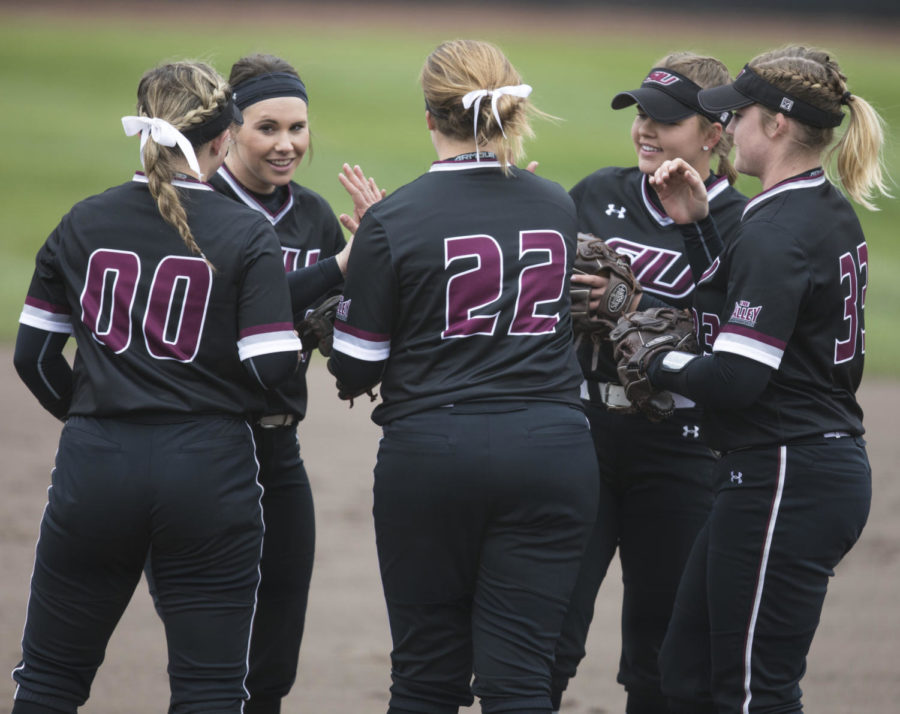 SIU Softball members give each other encouragement before the start of the game Sunday, March 25, 2018, during the Blackout Cancer game, where the Salukis took a 6-3 win against Illinois State University, at Charlotte West Stadium. (Corrin Hunt | @CorrinIHunt)

After the tournament, Southern is on a seven game win streak and has achieved several milestones within the program.

These milestones include the team’s first time knocking off a ranked opponent since 2013 and sophomore Katelyn Massa becoming the fifth Saluki catcher in program history to earn All-MVC First Team honors and the second to do so in the last 20 years.

Massa was also just named MVC Player of the Week for her performance in last week’s matchups.

Senior pitcher Briana Jones lead the Saluki charge in this game only allowing one run on five single hits for the game. Prior to the game, the Bulldogs averaged six runs and nearly eight hits a game.

This victory gave the senior her seventh win and moved her up to number three on the SIU All-Time Wins list.

Southern’s defense was the noteworthy highlight of the game making several gritty plays to put outs on the board.

These plays include a diving catch into foul territory by freshman Sidney Sikes, a run down ball in centerfield by junior Susie Baranski and freshman Ashley Wood combining with junior Maddy Vermejan turning a 4-6-3 double play.

“I thought Bri threw extremely well,” said Kerri Blaylock, Southern Illinois head coach . “The strikeout of Mia Davidson to start the game set the tone. I also thought we came up with a couple of exceptional defensive plays. We turned a double play with Maddy and Woody, Sidney Sikes played great and Susie Baranski had a great catch on a ball that was lost in the sun.”

Massa and Wood led the way for SIU at the batting plate as both went two for three on the game. Wood notched an RBI double and one run scored, while Massa tallied two RBI’s and one home run.

The score was tied in the third inning of the game and remained that way until the Dawgs caught fire in the sixth inning.

Massa lit the fuse hitting her first solo homer of the season against the nationally ERA ranked Mississippi pitchers. The next runs in the sixth came from Wood and Jones on a double and two walks.

The Bulldogs were held to just a single run for the rest of the game and SIU clenched the win at 4-1.

The win marked Blaylock’s 19th career win over a Top-25 foe. This win was SIU’s first win over a SEC opponent since 2011.

“What we talked about is that we need to play consistently this way, that this is not a one time thing,” Blaylock said. “We need to keep playing consistent no matter if we are playing the 25th-ranked team in the country or whoever we are playing.”

In this game the women achieved a season high of 11 hits. Pitchers Briana Jones and Claire Miller combined for an allowance of just two hits and no runs.

The Dawgs scored in four of the six innings they played, tally one run in the second, one in the fifth, one in the sixth and scoring three in the fourth.

Sophomore Jenny Jansen notched her second multi-hit game of the season going 2-for-4 with a stolen base and a RBI-double.

The bottom of the fourth inning proved to be the best for SIU as they scored three runs. Baranski hit a double to send her teammate Vermejan home.

The next run in the fourth came on an RBI from Jansen to send another Saluki to home plate. Jansen later crossed home herself after senior Jordan Spicer hit a single.

The Bears hit a small surge in the fifth inning as a walk gave them two-on with no outs. Coach Blaylock then substituted Jones into the game for Miller.

Jones immediately forced a pop up, ground out and a strikeout to keep Southern out of trouble. Additional runs in the fifth and sixth innings sealed the deal for the Dawgs and they left the field with a 6-0 win against the Bears.

Game 3 (Sacramento State): The Dawgs played two games to finish the tournament Saturday. The first game of the day was against the Sacramento State Hornets (3-4).

The first four innings of the game were scoreless for both teams. It wasn’t until the fifth inning that Southern got going scoring three unanswered runs.

Megan Brown kicked off scoring in the fifth inning with her first home run of the season. Jenny Jansen then hit a pitch to center field to bring in her teammates Sidney Sikes for a run.

Massa furthered the lead as she hit a deep fly ball to score Vermejan, who was previously walked.

The Hornets managed to score one run in the sixth inning but the Salukis silenced any talk of a comeback as Massa and Jansen hit back-to-back home runs in the seventh to finalize the victory at 6-1.

In the game, the Dawgs had to fight their way back from a five run deficit.

The beginning of the game went seemingly well for the Salukis, scoring the first two runs of the game in the second on scores from Ashley Wood and sophomore Meredith Wernig.

In the bottom of the second, the Bisons took over the game scoring five runs to take the lead at 5-2.

Wood attempted to keep SIU afloat batting in her teammate Jansen to add another run to the Saluki score. North Dakota responded to Wood in the bottom of the third scoring three more runs and extending their lead to five.

Southern was not phased by the Bison lead and came right back at them in the top of the fourth inning scoring four runs to bring them one point away from their opponents. These runs were scored when Vermejan was walked with the bases loaded and Jansen forced the NDSU pitcher into an overthrow.

Vermejan scored again in the sixth inning as she stole three bases to cross home plate and tie the score at 8-8.

With the bases load in the seventh inning, Jansen smashed a 2 RBI single into the middle of the field to give the Dawgs a lead at 10-8.

Despite the Bisons scoring one more run in the bottom of the seventh, SIU was able to hold onto the lead thanks to consecutive groundouts forced by Jones.  The run by NDSU put the final score of the game at 10-9 with the Salukis coming out of the game triumphant.

Southern (7-2) ended the tournament with a 4-0 record and had three players awarded with All-Tournament honors.

The awarded included Briana Jones who was named Tournament MVP, and Ashley Wood and Jenny Jansen who were voted onto the All-Tournament Team. Wood went 8 for 13 on the weekend and Jansen went 7 for 17.

Southern will be back in action at the Frost Classic in Chattanooga, Tennessee. The tournament begins on Friday, Feb. 22 and the Salukis open against Ohio University (Athens) at 11 a.m.