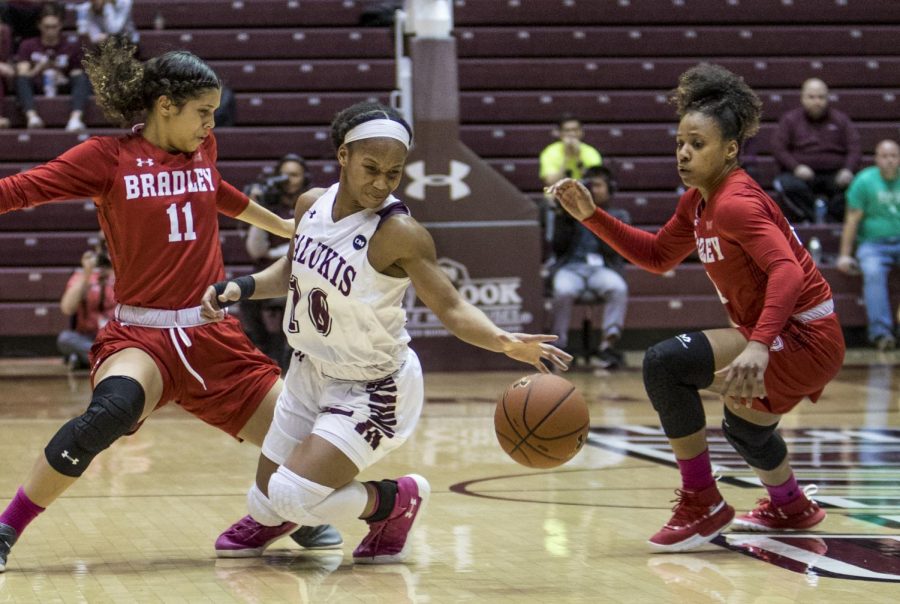 Saluki junior guard Brittney Patrick fights for the ball on Friday, Feb. 15, 2019, during the Salukis' 55-62 win against the Bradley Braves at SIU Arena.

The Salukis won the tip and junior forward Lauren Hartman drove down for the layup,but missed it Southern and Bradley then spent the next two minutes trading turnovers, until Hartman made a three-pointer to open the scoring.

Bradley answered the three-pointer by Southern with two made free throws and held the SIU offense forcing a shot clock violation.

After the two free throws by the Braves, almost two more minutes passed before either team scored – when a pass by freshman guard Caitlin Link set junior center Nicole Martin up for a layup to push Southern out to a 5-2 lead.

Sophomore guard Makenzie Silvey added a three-pointer and Martin put in another layup while holding the Braves to just one score as SIU led 10-4 with 2:50 left in the first quarter.

In what proved to be a defensive first quarter, the Salukis held Bradley to just one field goal and Bradley added three free throws as Southern led 10-5 at the end of the first quarter.

Bradley added their second field goal of the game off a layup by junior forward Chelsea Brackmann in which she was double teamed as SIU led 15-7 with 6:17 left in the second quarter.

The Braves scored three quick points off of a free throw and a layup by sophomore forward Emily Marsh but Martin stopped the run with a mid range jumper as Southern led by seven with 4:17 left in the second quarter.

Silvey missed her three-pointer as the shot clock rang but Hartman pulled the rebound out of the hands of the Bradley player and put up a layup for the score as the Salukis lead 19-10.

Southern pushed out a ten point lead after two free throws by Martin but the Braves then made three free throws of their own. Junior guard Brittney Patrick then made a layup, and Hartman added a layup for SIU as they lead 24-13.

Silvey made the last shot of the half, as Bradley chucked a shot past half court as time expired as the Salukis lead 26-26 heading into the locker room for halftime.

The first half was a defensive effort by both teams as the Dawgs held the Braves to only three field goals and forced eight turnovers while Bradley held SIU to 32 percent shooting from the field forcing nine turnovers.

Brackmann, one of the two Bradley players to score away from the free throw line in the first half, opened the scoring in the second half with a mid range jumper.

The Braves then made two three-pointers, with a layup by Patrick being the first score for Southern in the second half between the pair of three-pointers as the Salukis lead 28-24 with 8:07 left in third quarter.

Silvey drove in and passed it out to junior guard Kristen Nelson for the three-point attempt which she missed. Bradley then made a layup on the other end to pull within one four minutes into the third quarter.

“Especially in the second half, they were denying the passes,” Hartman said. “We needed to work together a little bit better and just move.”

Silvey turned the ball over which ended with a layup by the Braves to pull them back within two but a three-pointer by Patrick gave Southern some breathing room as they then lead 35-30 with 4:11 left in the third quarter.

A bounce-pass by Nelson to Martin set her up for the layup to push the lead back out to six, as the Saluki defense forced a three-point miss by Bradley.

Martin finished with a double-double leading the team with 18 points and grabbing ten rebounds.

Bradley scored on a three-pointer at the 8:31 mark of the fourth quarter, and two minutes later sophomore forward Rachel Pudlowski made a three-pointer for the Dawgs and Nelson added a layup as SIU lead by six.

A steal by Nelson at the 5:46 mark triggered momentum as sophomore forward Abby Brockmeyer scored and was fouled for the three-point play to push the lead out to 11, then Patrick forced a steal on the other end.

Brackmann made one of two free throws for the Braves and they added a layup, but a three-pointer by Silvey and one made free throw by Hartman pushed the Southern lead back out to 54-42 with 2:38 left in the game.

Brackmann finished with a double-double for Bradley with 14 points to go along with her ten rebounds.

Fouls clogged up the end of the fourth quarter, as SIU and Bradley combined to shoot five free throws, with Martin leading the charge for the Dawgs making both of her free throws as the Salukis clung to a 57-50 lead with 1:08 left in the game.

Free throws iced the end of the game for Southern, as Patrick, and Silvey both made trips to the line going a combined six of seven  from behind the line to help Southern secure the 62-55 win.

The win by SIU snapped not just their three game losing streak, but it also snapped the the three game winning streak by Bradley.

Southern will continue their home stand on Sunday against Illinois State, tip off at SIU Arena is set for 2 p.m.