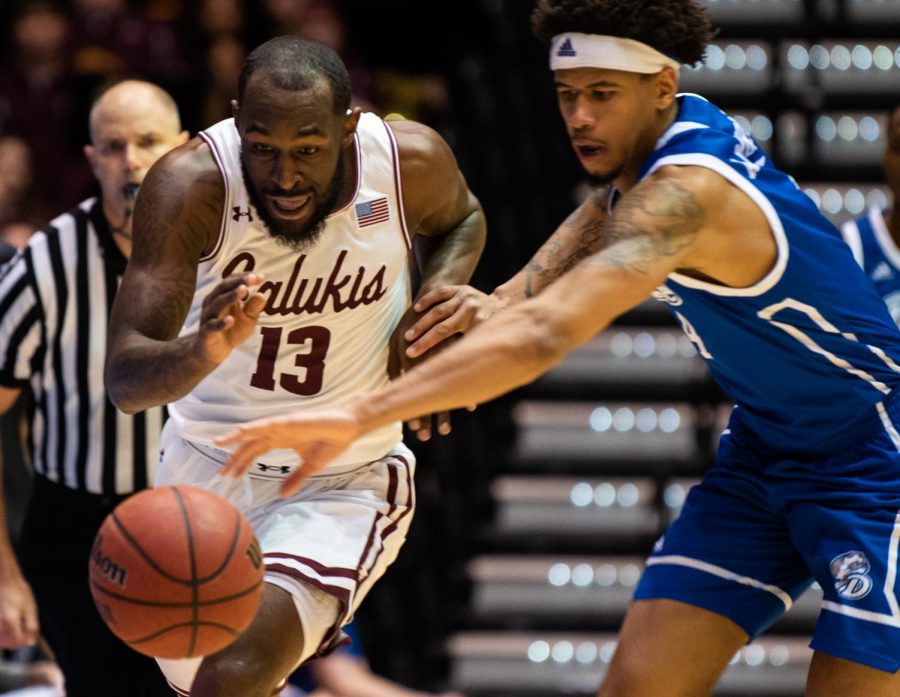 Saluki senior guard Sean Lloyd Jr.'s ball is stolen by the Bulldogs on Tuesday, Feb. 12, 2019 during the Saluki's 72-69 loss against the Drake Bulldogs at SIU Arena.

“I thought tonight was a typical Valley game, we couldn’t get much separation really the whole game,” Drake head coach Darian Devries said.

Coming into the game SIU had won three out of their last four games, including having won their last three games at SIU Arena.

In the last matchup between these two teams in Des Moines, the Salukis fell into a 10-0 hole early, and they trailed by as many as 26 and ultimately lost 82-70 on January eighth, with SIU leading the all time series 58-35.

The Salukis opened the scoring in the game after senior guard Armon Fletcher missed his three point attempt, junior guard Eric McGill grabbed the rebound for a tip-in for the score.

Both teams  were playing a quick game back and forth and a jumper by junior guard Aaron Cook, put the SIU lead to four but Drake answered with a 7-0 run led by five points from junior forward Tremell Murphy.

Fletcher was fouled on a layup that was set up by senior center Thik Bol, he missed the free throw for the three-point play, the Bulldogs then added four more points to push their lead out to 17-10.

Drake went on a 16-2 run to open the game out to a ten point lead, but a layup by Pippen and a three-pointer by senior guard Sean Lloyd jr pulled the Dawgs back within five.

Drake answered the cut in the lead by the Salukis with a 7-0 run capped off with a dunk by senior forward Nick McGlynn for the Bulddogs as they lead 27-15.

SIU started to cut back into the lead by Drake as the Salukis scored six of the next eight points, led by four from Pippen as Southern trailed by eight with 5:48 left in the first half.

The Bulldogs answered the short run by Southern with a layup by McGlynn and two made free throws by junior guard Anthony Murphy to push their lead back out to 32-21.

McGlynn finished with a double-double with 13 rebounds and ten points.

The Bulldogs answered the three-pointer by Fletcher with one of their own, and  Drake attempted a layup to end the half but senior guard Marcus Bartley was fouled on the layup as SIU trailed 42-35 heading into halftime.

“They all can shoot the ball really well, they spread the floor pretty good,” Fletcher said.

Ellingson opened the scoring in the second half with a layup but Pippen made a layup in which he was fouled, but he missed the free throw as SIU trailed 44-37.

Pippen finished with 19 points to go along with six rebounds.

“We try to give him the ball every time we come down the floor,we want him to shoot every time he touches it,”Fletcher said.

Cook missed his three-pointer as it rolled out, but Fletcher grabbed the rebound,but Lloyd missed the layup on a drive to the basket, then freshman guard DJ Wilkins scored on a layup as SIU trailed by nine.

Wilkins finished with his career best in points with 20, to lead Drake in points.

Pippen was fouled and made his first free throw, Fletcher grabbed the rebound on the miss and was fouled he then made a layup on the next play to cut the Drake lead to six.

Drake then scored seven points, with Lloyd adding a three-pointer in there, but it was not enough as the Bulldogs lead 62-51 with 9:38 remaining in the game.

Four points from Fletcher, a layup by Pippen and a steal by Cook that ended in a layup pulled SIU within three, but Drake answered with a layup in which they were fouled and made their free throw shot to make it 68-62.

“We can’t hang our heads too low, we all played as hard as we could,”Fletcher said,”I feel like we left it out there on the floor we just gave up a few easy buckets on the defensive end, our effort was great tonight.”

Fletcher finished with the team lead in points with 21 to go along with eight rebounds.

Fletcher then made a layup, and a travel by Drake turned into two points for Cook as Southern trailed 68-66 with 23 seconds left

SIU will be back in action on Saturday at Indiana State with tip off set for 11am at the Hulman Center.