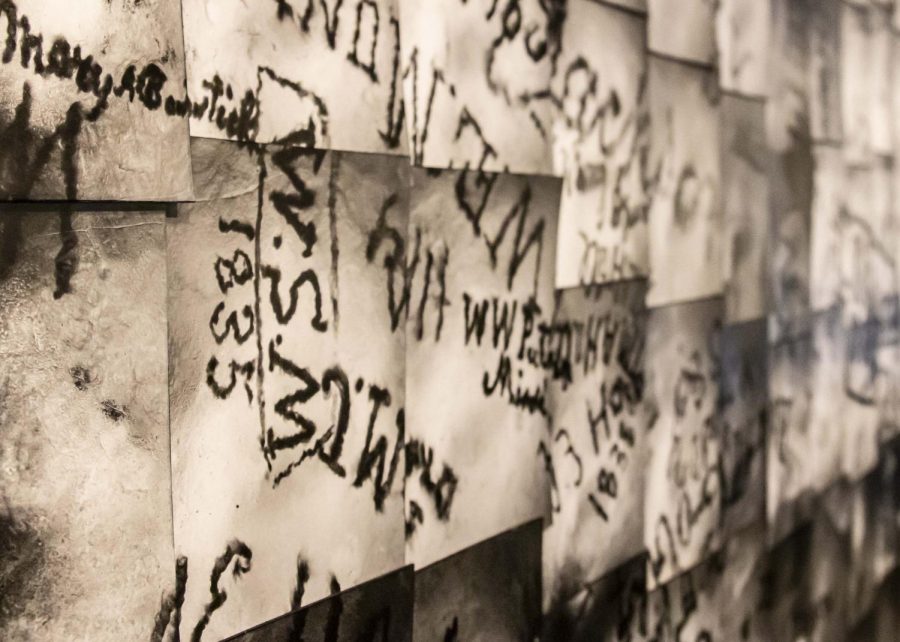 The largest piece in the exhibit by Charles Swedlund covers the entirety of a wall on Feb. 5, 2019 inside the SIU’s University Museum. The individual photos were grouped together to make one large piece.

After spending over 35 years absorbed in cave photography, Charles Swedlund, professor emeritus, is sharing hundreds of his photographs in an exhibit in the SIU Museum.

“The university museum has had a long relationship with the Swedlunds and has worked with Charles in the past for other exhibits. When the opportunity arose for him to have a show in the university museum we reached out to him,” Wes Stoerger, SIU Museum Curator of Exhibits, said.

The gallery contains over two hundred photos from different caves throughout the country, Stoerger said.

It’s hard to have an exact count of how many photographs are used because most of the pieces have multiple tiles within the picture.

“It’s easily in the two hundreds and could be more than that. It’s hard to give an exact number depending on how you look at it,” Stoerger said.

The largest piece in the show is a 26-foot long collage, made up of seven-inch tiles and each of those tiles represents a meter of the ceiling, Stoerger said.

“Some people look at it as graffiti or vandalism, but these names have been very helpful to add another layer of history,” Swedlund said.

Swedlund completed a graduate program in non-structured art – this fits right in with that, he said.

“There’s years of work in this,” Swedlund said.

“I started going there with my family as tourist and while on the tour I would try to take photographs,” Swedlund said.

He said showed some of the photographs in class one day and a student came up after class and asked if he had ever been in a wild cave.

“We went in one up by Kinkade lake, Ava Cave, and that was the first time I was ever in a cave that was non-developed and I liked it,” Swedlund said. “After crawling through mud, you smell life. You start to smell vegetation, plants and then you start to see a glimmer of light. In that cave you could crawl out in the middle of a forest.”

The display process took about two-and-a-half weeks to get everything done, Stoerger said.

“It happens in stages,” Stoerger said. “The first thing we did was hung the smaller pictures on the walls to get that kind of roughed in, then we moved onto the bigger pieces which each took more time ending on the specifics with each one of them.”

Before the museum was shut down, in mid 2017, they got in contact with Swedlund about having a show, Stoerger said.

“I wish I could do it all over,” Swedlund said. “There are things I wish I could have added but what is there is what I wanted it to be.”

“Both of these caves are within 10 miles of each other,” Swedlund said. “I wanted to show two caves from the same area could be so erratically different visually.”

Swedlund’s work will be on display at the university museum until late July.

“It’s over 50 caves, you know how do you make sense of that?” Swedlund said. “I didn’t want it to look spotty, I wanted there to be enough photographs for a person could feel what the place is like and so the gallery here is just amazing for what I needed to have.”

The University Museum is located at 1000 Faner Dr., Faner Hall, Door #12. Gallery admission is free and open to the public Tuesday-Friday, 10 a.m. to 4 p.m. and Saturday 1 to 4 p.m.  Public metered parking is available across from the Student Center and beside Woody Hall.