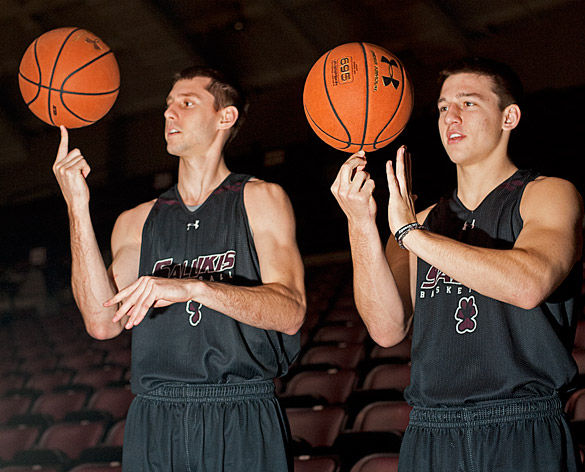 About 55 miles from the steps of SIU Arena sits Woodlawn, a town of about 700 people with a rich basketball tradition and the lifelong home of the Verhines brothers.

Bronson and Dawson Verhines are enjoying the ride of their first season as members of the SIU men’s basketball team. Bronson is a senior in his final year of eligibility while Dawson is a junior with two years left.

Both brothers said the town of Woodlawn shaped them into the players and people they are today.

“It was a small town,” Dawson said. “All I can remember is playing basketball in the grade school parking lot every day with all your friends and teammates, so we’ve been taught basketball since day one.”

Basketball was not the only sport the brothers played in high school. Bronson was a pitcher on the baseball team and Dawson played football, baseball and basketball.

Warriors coach Randy House, an SIU alumnus who played for the Salukis from 1985 to 1989, said Bronson and Dawson Verhines are not just good players on the court but also good people off the court.

“First and foremost from the basketball standpoint they are winners, they won in grade school, they won in high school and they helped us win a national championship at Rend Lake,” House said. “From a personal standpoint, they come from a great family, [their] mother’s a school teacher, [their] father’s a preacher so they have good core values and are good kids.”

Bronson had a very long and winding road before finding himself in Carbondale. After graduating from Woodlawn High School, he played at Kaskaskia College then stopped playing basketball completely during a year at Rend Lake followed by a year at SIU Edwardsville.

He reconsidered his options and decided to play at Rend Lake last season with his brother. Bronson said he was not sure how he would play going back to Rend Lake.

“I didn’t really know what my expectations were going into Rend Lake, I knew I was going to get to play with Dawson and I was hoping to have a good year because I hadn’t played a competitive basketball game in two years,” Bronson said. “I didn’t know how it was going to go.”

It is rare for brothers to be able to play on the same Division I basketball team. Bronson was awarded a scholarship to SIU and Dawson is a walk-on. The last brothers to play for the Saluki men’s basketball team were Wayne and Corky Abrams, who played together the 1976-1977 season.

“Not many kids get the chance to say they played at SIU, let alone play with your brother,” Dawson said. “That’s such a great expierence, we’re very blessed.”

Coach Barry Hinson said the Verhines brothers are not at SIU simply because they are local.

“If you’re going to recruit local, the guys have got to be able to help you and we feel very fortunate because we didn’t really recruit these guys until the very end,” Hinson said. “(We took them) because of a recommendation by one of our own former Saluki players, Randy House, and Randy was so adamant and said these guys will help your program.”

Dawson said he could relate to the younger fans in the crowds during games because he used to be one of them. He said he remembers going to Saluki games to see Bryan Mullin and Jamal Tatum.

“I try to always be nice to the kids in the stands because I know what it’s like to be one of those kids,” Dawson said.

The season started off rocky for the Salukis but Bronson has started all three games and Dawson has logged quality minutes off the bench.

Bronson is leading the team in rebounds with 25 through three games and is averaging just more than six points per contest.

It is a difficult spot for Bronson because he comes into SIU with only one year of eligibility left. He said all he wants to do is make the most of his chance this season — when he was offered a scholarship from SIU before the season, he wasn’t going to turn it down.

“First and foremost I want to enjoy the experience, playing here at SIU is going to go by really fast,” Bronson said. “I have one year at my dream school to play and I’m going to make the most of it and enjoy every second.”

The last thing House said about the brothers did not involve basketball. It was about their character.

“If your daughter brought one of those guys home, you would approve,” House said.