Despite conference wins, Salukis shut out of FCS playoffs 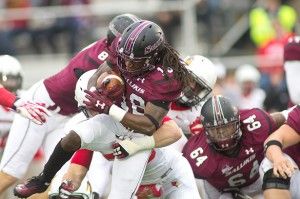 After a 31-9 drubbing of Indiana State University Saturday afternoon, the SIU football team had hopes to qualify for the Football Championship Series playoffs come selection time.

That case fell by the wayside Sunday morning as the FCS Selection Committee withheld the Salukis from the playoffs for the fourth consecutive year, and ended their season.

Coach Dale Lennon said the team was disappointed that they did not impress the committee enough to solidify its spot in the playoffs.

“The toughest thing as a coach is where you break the news to them that you don’t make it and you see the looks on their faces,” Lennon said. “It’s tough to explain, but the bottom line is we needed to win more games and we understand that.”

The Missouri Valley Football Conference did not fare well altogether in the selection process. Only two out of five potential playoff teams made the 24-team field, leaving three playoff-caliber teams upset, and forced to begin preparing for next season.

“The thing that’s disappointing is we play in a league that’s brutal,” Lennon said. “You look at early season; the polls will have six teams (in the MVFC) ranked in the top- 25, eight teams getting votes, but then when it comes to the end of the season, there’s no love for the league. It’s because the teams end up beating on each other.”

The Salukis did just that in front of a little more than 200 fans in Terre Haute, Ind., against a 1-11 Indiana State team that did not win a game against a Division I opponent all season.

The Salukis could not separate themselves from the Sycamores until the second half leading ISU 7-3 at halftime. Lennon said subfreezing temperatures played a role in the Salukis’ first-half performance.

“The weather was a big factor and it changed certain elements of the game,” Lennon said. “If you look at the first half, it was very indicative of what weather can do. We moved the ball up and down the field, but we went into the half only up 7-3. You had to be aware of the environment and that affected play calling.”

Senior quarterback Kory Faulkner returned midway through the second quarter from a month-long finger injury to spark the Saluki offense after freshman quarterback Ryan West strove to find a rhythm.

“Ryan struggled and we needed something to boost the offense,” Lennon said. “Kory came in and picked up where he left off. His comfort level with the offense was good. He was able to make plays with his feet. He was the complete package when he came back. It was good to see.”

“John is one of my best friends, and he’s my roommate,” Faulkner said. “I try to give him as many touches as I can. He’s one of the receivers I trust a lot. I trust that he will always be in the right spot.”

Prior to playoff selections being made, Faulkner said he hoped that Saturday would not be his last time wearing the Saluki maroon.

“I’m hoping this isn’t the last time I put on this jersey,” Faulkner said. “It would mean a lot to keep going. We feel that we are one of the top teams in the country. If we get a chance to keep going, we’re going to make some noise in the playoffs.”

Unfortunately, the Salukis will not have that opportunity.

Lennon said the realization that the season is over stings, but the fact that not being given the chance to compete for the championship—although they are a championship-caliber team—hurts even more.

“We know we are a playoff-caliber team. We know if we had made the playoffs, we could make some noise. We could advance; we could have a chance to make a run at this,” Lennon said. “The frustrating thing is that you just never get to show what you’re capable of.”