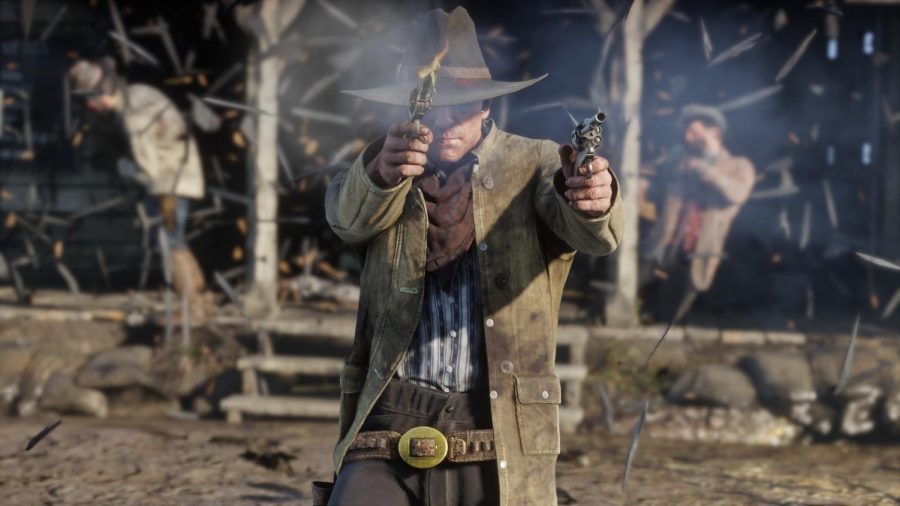 I played a lot of Rockstar Games’ Red Dead Redemption II last year and while the story is a slow-burn of betrayal and lost morality that I thoroughly enjoyed, I never found myself wanting to go out into the wilderness to explore.

In other successful open world games, such as CD Projekt Red’s “The Witcher III: Wild Hunt,” they find specific loops- or metaphoric carrots on sticks- to keep the exploring of the map not just a novelty, but a necessity.

Red Dead Redemption II doesn’t have an overarching gameplay loop that forces your connection to the world. The only real loop in this game is how much money you have: Hunting animals gets you money; robbing wagons, strangers or trains gets you money; and doing side missions sometimes gets you money.

While these are inherently fun, the rewards are not worth your time and effort. The reward is just money, but the best way to get money is by ignoring every activity I just mentioned. Instead just make a B-line for every main story mission, because they yield rewards infinitely better than anything out in the world will.

In contrast, The Witcher III: Wild Hunt’s open world has hundreds of quests, most of which are really varied and wrapped in brief, dark stories. It also makes quest completion the only real way to level up, and in turn the only way to use stronger weapons and powers, like straight-up mind control.

And since the game doesn’t go easy on you, there’s an obligation to get better. Thus, you go take on any quests and bounties you can find, and beyond the inherent appeal of seeing more of the stories you can experience you also make progress toward that higher goal of leveling up.

Since Red Dead has this need to make sure you don’t have to do anything besides the main story, none of the side content matters. Your overall goal is either beating the game, or getting money, and you complete these efficiently by ignoring everything waiting for you out in the map.

Compounding this is how the story is completely contradictory to goofing off hunting or robbing.

In the story every character in your struggling outlaw camp is like:

“We’re going to all die if we don’t have any food.”
“You’re basically the only one that can save us, we need money ASAP or you’ve failed us.”
“Where’s the whiskey? I’d get it myself if I didn’t have lumbago.”

In a weird way, this is my praise of the story  – the acting and script give the story a sense of urgency. As the player and as Arthur Morgan you feel a need to not let anyone down. So, I’d feel like a schmuck for goofing off in the forest for a month, plus I’d be at a disconnect with Arthur’s motives.

On top of this, while there are meters for the camp’s food, ammo and medicine supplies – they don’t do anything if they’re depleted. No one dies or leaves, nothing ever goes wrong by your inaction. So while in the script it sounds like a big deal, there are no consequences or stakes in helping the camp.

Red Dead Redemption II would work better if it was structured similar to Arkane Studios’ 2012 sleeper hit, Dishonored. There’s a similar hideout in Dishonored to Red Dead’s camp, but in that game, since it isn’t an open world, you have to return between each chapter.

By making the interactions with its members necessary, Dishonored makes you learn more about each character. Red Dead’s camp has a cool array of interactions and minigames that you’ll miss all the time because you’re not pushed to interact and learn about your fellow outlaws.

Red Dead’s story missions are also so scripted to the point of taking you places you can’t even return to in the open world, and the side content doesn’t feed into the gameplay loop. As a linear game, it would be leaner, meaner and better. With how little of the open world helps your overall goal, it basically already is one but with long transitions of Arthur on a horse.

Or, I could just be full of it and hate the horseback riding.

You’re Dumb and Wrong is a weekly column about video gaming, music and popular entertainment from the mind of Jeremy Brown.

Arts & Entertainment Editor Jeremy Brown can be reached at [email protected] and on Twitter at @JeremyBrown_DE.