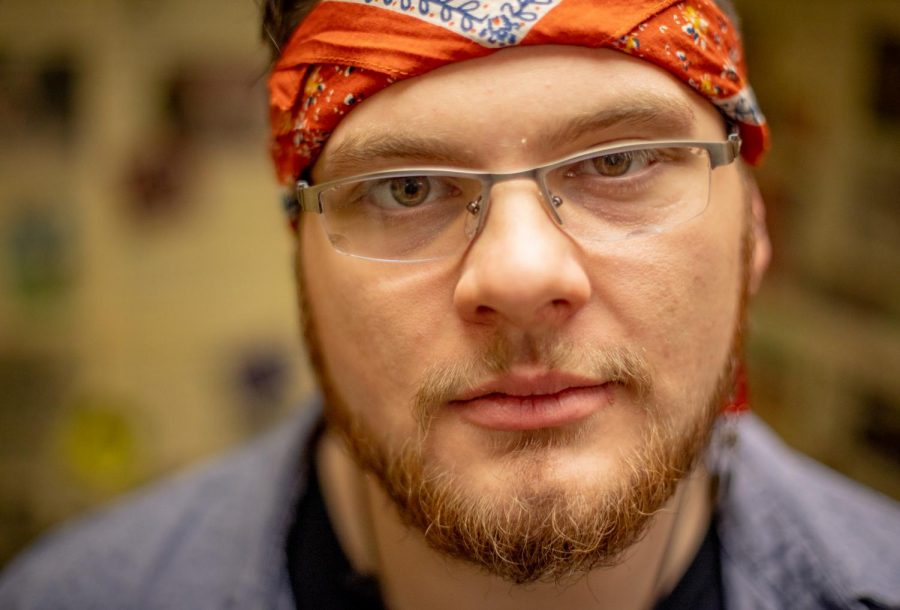 Jacob Palmeno, a junior from Rockford is studying information technology and creative writing, poses for a portrait on Monday, Jan. 15, 2019, at the Daily Egyptian newsroom in Carbondale, Illinois.

Jacob Palmeno, known to some as “Jake the Plug,” is a young poet who twists his words into a ball of never ending rhymes – now he’s adjusting to life as a freelance artist in the Carbondale area while juggling working towards a degree.

The junior from Rockford is studying information technology and creative writing at Southern says he has found it relatively easy to succeed in southern Illinois.

“I kind of always did it,” Jacob Palmeno said. “I was freestyling all of the time.”

Palmeno continued rapping in Carbondale with the long-term hopes of finding a girlfriend, he said.

“That happened, so now I don’t really know,” Palmeno said. “I guess just keep spreading the sound until I blow up and act like I don’t know anyone.”

Morgan Goodpastor, Palmeno’s girlfriend, said they met through the internet.

“He is incredibly intelligent and extremely creative,” Goodpastor said. “He’s really driven creatively with the things that he cares about – like he really, really cares about them and won’t stop until he has accomplished something.”

Goodpastor said Palmeno is an extremely charismatic person and can always navigate any social situation perfectly.

“He constantly blows me away with the stuff that he does,” Goodpastor said.

Palmeno said he wants to ultimately land a remote job in the IT field while he follows his dream of writing novels.

“Rap has just been a college thing, that I have been messing around with as a joke, but people are taking it more and more seriously,” Palmeno said.

Eminem, American rapper and songwriter, has played a big influence on his dive into the rap scene, Palmeno said.

“Eminem resonates with my soul,” Palmeno said. “I enjoyed rap music from then, and I was also into poetry. […] All of my friends were teasing me telling me that poetry is for girls, so I had to make it a little cooler by being aggressive with it.”

Palmeno said balancing his rapping career and schoolwork is similar to any other student working a job.

“It’s been too easy because I haven’t promoted myself much or tried to find people [to get] these shows,” Palmeno said. “It just keeps falling into my lap and people keep bringing me places and connecting me with people.”

With the success, Palmeno said that there comes an uncertainty – not knowing when it all will end.

“That is really weird to rely on freelance art to pay for stuff because you don’t know when it will end,” Palmeno said. “You don’t know when people aren’t going to show up to your shows and pay money to see you.”

Palmeno said he paid his rent for the last four months with show and merchandise money.

“Do I want to continue it? Yes, but it’s such an uncertain feeling,” Palmeno said.

Brett Phifer, a junior studying communication design and Palmeno’s official “hype man,” said that Jake is one of his best friends but at the same time, one of the best people he has performed with.

“It’s constantly a ying-yang kind of thing that we have been doing for the past year and a half,” Phifer said. “I do all of my shows with Palmeno – every show I do, Palmeno backs me up and vise versa.”

Phifer said Palmeno is a ball of rhymes and that never runs out.

“You can’t seem to tap him of any material – ever,” Phifer said.

Phifer said Palmeno’s shows have a vibe that you constantly have to be catching the entire time.

Palmeno said that when the video was posted on Facebook, it received 30 thousand views but that was not expected.

“Well, the first 18 thousand views came in the first four days and so it was an overnight success because of some Carbondale pages that shared my thing,” Palmeno said.

Palmeno said he would go out and people would say “Hey, that’s Jake the Plug.”

“I got acknowledgement, something that I have always wanted,” Palmeno said.

Palmeno said he will sit on a song for a while until he feels it’s right but once he gets it recorded he will call an SIU student videographer and shoot a video in one day.

Palmeno said in some ways, getting out of Carbondale is difficult.

“I can play anywhere here and get 200 people to show up, but if I go two hours up north no one really knows me,” Palmeno said. “I’m just a sensation in a very small alcoholic community that refreshes itself every four years. It’s a limited oddly easy experience.”

Staff reporter Emily Cooper can be reached at [email protected]